“I’ve had the notion to be a doctor in the missions since I was three feet high,” Harry Blaber once wrote. “Tried to shake myself out of it, but it wouldn’t shake.” After becoming a physician, he approached the Maryknoll Society with an offer, “I make you a present of the next five years of my life. You can do what you want with me during that time.”

The Maryknoll Fathers and Brothers happily took him up on the offer, sending him to their missions in China’s southern Guangdong (Cantonese: Kwangtung) province.

In August 1930, the young physician from Brooklyn, New York, joined a group of Maryknoll priests to travel by boat to Hong Kong and then on to Jiangmen (Kongmoon), where Maryknoll’s James Edward Walsh was the bishop. Dr. Harry Blaber became Maryknoll’s very first lay missioner.

In Jiangmen, Harry studied language with Maryknoll Father Otto Rauschenbach, who found him a “capable, commonsense, energetic man” and “truly a godsend.” In a small house at Maryknoll’s Tung On mission in the mountains, he soon opened a dispensary. He partitioned the place into a consultation room, clinic, surgery, pharmacy, laboratory and six-bed ward. His patients, who began to call him “the doctor of a thousand cures,” lined up in the street at the rate of over 50 per day.

“He began to organize the [clinic] with a sufficiency of nothing, save trust in Providence and confidence in Blaber,” Bishop Walsh reported in The Field Afar. Harry displayed his knack for innovation from the beginning of his mission service. In 1932, when Maryknoll built Sacred Heart Hospital in Taishan (Toishan), he repaired and hauled a discarded operating table from Canton, lighted the surgery with two electric bulbs plus nurse-held flashlights, and sterilized instruments with a Montgomery Ward fireless cooker.

He was innovative with people, too. Starting with a staff of three farmhands, he gathered and trained nurses, a pharmacist, and a budding bacteriologist. One of his first patients at the new hospital, a 15-year-old named Kei Shaang, whom he treated for an ear infection, stayed on to become his head nurse.

Colorful reports from the Chinese missions in Maryknoll’s The Field Afar magazine during the 1930s recount Harry’s tireless, round-the-clock commitment to serving those living in poverty, his ingenuity in improvising care and his big heart for the people he served. The magazine’s stories cover his heroic rescue of a drowning soldier by swan-diving off a big junk in the middle of a large river, a nefarious plot against the “foreign devil” from a group of threatened practitioners of traditional Chinese medicine, and an encounter with pirates. 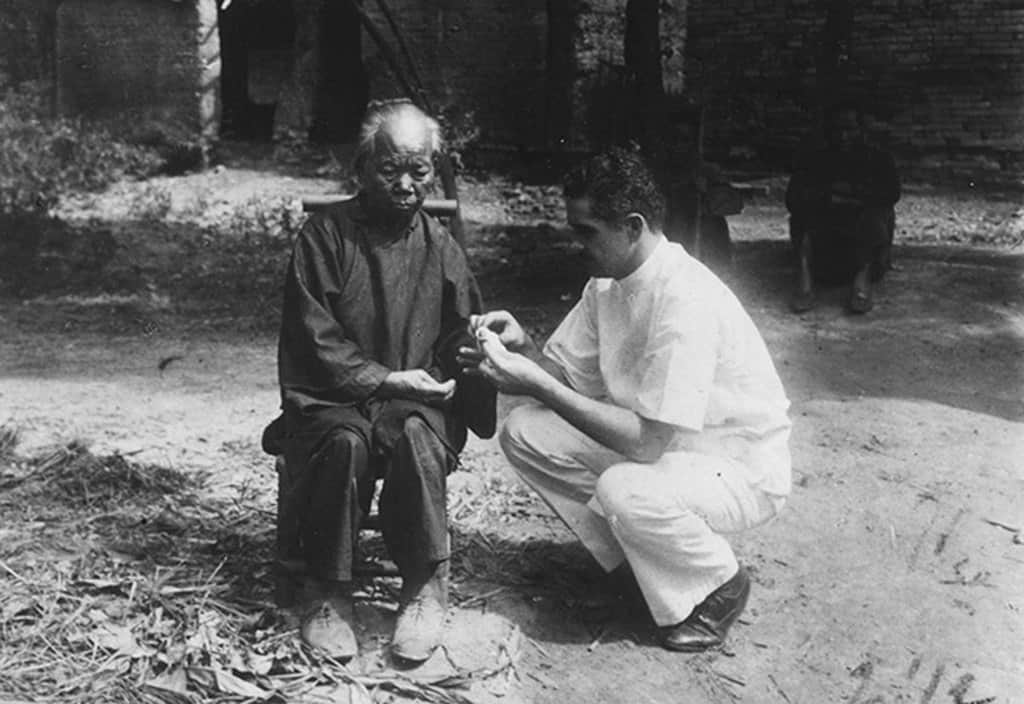 Dr. Harry Blaber with a patient at the leprosarium in Xinhui. (Maryknoll Mission Archives)

In 1934, a Filipino physician, Dr. Artemio Bagalawis, joined Dr. Blaber as the second Maryknoll lay missioner, eventually focusing all his time on treating those with Hansen’s disease at Xinhui.

In 1935, as agreed, Harry went home to Brooklyn, where he met and married Constance White, a nurse. They spent their honeymoon studying leprosy treatment at Molokai, Hawaii (where Father Damien had ministered in the 19th century), and returned to Taishan’s Sacred Heart Hospital in 1936. Constance worked as a nurse and instructor at the hospital.

Two years later, however, the Japanese invasion forced the couple, with their baby daughter, to return to Brooklyn, where Harry established his medical practice and served on the staff of Victory Memorial Hospital.

“We lived through some mighty tough days in China,” Harry recalled shortly before his death in 1961. “We tried to run a hospital with Mercurochrome and homemade bandages — but they were satisfying days.”

Dr. Bagalawis remained a missioner for 31 years, becoming Maryknoll’s first long-time lay missioner. He practiced at the Xinhui clinic until 1951, when he fled from the Communists to Hong Kong. Four years later, he reunited with Maryknoll Father Joseph Sweeney (with whom he had worked in Xinhui) to continue to serve people with Hansen’s disease at St. Lazarus Village in Anyang, South Korea until 1965. He died in San Diego in 1999.

Maryknoll Lay Missioners is a Catholic organization inspired by the mission of Jesus to live and work with poor communities in Africa, Asia and the Americas, responding to basic needs and helping to create a more just and compassionate world.