MEXICO CITY (CNS) — Bolivia’s bishops issued an urgent appeal for protesters to remove roadblocks, which have caused fears of shortages of medical supplies and oxygen in highland regions of the South American country amid the COVID-19 pandemic.

The roadblocks—a common form of protest in Bolivia, where mountainous terrain creates choke points for transportation—were called by supporters of former President Evo Morales and established in response to a decision to postpone elections that had been scheduled for Sept. 6.

Elections were originally scheduled for early May, but have been postponed three times due to the coronavirus outbreak.

“The life of human beings is an absolute value, which must never be used to achieve another objective,” the bishops said in an Aug. 10 statement, which described those “putting in danger the lives of persons” as “committing a criminal and inhumane act.”

“It’s irrational and inhumane to use the pandemic to destabilize the country’s institutions due to consequences such as the loss of life of fellow Bolivians.”

More than 100 roadblocks across the country have provoked panic purchases of food and gasoline in the La Paz region, according to media reports. Shortages of oxygen and ambulances not being able to pass have claimed lives, according to the Bolivian government.

Protesters, who deny accusations of preventing ambulances from passing, have expressed anger over a Bolivian electoral tribunal decision to postpone elections until October. Luis Arce, candidate running for Morales’ Movement Toward Socialism Party, leads polls for the presidential contest.

Morales was ousted from office in late 2019 after seeking a fourth presidential term and appearing to win an election rife with irregularities. His successor, interim President Jeanine Áñez—who trails in polls for the presidency—has called for a national dialogue.

She has also threatened to clear the roadblocks by force, though critics accuse her of using the pandemic to prolong her caretaker government, according to media reports. 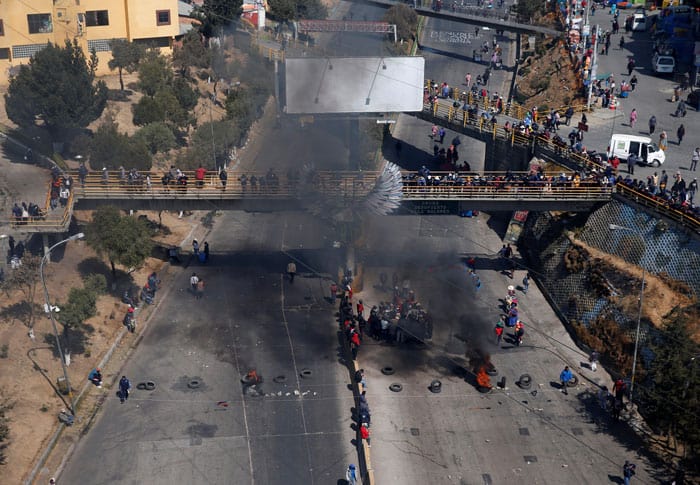 Father Iván Bravo, Archdiocese of La Paz spokesman, described the blockades as “merely political” with the purpose of “power and the destabilization of the transitional government.”

He added: “The pandemic still doesn’t permit it. The health situation still isn’t controlled (and) there are various cases of community spread of COVID-19.”

The bishops—whose relations with Morales haven’t always been the best—called the electoral authorities to “set a date for elections” and for other branches of government to respect the decision.

“We exhort union directors to drop their violent attitudes, lift the blockades and accept a serene dialogue in search of solutions,” the statement said.

The political-electoral conflict comes as COVID-19 has claimed more than 3,500 lives in Bolivia and lays bare an underfunded and underequipped health service.

“It worries us,” the bishops wrote, “the influence of the political crisis in the lack of authority and effective solutions to the alarming health crisis we’re suffering, which is provoking uncontrolled contagion, the lack of attention in health centers and the loss of many lives.”

Featured image: An Aymara woman wearing a protective mask stands at the blockade point set up by supporters of former President Evo Morales in El Alto, Bolivia, Aug. 10, 2020. The protesters are demanding quick presidential elections, which have been postponed multiple times due to the COVID-19 pandemic. (CNS photo/David Mercado, Reuters)