Catholic activist behind women empowerment in South Sudan nominated for award from the U.S. Institute of Peace

The U.S. Institute of Peace (USIP) has nominated a South Sudanese Catholic woman known for her years of peace activism in the country and beyond alongside three other African women in a global competition launched “to recognize the vital role of women who are working in fragile or conflict-affected countries in pursuit of peace.”

Co-founder and Executive Director of Eve Organization for Women Development, Rita Martin Lopidia Abraham, emerged on the list of USIP’s Women Building Peace Council alongside nominees from Uganda, Burundi, Rwanda and the Democratic Republic of the Congo (DRC).

In their announcement of 10 finalists of the award, including women from other conflict-inflicted countries in the world, USIP officials lauded Ms. Lopidia for her role in inclusion of women in the South Sudan peace process “despite threats to her life.”

“Rita Martin Lopidia is a passionate and dynamic civil society leader recognized for being the driving force behind the inclusion of women in the South Sudan peace process,” USIP leadership observed in the message announcing the 10 nominees.

“Despite threats to her life, Rita has shown an exceptional capacity to convene a diverse group of actors from across traditional lines of division. She is a leader among activists and civil society at the community level, as well as among national and international actors. Her tireless and thoughtful efforts for peace have resulted in measurable steps toward peace in her homeland,” USIP leadership further stated.

Speaking to ACI Africa ahead of the virtual ceremony to announce the first recipient of the $10,000.00 that will take place on September 15, Ms. Lopidia expressed her excitement after hearing the news of her nomination from a colleague.

“I am so excited and nervous at the same time to be one of the nominees for the peace building Award for Women,” Ms. Lopidia said, and added, “I am looking forward to the major event in September to see what will come of it.”

According to information on the USIP website, the Women Building Peace Award builds on 10 years of the institute’s existing work to empower women, elevate their voices, and support their roles in local and national peace processes.

The competition received over 150 nominations of women peacebuilders from 51 countries. The 10 finalists were selected by USIP’s Women Building Peace Council, an 18-member group of experts and leaders in the fields of gender and peacebuilding. 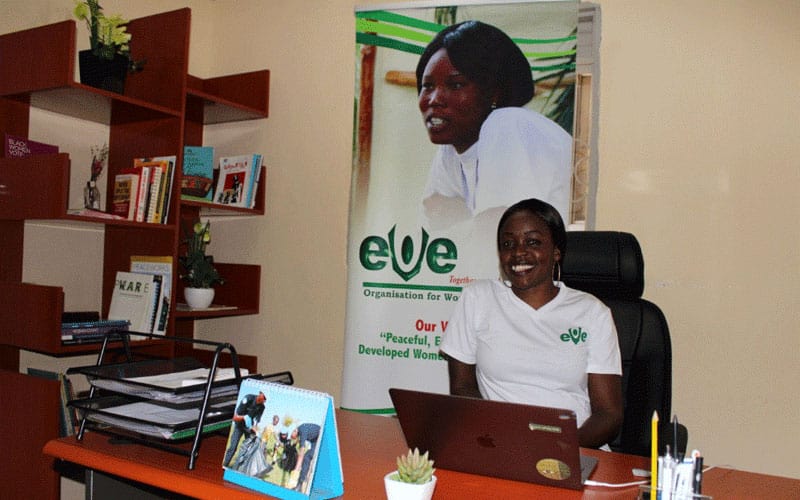 In an exclusive interview with ACI Africa Monday, July 20, the 38-year-old South Sudanese described the Award as not only an achievement for her organization but for the whole of South Sudan in the country’s pursuit for peace.

She added, “For the women, girls and the youth of South Sudan, I think it is also a motivation that we as a nation can do more and as young people there is a huge role they can play in making South Sudan a better place.”

Located at the Bishops’ Secretariat in Juba with offices in places where South Sudanese refugees are hosted in Uganda, Eve organization works in areas of women leadership and political participation, policy and research and refugees intervention among other fields.

“We work in five states in South Sudan, three Equatoria states, Jonglei state and Western Bhar el Ghazal, and in Uganda we work in three refugee camps which have a lot of South Sudanese,” said Ms. Lopidia.

Her work in peacebuilding started long before she co-founded Eve organization at the age of 23 in Sudan’s capital, Khartoum.

Raised in a Catholic environment, Ms. Lopidia linked her personal and organizational success to the support by the Catholic Church in both Sudan and South Sudan over the years.

“It is through the Catholic Church that I became a peace activist because back then in the 1990s in Juba, I remember very well the then students’ movement, when the students protested the Arabization of the syllabus; it started within the Catholic Church,” she recalled.

“We would go to Saint Joseph (a Parish in Juba), I was around eight years old,” she further recalled, and added, “Through the Church I was able to build confidence and at that age we would go out matching on the street singing ‘freedom for my people’.”

The peace award nominee attributes her achievement to the organization’s contribution in the South Sudanese revitalized peace process, working with the refugees plus how her organization brought about the focus on peace processes.

“We were able to contribute substantially in the negotiations, and had women as signatories to the peace agreement and also pushed for a number of articles that cover the issues of women,” she said of the organization founded in Sudan 15 years ago, with a name derived from the Biblical first woman, Eve.

The contributions, she says, include the struggle for the South Sudanese famous 35 percent affirmative action for women, opening up of humanitarian corridors, the issue of reparation and establishing the women enterprise fund, transitional justice and issues of sexual violence during conflicts.

Although Eve organization is an independent institution, it works together with a number of women organizations and the general civil society to be able to have that impact in peacebuilding in South Sudan, Ms. Lopidia explained.