Advocates for children, including Catholic sisters representing their congregations at the United Nations, are worried that the COVID-19 pandemic and subsequent lockdowns may be contributing to an uptick in the sexual exploitation of children online and in social media.

Online sexual exploitation of children is “a crime of opportunity,” the Washington-based International Justice Mission said in a statement discussed during a July 15 online forum sponsored by the Maryknoll Sisters.

“With increased access to children who are locked down in their homes, and with sex offenders offering easy money, criminals sexually abusing children continue to do it,” the group said.

“COVID-19 lockdowns [have] created a perfect storm for the increase in online sexual abuse of children. Quarantined online child sex offenders are spending more time online and vulnerable children are also confined at home, often with their traffickers.”

Maryknoll Sister Marvie Misolas, representative of the Maryknoll Office for Global Concerns at the U.N., said as the panelists on the forum gathered here, discussing children’s abuse on the internet, “we [can] be sure that hundreds of children are still being victimized online. In the ongoing period of pandemic, national governments have directed education programs to shift to online learning for health safety.

“As more children will be exposed through the internet, we need to protect them from the danger of being abused.” 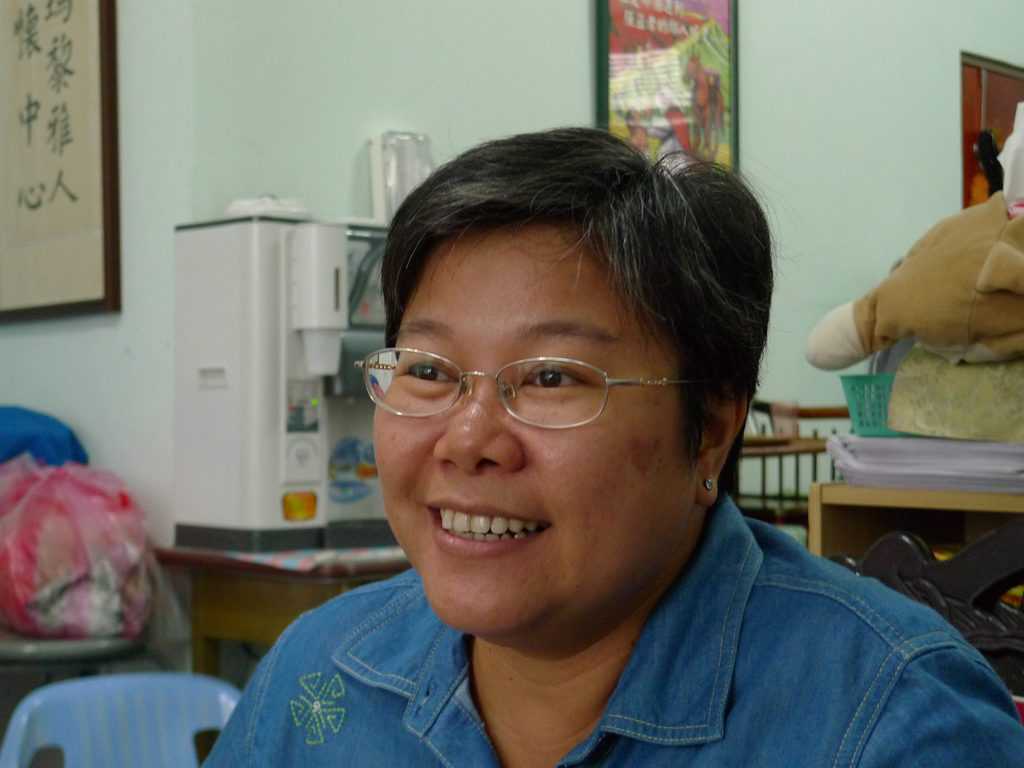 File photo from 2009 shows Maryknoll Sister Marvie Misolas, the representative of the Maryknoll Office for Global Concerns at the U.N., at Samaritan House, a shelter for homeless women, Taichung. (Sean Sprague/Taiwan)

The online forum was part of the United Nations’ yearly evaluation of progress in achieving the world body’s 17 sustainable development goals, which aim to reduce poverty and eliminate other social ills.

The yearly event, known as the High-level Political Forum on Sustainable Development, held this year from July 7 to July 16, provides a venue for U.N. member countries to highlight local progress as well as an opportunity for advocates to address concerns.

And address them they did. Misolas, in a statement prepared for the event, noted that technological change has made the world “virtually connected in an ever-increasing speed and in real-time” and said this has become even clearer during the pandemic: “We have experienced during this pandemic period how technology made almost everything possible come about.”

But, she said, there is “a darker side of these technologies, which have fallen in the hands of people who use technology to exploit children over the internet.”

John Tanagho, a panel participant and an International Justice Mission office director focused on cyber sex trafficking in the Philippines, quoted UNICEF, the United Nations’ humanitarian organization for children, which has called the Philippines “the global epicenter of the live-stream sexual abuse trade.”

Tanagho called the crimes an example of “modern-day slavery” and said those engaged in exploiting children are often family members who are “locked down” with children at home. He said these family members will exploit children for money from customers seeking images or livestreaming of sex acts. 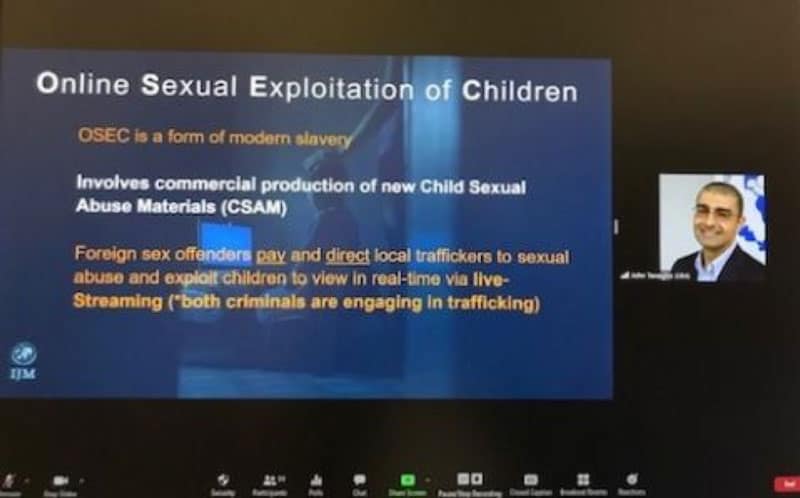 Screenshot of John Tanagho, a field office director for the International Justice Mission’s office in the Philippines, during the July 15 online forum (Courtesy of Marvie Misolas, Global Sisters Report)

A recent International Justice Mission study of exploitation in the Philippines concluded that online sexual exploitation of children was “usually a family-based crime” and that “without intervention, the abuse usually lasted for years.” The report also noted that the customers tended to be older men, most from Western countries.

Though such crimes occur on what is called the “dark web” of illegal pornographic sites promoting the exploitation of children, much of the activity also happens on common social media platforms, Tanagho said. He noted that his organization’s research found that, in the Philippines, the median age of those being exploited is 11 years, and 9 percent of those being exploited are aged 3 or younger.

Tanagho said traffickers come from all economic backgrounds hurting from the pandemic. While that would include those experiencing economic poverty, it would also include the middle class. Tanagho said he believes the majority of those experiencing poverty would not exploit their children, and it’s likely many of those engaging in exploitation are those “who have no qualms to engage in abuse for ‘easy money.’ ”

Samson Inocencio Jr., the national director of the International Justice Mission’s office in the Philippines and who did not participate in the July 16 event, said in a separate statement that the “unprecedented surge in online abuse of vulnerable Filipino children” has been confirmed by the eSafety Commissioner, Australia’s national independent regulator for online safety.

That group “recorded an 86-percent increase in image-based abuse over the three weeks preceding April 9, 2020,” Inocencio said in the statement. “The Australian Federal Police (AFP) and the Australian Center to Counter Child Exploitation have seen new child abuse forums established as a result of COVID-19 stay-at-home measures and have heard of other sites crashing in recent weeks due to increased traffic.”
Misolas told Global Sisters Report that Australian authorities are monitoring the situation because Australia “is a demand country” that has a high number of those seeking the illegal, exploitive material from the Philippines.

The International Justice Mission says the reason the Philippines is at the epicenter of the problem is that, until recently, there had been “relative impunity for traffickers,” though that is now changing. It also said the country has a high-volume “robust money remittance infrastructure,” which has made it difficult to detect money transfers destined for traffickers.

The lockdowns throughout the world have proven challenging and difficult for children, noted Maryknoll Sister Esperanza Principio, a Philippine sister based in Lima, Peru. She told panelists that there has been an increase of cases reported to law enforcement of child abuse, both physical and sexual, since Peru’s lockdown began in March. 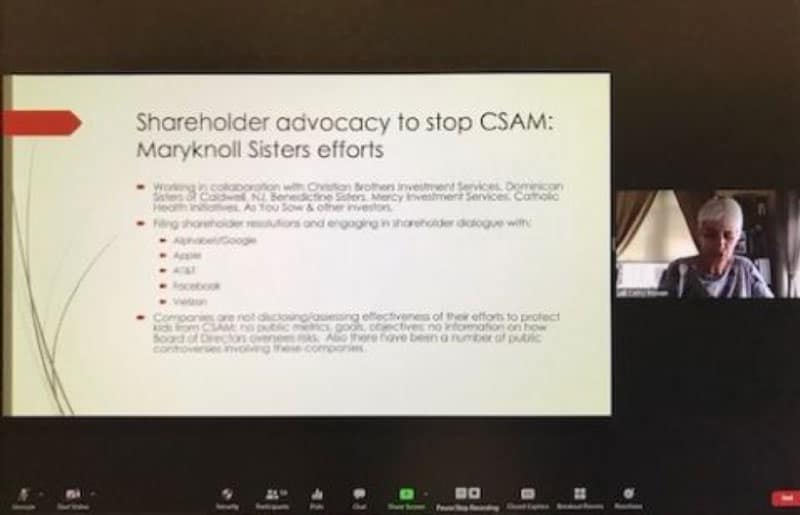 Screenshot of Cathy Rowan, an investment advocate for the Maryknoll Sisters, during the July 15 online forum (Courtesy of Marvie Misolas, Global Sisters Report)

“The fact that [both adults and children] are constantly inside their homes” has exposed children to the risk of abuse at the hands of adults, she said.

Potential courses of action include shareholders pressuring technology companies to begin to take the issue seriously, said panelist Cathy Rowan, an investment advocate for the Maryknoll Sisters. Another panelist, Jacqueline Beauchere, digital safety advocate for Microsoft, said exploitation conducted on legitimate platforms has the attention of the tech industry and that companies like hers are committed to finding a solution.

And Ambassador Kira Christianne Azucena, the deputy permanent representative of the Philippines Permanent Mission to the United Nations, noted her government’s ongoing commitment to stopping exploitation and said governments globally must play a more robust role in solving the problem.

Misolas, who is from the Philippines, offered a series of recommendations that included national governments “mainstreaming” stronger child protection laws as part of government policies as well as strengthening anti-trafficking law enforcement and court prosecution.

She also called for increased collaboration between international law enforcement agencies working in anti-trafficking and online sexual exploitation of children, as well as prosecuting “enablers and perpetrators” of such exploitation both in “source” and “demand-side” countries.

On the tech side, Misolas called for technology companies and their platforms to make protecting children a top priority. Among her suggestions would be to detect live streaming and “new and known materials” used to sexually abuse children. That would include developing “software and hardware that better protects children.”

Sister Winifred Doherty, the U.N. representative of the Congregation of Our Lady of Charity of the Good Shepherd moderated the July 15 event.

In a follow-up interview with GSR, she noted that the issue of online sexual exploitation of children touches on several of the sustainable development goals, including No. 1 (ending poverty) and No. 16, which includes a call for ending violence against children.

Doherty, known in U.N. circles for her passionate advocacy for women and children, said the work of ending sexual exploitation of children has to be seen in the wider context of ending exploitation of any kind for economic gain.

“All such exploitation is wrong,” she said.

The original article was published by Global Sisters Report.

A project of National Catholic Reporter Publishing Company, Global Sisters Report is an independent, non-profit source of news and information about Catholic sisters and the critical issues facing the people they serve.