Two Maryknoll seminarians and a Maryknoll brother in Cochabamba, Bolivia, lend a hand in a time of pandemic.

We are Maryknoll seminarians doing our overseas training program in Cochabamba, Bolivia. Our missionary training went into high gear in March as Bolivia confirmed more and more cases of the COVID-19 coronavirus and international volunteers were called by their organizations to leave the country.

Hours after interim president Jeanine Áñez declared a 14-day quarantine on March 21, the Maryknoll Fathers and Brothers in Cochabamba received a call from Sister Irene Machaca, superior of the Little Sisters of the Abandoned Elderly at Hogar San José, a home the sisters run for elderly women and men in this Bolivian city. With more than 10 of their international volunteers leaving, she said the home was in dire need of assistance during the quarantine period. The home has more than 120 residents of varying needs but only nine sisters living with and serving them. A number of the sisters are elderly themselves.

Recognizing the urgent need, the Maryknoll community asked us two seminarians along with Maryknoll Brother Ryan Thibert to go to support the sisters in their work.

Now the days continue like clockwork, beginning at around 6 a.m. when we seminarians help the men in the infirmary get out of bed. This includes giving those who can’t move easily a bath in bed and helping them get dressed and ready for breakfast. Brother Ryan has been assigned to help a more independent group of elderly men.

We join the sisters for an hour of prayer, which includes Eucharistic adoration, praying the rosary and reflecting on the readings of the day. Public Masses have been canceled.

After morning prayers, we eat a quick breakfast and then begin our duties: changing bedsheets, cleaning dormitories and bathrooms and serving lunch to the elderly men. We feed those who need assistance. Then, we begin another round of cleaning before having lunch ourselves.

While cleaning sounds like a major part of our day here, we can see it is important mission work too. For an elder care facility, cleanliness and hygiene standards impact the well-being of the residents.

After lunch the sisters have their own prayer time and we have some time to ourselves. Often, we talk about our experiences or linger with the men as they relax in the small garden.

Seminarian Charles, who is from Kenya, is amazed at how quickly one of the elderly men is picking up Swahili, his national language. Charles has made a lot of friends, who are anxious to talk to him whenever he is available. He was deeply moved by the 90-year-old man who told him, “I miss my wife. We loved each other so much and I asked her not to die and leave me alone.” Charles says, “I did not know how to console him, but I could only hear a deep voice telling me to give him time.”

“The concept of time changes when we work in this environment,” Seminarian Matthew says. “Sometimes when I sit with one of the elderly men, offering him his lunch, one spoon after another … I am invited to imagine how God is here right now, slowing down the world, telling us to be with each other.” He appreciates the opportunity for daily Eucharistic adoration, which has become a space for him to recharge for the day.

Brother Ryan says washing residents’ feet and helping them shave make him appreciate the words of Jesus: “Whatsoever you do to the least of my brothers and sisters, you do to me.” But he feels God’s presence most, he says, in the moments he spends with residents sharing stories of his own life as they share theirs. “The feeling of gratitude is mutual,” he says.

Our day ends with serving supper, helping the residents get to bed and then cleaning the different areas before we go to bed. 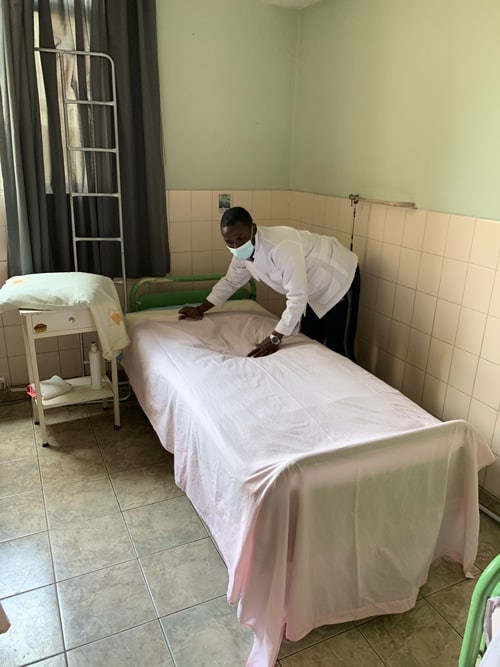 Charles Ogony, a Maryknoll seminarian from Kenya, makes a bed at a senior home run by the Little Sisters of the Abandoned Elderly in Cochabamba, Bolivia. Ogony and fellow seminarian Matthew Sim helped out at the home after volunteers were withdrawn due to the Covid-19 pandemic. (Matthew Sim/Bolivia)

We are experiencing what it means to live a vocation by watching the sisters. Even after they tell us to take a break, we notice that they continue to serve the residents in their different needs. Sister Emanuela, for example, makes sure that the men have clean clothes and sheets every day. Sometimes she has to hand-wash items because they are soiled so badly. She is small of stature, but her determination and perseverance enable her to lift men almost double her size. She is able to joke with the men and maintains a smile wherever she goes. The superior of the house, Sister Irene, is equally amazing. Despite her many responsibilities, she always makes sure to ask us how we are coping and whether we need anything.

Our time at Hogar San José has also been a time for us to reflect on what it means to be part of Maryknoll. While the whole of Bolivia is on quarantine and has been asked to practice social distancing, this has not stopped the Maryknollers in different parts of Cochabamba from being emotionally and spiritually connected. We keep in contact with the other community members and our families through WhatsApp and Facebook, and our community members have stayed in touch with us through video calls. We even celebrated a Maryknoll priest’s birthday on a video call and received a blessing from him. Care and concern for each member, we see, is integral to being a missionary community.

We especially appreciate the moments of encounter with the elderly, moments to feel the discipleship call to come and see. We are here to see and touch life itself. We see in the eyes of these men hope, love and patience. They truly appreciate our help. We often hear as we feed them: “Que Dios les pague” (May God pay you).

We do not know how long we will be at Hogar San José, as the COVID-19 virus is increasing all over the world, but one thing that we are sure of is we will be here as long as we are needed. We keep before us what Maryknoll Bishop James E. Walsh said, “To be a missioner is to go where you are needed.”

This story was updated for Maryknoll Magazine’s July/August issue.