Faith communities fear changes would all but eliminate the asylum system

WASHINGTON (CNS) — Catholic organizations and others who fear that proposed changes by the Trump administration will all but eliminate the asylum system rushed to meet a July 15 deadline to make their voices heard.

“The administration’s efforts to effectively end asylum have been met with a massive outpouring of opposition from the public, particularly the interfaith community,” said the Catholic Legal Immigration Network Inc., known as CLINIC, in a July 16 news release.

Some of proposed changes include allowing immigration judges to deny applications before the person seeking asylum can see a judge; redefining certain words and terms that some believe are aimed at getting rid of asylum for those fleeing domestic or gang violence; and making it difficult for those who travel through other countries to apply for refuge in the U.S. by saying they have had safe temporary residence elsewhere.

The proposed regulations would “essentially end asylum for those fleeing violence from intimate partners, and family members and gangs,” Bishop Mark J. Seitz of El Paso, Texas, who sits on the board of CLINIC, said in a July 5 opinion piece in The Dallas Morning News daily newspaper.

He addressed concerns with the proposed changes, which also would result in children being returned to dangerous conditions, he said, and putting migrants in detention into “petri dishes” during the COVID-19 pandemic.

Members of CLINIC, founded by the U.S. Catholic bishops in 1988 to help dioceses provide immigration services to low-income clients, have been ardent at battling, legally and in the public sphere, regulations by the Trump administration that some see as bent on excluding certain groups, particularly the poor, from entering the country.

“The administration’s attempt to end asylum in the middle of a pandemic shows their infinite cruelty,” said Anna Gallagher, CLINIC’s executive director, in the organization’s news release. “At a time when our shared humanity and need to help one another is undeniable, our country’s leaders are spending resources on a proposal to condemn even more people to suffering and death.”

“Thousands of members of the interfaith community showed up in force to oppose the proposed rule,” she continued. “They made clear they will not accept a society that locks the door on the world’s most vulnerable.” 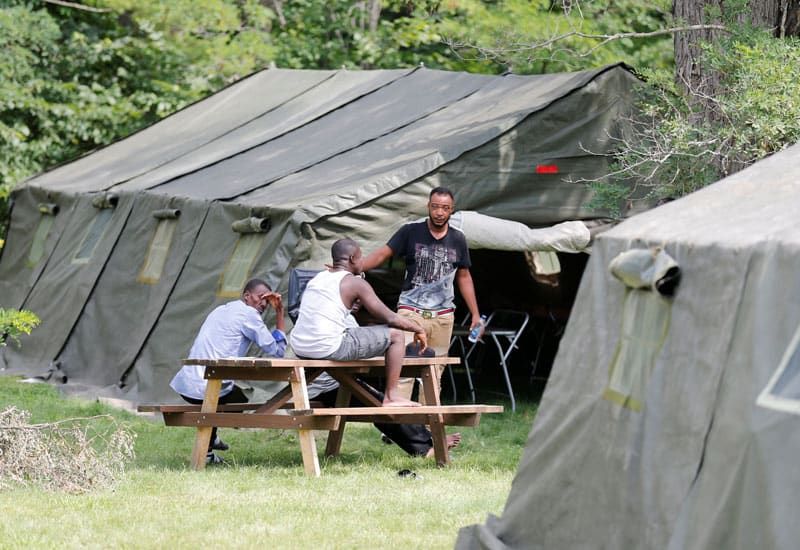 Refugees in Lacolle, Canada, sit outside one of the tents set up to house the influx of asylum- seekers near the U.S. border Aug. 10, 2017. (CNS photo/Christinne Muschi, Reuters)

The U.S. Conference of Catholic Bishops also joined the more than 79,000 public comments recorded on the proposal. The chairman of the USCCB’s Committee on Migration, Auxiliary Bishop Mario E. Dorsonville of Washington, said in a news release the changes would have devastating consequences.

Bishop Dorsonville quoted Pope Francis’ call to “keep our eyes open …, keep our hearts open” and said others should remember “the indispensable commitment to save every human life, a moral duty that unites believers and nonbelievers.”

“We cannot turn our backs on the vulnerable,” he said.

The Leadership Conference of Women Religious, whose members are the leaders of congregations of Catholic women religious in the U.S., said in a statement the rule was inconsistent with Catholic social teaching and also said it violated the law and principles of the United States of America.

LCWR said the changes signaled the “final nail in the coffin of the U.S. asylum system.”

The statement spelled out several examples of those running for their lives whom many women religious in the U.S. have encountered in their ministry.

“Our sisters minister in Central America and on both sides of the U.S. Southwestern border. They have witnessed firsthand the violence to which asylum-seekers are subject in their home countries and in Mexico where they are forced to wait for months for their chance to plead their case for asylum in the United States,” their statement said.

“Our common humanity demands that we offer protection to vulnerable children and families fleeing from Central America to our southern border,” LCWR continued. “They are seeking protection from lawlessness, violence and persecution. Many of them clearly qualify for asylum or other U.S. legal protections.

“Allowing immigration judges to summarily deny applications before the applicant even has a hearing is wrong. All those seeking asylum have a right to avail themselves of the measure of U.S. legal protections.”

The Maryknoll Office for Global Concerns said in its July 13 public comment the rule’s changes explicitly violate “our moral and religious obligations to shelter the oppressed and welcome the stranger. In addition, they fly in the face of U.S. obligations under domestic and international law.”

The organization said in its statement the new rule would “narrow those who would qualify for asylum down to nobody.”

“Our position on this proposal is rooted in our moral duty to respond with mercy and compassion to those who seek our help,” the Maryknoll Office for Global Concerns said. “The Catholic Church, through its thousands of social service agencies and ministries, stands ready, willing, and able to serve as an alternative to detention and to uphold a robust asylum system.”

It added: “We ask for the opportunity to live out our faith by supporting our brothers and sisters coming to our borders fleeing violence. We urge you to comprehend the damage this proposal will cause and to rescind this rule immediately.”

Many organizations also objected to the 30-day period allowed for public comment. The new rule was published in the Federal Register June 15, with a comment period ending July 15. In general, federal agencies will specify a comment period ranging from 30 days to 60 days, with 60 days being the usual time period but often an even longer period is allowed.

One news report said that within three days of the publication of the proposed rule, more than 500 organizations signed on to a letter requesting that the Departments of Justice and Homeland Security extend the comment period to a minimum of 60 days.

“The short comment period for such a lengthy and complex proposed regulation is proof of the administration’s intention to carry out its immoral plan as quickly as possible,” said Victoria Neilson, managing attorney of CLINIC’s Defending Vulnerable Populations Program.

“We strongly question whether they will review and consider the responses from experts, people of faith and advocates working on the ground with experience on how asylum truly must work to protect and save lives,” she added.

Featured image: Sandra Gutierrez, who fled gang violence in Honduras with her family and was granted asylum by the United States in 2016, is seen in a makeshift bedroom inside her home in Oakland, Calif., May 30, 2017. (CNS photo/Stephen Lam, Reuters)