For over a week, a flood control embankment has been the makeshift home for Mohammad Syed and his family.

“Flooding inundated our house so quickly that we had to flee with whatever possible. I don’t know what has happened to the house and our belongings,” Syed, 45, a Muslim father of three, told UCA News.

Millions of people like Syed are reeling from heavy monsoon flooding in Bangladesh, India and Nepal. Scores have been killed in the worst monsoon floods to hit the region in decades.

Officials in Bangladesh said that about 3 million people have been stranded in the north, northeast and central parts of the country.

Bangladesh is a low-lying nation located on the floodplains of the world’s largest river delta system that empties into the Bay of Bengal, making it vulnerable to natural disasters like cyclones, flooding and river erosion. Flooding is a common annual natural calamity that kills hundreds and destroys houses, crops and livelihoods of millions, making it a major cause of poverty for one-quarter of Bangladesh’s population of more than 160 million.

Syed, a farmer who relies on agriculture on two acres of land to run the family year-round, is extremely worried about how his family can survive after incurring heavy financial losses due to the monsoon flooding.

“Almost every year floods strike and we are accustomed to it. But flooding this year has been the most devastating. Besides destroying houses, it also ravaged crops and other means of livelihood for people like me,” he said.

Syed had spent about 50,000 taka (US$590), mostly borrowed from a local NGO, to plant paddy rice and vegetables in his fields in the Sariakandi area.

“Due to COVID-19, I had to spend more as prices of seeds, fertilizer and labor increased. I expected a good harvest and better prices, but now everything is under water. I am extremely worried about how to overcome crop losses and pay back my loan,” he said.

Thakur Chondro Barmon, 35, a mechanic-cum-sharecropper farmer from the Taraganj area of Rangpur district, is also in a desperate situation. The Hindu father of two has not lost his house in the flooding so far, but rice on his one acre of land has been washed away.

“Due to COVID-19, income from my garage dropped significantly. I spent 20,000 taka to plant rice in the field, which has been destroyed. I am extremely tense about the future of my family,” Barmon told UCA News.

“Our income and crops are gone. Now we are surviving on the income from my wife’s sewing work,” he added.

Moreover, illness has added to his family’s woes, with both his son and daughter suffering from fever.

“Most deaths were caused by diarrhea, and if the flooding continues, the situation will get worse. Medical teams have been dispatched to flood-affected areas. They are working hard to ensure pure drinking water for people by providing water purification tablets and medicines for various diseases,” she said. 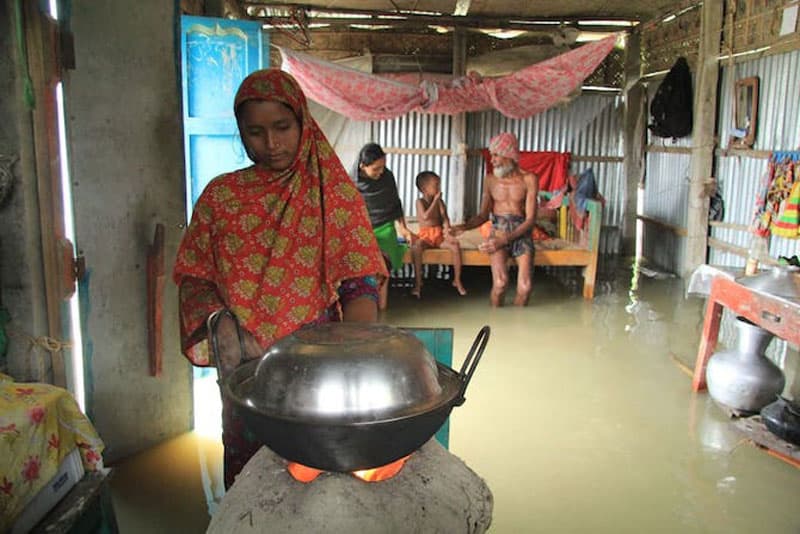 Woman cooks food inside a flood-affected house in the Nageswari area of Kurigram district on July 14. (Liton Das, UCA News)

To tackle the outbreak of waterborne diseases, the Bangladesh government has formed 578 medical teams to cover all the country, said Dr. Enamur Rahman, state minister for disaster management and relief.

“We have already allocated 8,200 metric tons of rice and cash of 28.2 million taka ($332,659) for flood victims. We will provide more aid including cooked meals, baby food and fodder for domestic animals,” Rahman told UCA News.

“We are ready for a prolonged flood and we have enough food stocks to assist those in need.”

National and international aid agencies that have already spent many funds on COVID-19 are facing a cash crunch amid the flooding.

He has visited flood-affected areas in northern Bangladesh and seen the extreme suffering of people.

“During COVID-19 people were able to stay at home and cook meals. Now their houses have been destroyed and food stocks are gone. They are passing days miserably on roads and embankments. Prolonged flooding will put their survival at stake,” Costa said.

“To tackle this crisis, all stakeholders including government and private organizations need to work together.”