CLEVELAND (CNS) — As the 75th anniversary of the atomic bombings of two Japanese cities approaches, the president of the country’s Catholic bishops’ conference called on the United States “as a Christian nation” to witness the Gospel of peace as lived by Jesus.

Archbishop Joseph Mitsuaki Takami of Nagasaki, Japan, said in a July 8 email to Catholic News Service that “Americans need to understand and practice the truth of peace that Christ teaches.”

“I have the impression that most Americans believe that arms are necessary to protect oneself, one’s families and the nation. The history, however, demonstrates how arms brought about tragedies. I want the Americans to work for peace without the possession and use of weapons,” the archbishop said.

He also reiterated his long-standing call that the time is long past for the world to abolish nuclear weapons.

Nagasaki, the hub of Catholicism in Japan, was the second city over which an atomic bomb was dropped by a U.S. warplane Aug. 9, 1945. Hiroshima suffered a similar fate three days earlier. Japan surrendered six days after the second detonation, ending World War II.

Archbishop Takami, 74, is a survivor of the bombing of Nagasaki, his hometown. He was in his mother’s womb when the bomb known as Fat Man detonated over the city, ultimately claiming between 39,000 and 80,000 lives.

Historians and analysts estimate overall that between 129,000 and 226,000 people, most of them civilians, died in the two bombings.

The archbishop has been a vocal proponent of nuclear disarmament throughout his 48 years as a priest. This year in particular he has traveled the world and to the United Nations with what remains of a wooden statue of Mary that had been in Nagasaki’s destroyed Urakami Cathedral. He shows the scorched head of Mary to demonstrate the utterly devastating effects of the blast and ensuing inferno, telling anyone who will listen how absurd war is.

The tone of his email indicated that the current state of affairs regarding nuclear weapons concerns the archbishop. He said he views the collapse of arms control treaties between the U.S. and Russia, plans by both countries to spend billions of dollars to upgrade stockpiles and efforts by other nations to acquire such weapons as troubling.

“I fully agree with Pope Francis that the world has not learned anything from the tragedy of Hiroshima and Nagasaki,” he said.

The pope, during a visit to Hiroshima and Nagasaki in November, said it was “perverse” to think the threat of nuclear weapons makes the world safer. He urged a renewed commitment to nuclear disarmament and to the international treaties developed to limit or eliminate nuclear weapons.

Archbishop Takami also lamented the disinterest shown by much of the world to the threat nuclear weapons pose.

“It’s a fact of life that people who are not involved are not interested in the question. Most of the people in the world are not involved, so it may not be surprising that they are indifferent. However, the U.S. government and the military were the perpetrators of the attack (on Japan). They were fully involved and responsible,” he said.

“Modern nuclear weapons are hundreds of times more destructive than the atomic bombs of Hiroshima and Nagasaki. Moreover, President (Donald) Trump has talked about developing new nuclear weapons that are lighter and more destructive. The Nuclear Non-Proliferation Treaty has been neutralized. The world is spending an astronomical amount of money to make the threat of nuclear weapons more real,” the archbishop said.

There is a need, he continued, to join Pope Francis “to raise our voice and make it louder. We need to make all the politicians and the people of the world understand that the existence of nuclear weapons is a problem.” 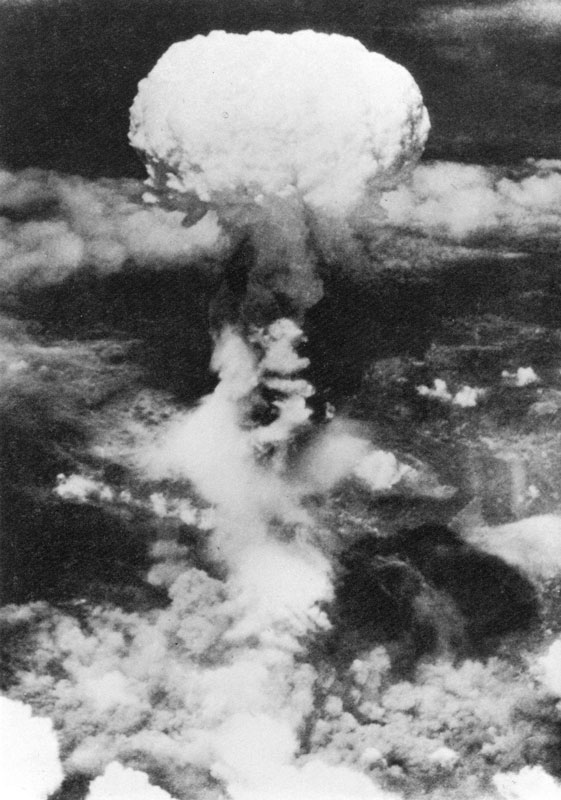 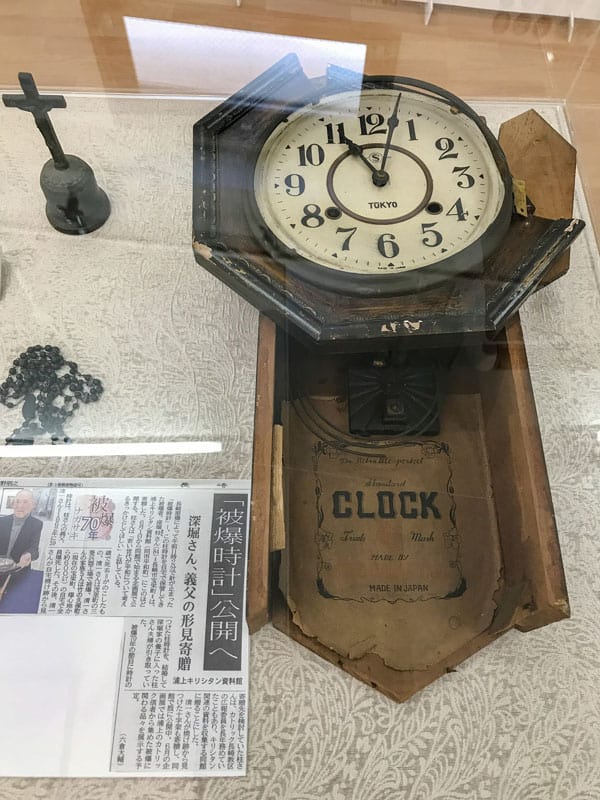 A broken clock stopped by the Aug. 9, 1945, atomic bombing of Nagasaki, Japan, as well as a burned cross and rosary are pictured at the Urakami Kirishitan Museum in Nagasaki, Japan, Aug. 29, 2017. (CNS photo/Mihoko Owada)

“Politicians are responsible for listening to our voices and denuclearizing the world,” he added. “The only thing we can do is to make a strong appeal to their conscience. In this sense, I want Christian politicians to be aware that they have a grave responsibility.”

Archbishop Takami also appealed to people of faith, and Catholics in particular, to know and understand “the peace that Christ teaches” so that they can see that a world without violence is possible.

He recalled the words of the risen Jesus, as recorded in the Gospel of John, when he greeted the apostles by giving them his peace as a sign for the world to emulate.

“Christ was victimized by human violence,” Archbishop Takami said. “He, however, overcame violence by the love that was stronger than death. The peace of Christ is brought by his love stronger than death. … We have to be convinced of the peace of Christ and continue our efforts to extend peace by working with people of the world to enable a world without nuclear weapons.”

Archbishop Takami is not alone in his call. The Japanese bishops’ conference issued a statement in advance of the bombing anniversary June 23, which is observed as Okinawa Memorial Day in part of Japan.

The bishops expressed concern about the development of a new Cold War between the U.S. and Russia, instability in East Asia, the nuclear threat and the global environmental climate. They said all are inextricably linked and pose a danger to all of humanity.

The day is a holiday in the Okinawa prefecture and is set aside to remember the lives lost during the Battle of Okinawa, the only on-the-ground fighting on Japanese soil during World War II. Resulting in an Allied victory, it was the bloodiest battle in the Pacific theater, with about 160,000 casualties on both sides during 12 weeks of warfare.

The statement also pointed to the Treaty on the Prohibition of Nuclear Weapons approved in 2017 by a majority of member states of the United Nations as key to denuclearizing the world. The Holy See became one of the first entities to ratify and sign the treaty in September 2017.

In the final vote, 122 nations approved the treaty, with Netherlands the only country to vote against it while Singapore abstained. Sixty-nine countries did not vote, including all the nuclear weapons states and all NATO members except Netherlands. 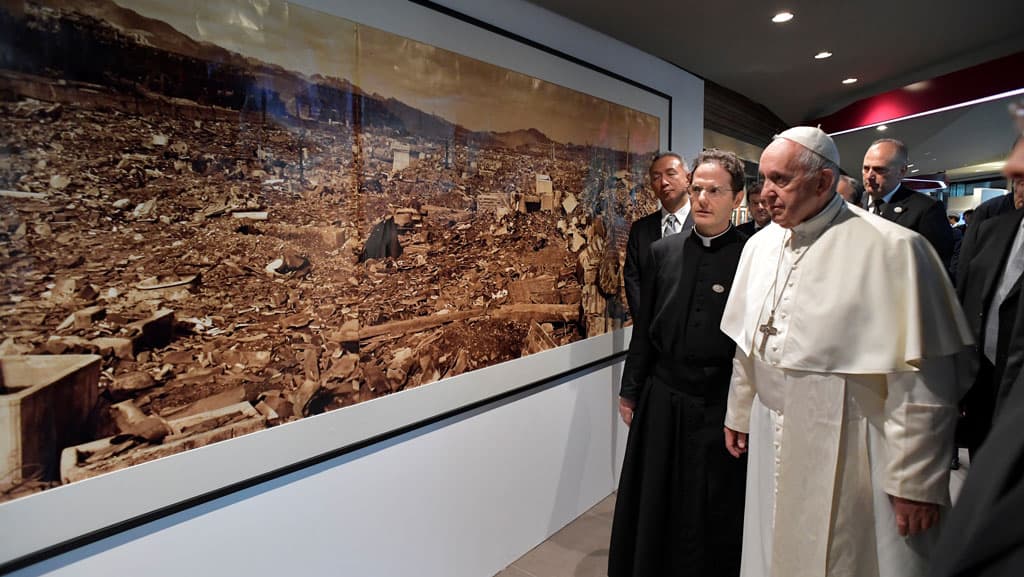 Pope Francis walks by a photo showing the destruction created by an atomic bomb during his Nov. 26, 2019, visit to the Jesuit-run Sophia University in Tokyo. (CNS photo/Vatican Media via Reuters)

While progress toward peace “remains uncertain,” the bishops said that as the 75th anniversary of the atomic bombings approached, they were renewing “our determination to face the past unflinchingly and continue to take responsibility for the future.”

Archbishop Takami also said that while the Japanese bishops have had some engagement with the U.S. Conference of Catholic Bishops on issues of peace and nuclear disarmament, “our efforts may not have been sufficient.”

He called for new commitments to introduce “sustainable peace education for all the generations, from children to adults” throughout the church.

“Peace first of all, is a question of one’s soul. However, peace is about our faith in God and interpersonal relationships of trust and forgiveness that do not discriminate and hate anybody. Peace is about the necessary conditions that guarantee life in society (health, education, security) and the environment, our common home,” he explained.

In the run-up to the August anniversaries, the Nagasaki Archdiocese has undertaken a wide range of activities to teach the importance of peace in the world. It has prepared educational materials about peacemaking to parish schools; published the stories about the statue of Mary and a crucifix that in part survived the bombing; distributed Pope Francis’ messages of peace from his visit to Japan in November; and prepared videos of talks about peace and disarmament by the archbishop and others.

In addition, a memorial Mass for peace will be celebrated at Urakami Cathedral at 11:02 a.m. Aug. 9, the exact moment of detonation over the city.