The region’s massive population, poverty, and poor health systems are perfect conditions for a humanitarian disaster

The COVID-19 pandemic might have hit South Asia a little late, but the damage has already been done.

More than three months after the ordeal began, the region’s 1.7 billion people, one-fifth of the world’s population, are passing their days and nights in fear of a grave human tragedy.

Major South Asian countries have seen a jump in daily infections from a month ago. In early May, Bangladesh was recording 400-500 infections; now it averages 2,500 a day. India has been registering about 10,000 new cases daily, up from about 2,500 in May.

Infections and deaths continue to surge in the region every day, yet India, Pakistan, Bangladesh, Sri Lanka and Nepal have eased nationwide lockdowns that somewhat managed to tame the deadly virus but failed to stop it effectively.

Current trends in most South Asian nations indicate that the easing of the restrictions and heath emergency rules are most likely to fuel the spread of the pandemic that has rocked even the richest and most developed countries in the West.

With over 434,000 confirmed cases and more than 10,200 deaths, South Asian nations are on course to overhaul the West, where better social security and health care services have failed to save many thousands from death.

Health experts fear the real numbers of infections and deaths could be much higher given that South Asian governments failed to conduct large-scale testing.

Fears are running extremely high that at the current pace of infection with the number of cases and fatalities doubling every two weeks, the pandemic is headed for a peak by the end of July.

By that time, the number of confirmed cases might reach five million and the death toll could surpass 150,000 given that population density in South Asia is among the highest in the world. 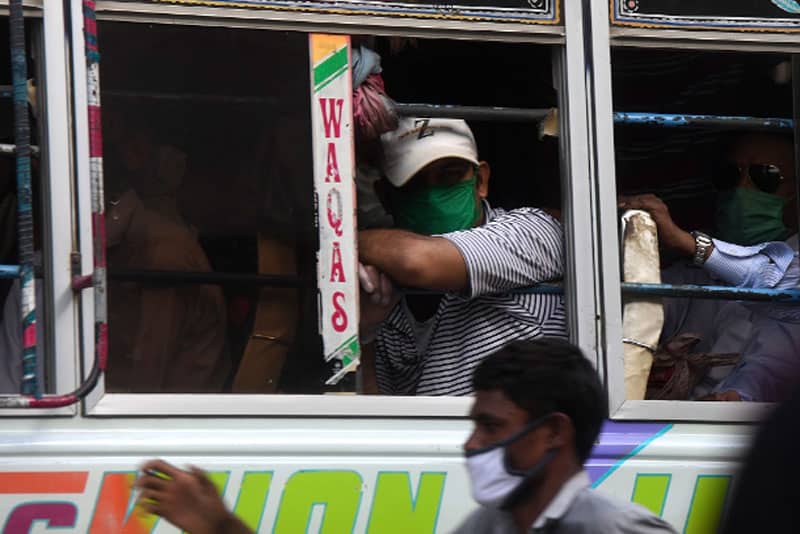 Passengers wearing face masks crowd a bus in Karachi on June 8. Pakistan has recorded more than 100,000 cases of coronavirus, health authorities said on June 8, as hospitals warned they are running out of beds to treat patients. (Photo: AFP, courtesy of UCAN)

South Asia is home to one-third of the world’s poor, who live in overcrowded and unsanitary urban slums and rural areas with extremely low nutrition levels. Not surprisingly, they have been the most affected by COVID-19.

While the rich are a minority in South Asia, they have the privilege of maintaining physical distancing and good hygiene as they live in spacious houses with sufficient rooms, doors and attached toilets. These are nothing less than luxuries for the poor.

The poor were further left out as emergency measures such as free food and free medical testing didn’t cover those most in need. Many were forced to fend for themselves, unlike the situation in the West.

Apart from poor social security and frail health care systems, a closer look at the actions of governments in India, Pakistan and Bangladesh to tackle COVID-19 will shed light on their incompetence and ill-preparedness.

Indian Prime Minister Narendra Modi gave 1.3 billion countrymen only four hours’ notice before declaring a nationwide lockdown, putting the lives of millions of poor migrant workers at grave risk. Scores died without food and in road accidents as they trekked hundreds of miles to get home.

Some 20 million Indian migrant workers from urban slums with high infection rates traveled back home, and that is how the disease spread all over the country. Bihar, one of India’s poorest states, has traced one-third of COVID-19 cases to returnees.

India has failed to flatten the curve of the virus despite having a highly applauded and effective coronavirus-slaying model in Kerala state. India has over 270,000 coronavirus cases, fifth-worst in the world.

Pakistan’s Prime Minister Imran Khan stated several times that he considered the lockdown a mistake that would hit the poor hard, yet it was enforced halfheartedly.

Bangladesh didn’t go for a nationwide lockdown except in some highly infected areas. It sounded odd when the country declared a general holiday from March 26 and it was extended until May 30.

Millions of mostly poor and low-income people took it for a holiday and left the cities for their villages on crowded public transport, raising the risk of massive community transmission. Shocked and surprised, the government declared a ban on public transport, but it was too late.

Since the pandemic struck in China and the West, Bangladesh failed to halt international flights and thus thousands of expatriate workers returned home and brought the virus with them.

Then, under pressure from businessmen, the government allowed the reopening of garment factories, forcing millions of workers to return to workplaces, which increased the risks of infection. 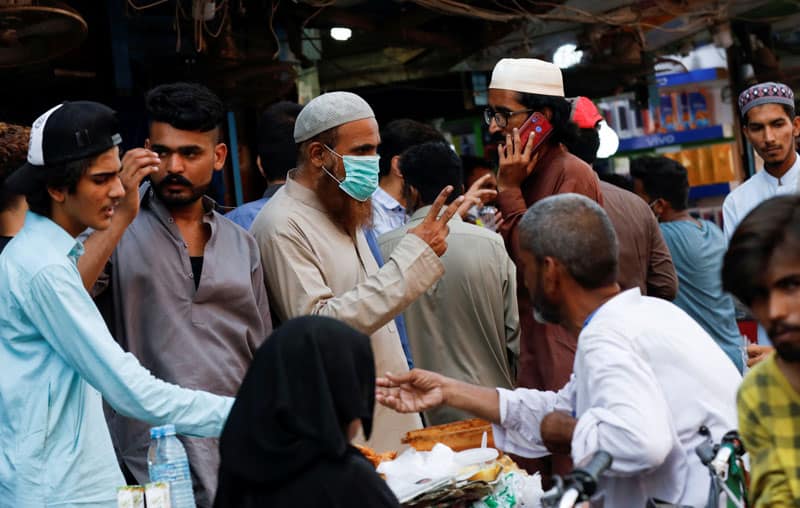 A man wearing a protective mask gestures at a crowded market in Karachi, Pakistan, June 8, 2020, during the COVID-19 pandemic. (CNS photo/Akhtar Soomro Reuters)

Sri Lanka was relatively successful with a strict lockdown and registered 1,835 cases and 11 deaths. The pandemic “impacted Sri Lanka’s economy with a fall in earnings from tourism, remittances and outflow of foreign investment,” the central bank noted.

The World Bank estimates that regional growth will fall to a range of between 1.8 and 2.8 percent in 2020, the worst economic performance in 40 years.

An economic slump in South Asia means people on the lower rungs will lose work, income and slip further into poverty, and inequality will increase sharply. The region’s rich and elites will continue to thrive when governments cut public spending on vital sectors such as health and education.

Pakistan might have salvaged its economy for some time by borrowing a huge loan from the International Monetary Fund, but proposed austerity measures are likely to choke the poor in the coming days.

Bangladesh’s vital textile industry, accounting for 85 percent of annual exports, is in dire straits — work order cancellations led to the closure of plants and the firing of thousands of workers.

More than 90 percent of the world’s COVID-19 deaths have been reported in the world’s richest nations, according to The Lancet medical journal.

Now that South Asian countries have eased COVID-19 restrictions, infections and deaths from this lethal virus are expected to leapfrog in the coming days and their decrepit health systems cannot withstand such an explosion.

Gravediggers and funeral workers in South Asia have been passing tiring days and sleepless nights already, but they are likely to be overburdened soon.

The views expressed in this article are those of the author and do not necessarily reflect the official editorial position of UCA News.