Pope Prays for an End to Violence in Libya

After the discovery of eight mass graves in Libya,
Pope Francis appeals for peace in the country’s civil war

“I urge international bodies and those who have political and military responsibilities to recommence with conviction and resolve the search for a path towards an end to the violence, leading to peace, stability and unity in the country,” Pope Francis said in his Angelus address June 14.

The United Nations announced this week the discovery of at least eight mass graves in Tarhuna, Libya, 40 miles southeast of the capital in Tripoli.

“I am following the dramatic situation in Libya with great apprehension and sorrow. It has been present in my prayer in recent days,” the pope said.

The pope’s prayer comes a day following the UN Secretary General António Guterres’ call for a “thorough and transparent investigation” to identify the victims and bring the perpetrators to justice. It remains unclear when the killings occurred, according to The New York Times.

Libya’s civil war started in 2014 after disputed elections when rebel commander Khalifa Haftar led the Libyan National Army on a military offensive against the Tripoli-based Government of National Accord led by Prime Minister Fayez al-Sarraj. 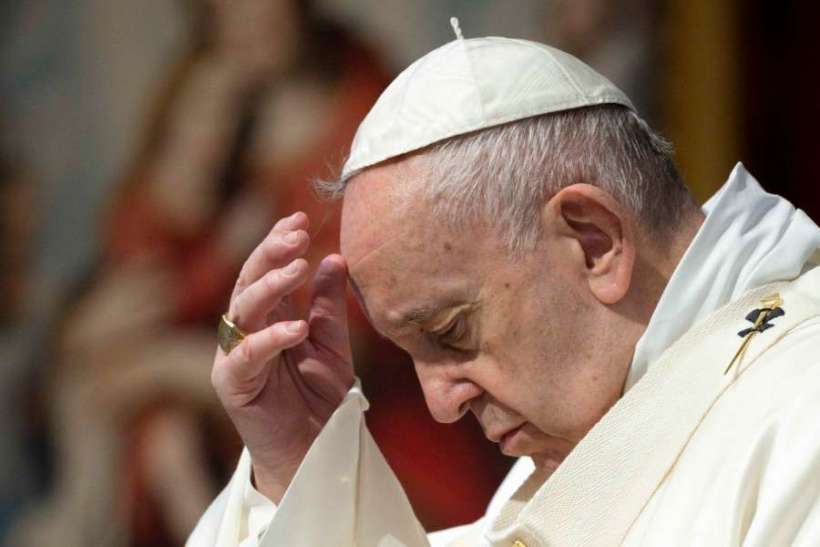 Pope Francis prays in St. Peter’s Basilica on June 14, 2020. After the prayer, the pope expressed his deep concern for the ongoing conflict in Libya. (Vatican Media/CNA.)

Libya has the largest oil reserves of any country in Africa, increasing the stakes for a number of foreign powers that have become involved in the conflict.

Haftar is backed by Russia, Egypt, Saudi Arabia and the United Arab Emirates, while al-Sarraj’s administration is supported by the United Nations, Turkey, Qatar, Italy and the United States.

The ongoing violence in Libya has led tens of thousands of people in Libya to flee their homes.

Pope Francis prayed for these internally displaced people, as well as the hundreds of thousands of migrants and asylum seekers who have traveled to Libya from neighboring African countries.

“I also pray for the thousands of migrants, refugees, asylum seekers and internally displaced persons in Libya,” he said. “The health situation has aggravated the already precarious conditions in which they find themselves, making them more vulnerable to forms of exploitation and violence. There is cruelty.”

“I call on the international community to please take their plight to heart, identifying pathways and providing means to provide them with the protection they need, a dignified condition and a hopeful future,” Pope Francis said.

“Brothers and sisters, we are all responsible for this. No one can consider him or herself dispensed from this. Let us all pray for Libya in silence,” he added.

In his Angelus address Pope Francis also offered a reflection for the Solemnity of Corpus Christi, celebrated in Italy and other countries this Sunday.

“Jesus is present in the sacrament of the Eucharist to be our nourishment, to be assimilated and to become in us that renewing force that gives once again the energy and the desire to set out again after every pause or after every fall,” he said.

Earlier on Sunday Pope Francis offered Mass and Eucharistic adoration in St. Peter’s Basilica with a limited number of people present to safeguard against the coronavirus. In his homily, he said that Christ’s presence in the Eucharist heals wounds and transforms bitter negativity into the joy of the Lord.

In his reflection before the Angelus prayer, the pope said the body and blood of Christ unites the Church to God and to each other.

“We are a community, nourished by the body and blood of Christ. Communion with the body of Christ is an effective sign of unity, of communion, of sharing,” he said.

“The Lord knows well that our human strength alone is not enough for this. On the contrary, he knows that there will always be the temptation of rivalry, envy, prejudice, division … For this reason too he left us the sacrament of his real, tangible and permanent presence, so that, remaining united to him, we may always receive the gift of fraternal love,” Pope Francis said.