Latin America has reported nearly 1 million cases
and about 50,000 deaths from COVID-19

LIMA, Peru (CNS) — Diego Ramirez, a single father in a rural village in southern Guatemala, worked in a restaurant and kept a chicken farm, selling the birds in a market to support his three daughters.

Then the coronavirus pandemic struck, and in April, Guatemalan officials ordered a lockdown in an effort to prevent the spread of the disease, which had arrived with a resident who returned home from Europe.

With the restaurant and market shuttered, Ramirez is now selling off his chickens, one by one, to keep the family afloat. Facing an uncertain future, his faith keeps him going.

“God alone knows what will happen with this pandemic,” he said. “I know it will pass—it will just take time.”

Latin America is now the epicenter of the pandemic, with Brazil leading in cases and deaths, followed by Peru. The region has reported nearly 1 million cases and some 50,000 deaths, although officials say the real figures are probably higher.

With the health crisis has come an economic crisis in a region where millions of people labor in informal jobs—as street or market vendors, taxi drivers or domestic workers—relying on each day’s income to meet that day’s needs.

With entire countries in lockdown in an effort to avoid overwhelming hospitals with COVID-19 patients, those workers saw their income vanish, followed by their scant savings.

Argentina’s lockdown, one of the toughest quarantines in the hemisphere, has lasted more than 70 days and will not be lifted until at least June 8. Church officials have backed the strict measures, despite calls from opposition politicians to restart the economy.

“We have make health the priority (because) the vulnerable feel the greatest impact,” said Father Miguel Angel Moreyra, parish vicar at the St. Cajetan shrine in Buenos Aires, where people in search of work go to pray.

The pandemic is spreading in the shanties on the outskirts of Buenos Aires, where parishes are feeding the hungry and priests have turned their churches into places where the elderly can self-isolate. 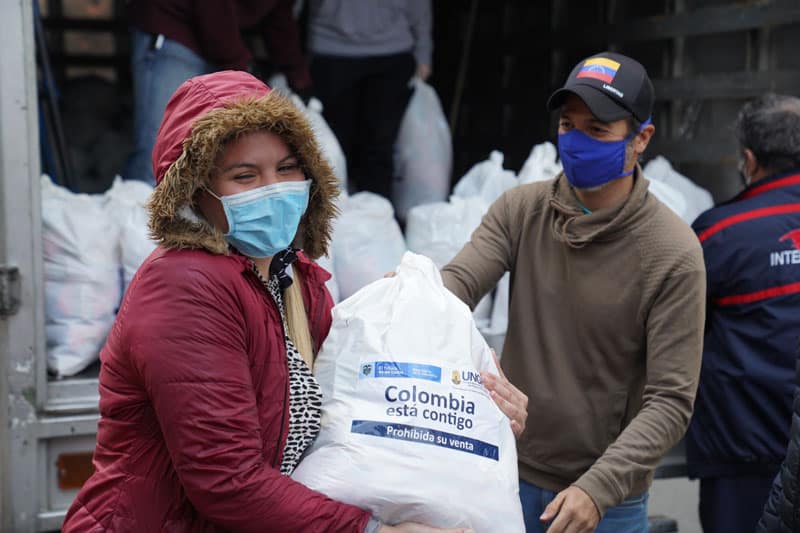 A Venezuelan migrant gets a free food package outside of Our Lady of Lourdes Church in Bogota, Colombia, May 29, 2020. (CNS photo/Manuel Rueda)

“The biggest problem we have is the lack of work and hunger,” said Bishop Eduardo Horacio Garcia of San Justo, in suburban Buenos Aires. He said his diocesan soup kitchen now serves 11,000 meals daily, an 11-fold increase from pre-pandemic levels.

Complicating matters, Argentina must renegotiate its international debt, having just defaulted for the ninth time in its history.

“When this pandemic is over, the lack of work, lack of business activity and debt are going to provoke a social and economic collapse in Argentina,” Bishop Garcia said.

Mexico planned to reopen its economy June 1, but COVID-19 cases and deaths continue to increase, and critics say the country is undercounting the lives lost. The country has recorded more than 9,000 COVID-19 deaths, according to the health secretariat, which originally predicted a death toll of about 6,000.

Government officials said they wanted to avoid hurting poor people working in the informal economy. The official response also promised “austerity” and government cuts rather than economic stimulus, leaving millions not enrolled in social programs to fend for themselves.

“If we had had a real quarantine of three weeks … this would have been controlled,” said Father Rogelio Narvaez, national director of Caritas, which has organized programs to feed the hungry and listen to people suffering psychologically.

The country now confronts a “crisis of hunger” and collapsed economy, he added. 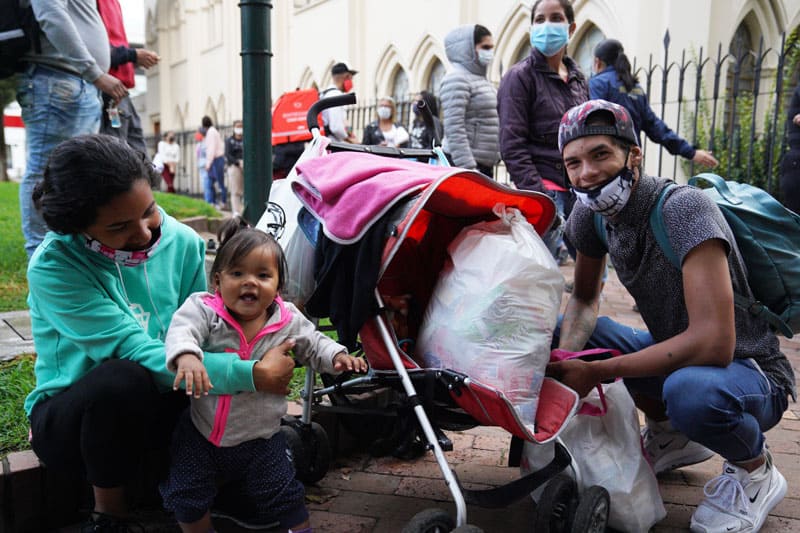 Venezuelan migrant Alejandro Romero and his partner Erica Sequera pose for a photo May 29, 2020, after receiving a free food package outside of Our Lady of Lourdes Church in Bogota. The pandemic has hit the Latin America region hard, creating an economic crisis. Migrants have been hit hard economically by Colombia’s COVID-19 lockdown as they lose their jobs and struggle to pay rent. (CNS photo/Manuel Rueda)

Colombia, with 28,000 COVID-19 cases, has so far been spared some of the problems faced by neighbors like Brazil and Peru. But social distancing and lockdowns have taken a toll, with unemployment doubling to 20 percent in April, according to government figures.

Construction sites, factories and some shops have been allowed to reopen, but many people still struggle to make a living.

With live music venues closed and no one hiring musicians for parties, mariachi singer Maximo Gonzalez and his five-member band walk residential streets in Bogota. They play in front of apartment buildings, hoping residents will throw them tips from above.

“We’re professional musicians,” Gonzalez said. “But we have no other source of income now. The only thing we can do is entertain people at their homes and rely on their collaboration.”

Others have fared worse. Venezuelan migrant Alejandro Romero peddled sweets and cigarettes on Bogota’s streets before the pandemic, but police confiscated his wares when they saw him selling during the recent lockdown. Now he roams the city’s streets with his wife and child, asking for charity.

“The toughest thing is coming up with rent money,” Romero said as he waited for a free food package outside Our Lady of Lourdes Church in Bogota. “But, thankfully, there are humble people with good hearts who have helped us out.”

In some places, neighbors have joined to face the crisis together.

In El Salvador, senior citizens fear the virus, but they also fear being an economic burden to children who have lost their income during the lockdown that began in March, said Yessenia Alfaro, 43, coordinator in that country for Unbound, a Catholic-founded nonprofit organization that works with families around the world.

Mothers who have children are volunteering to look after senior neighbors who do not have family nearby, checking on their welfare and providing food or helping them get medicines, Alfaro said. 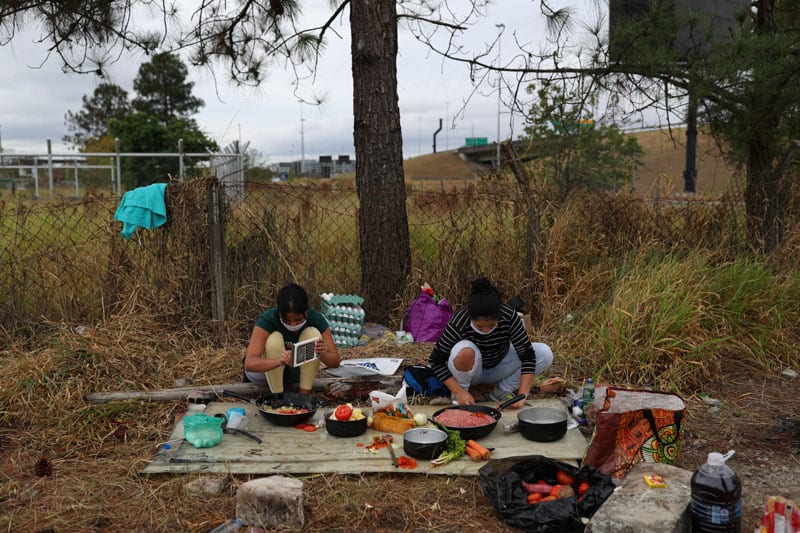 Isabella Ceballo, 19, and Yulieth Morales, 23, cook near Brazil’s Guarulhos International Airport outside Sao Paulo May 24, 2020. They were part of a group of about 200 Colombians living temporarily near the airport due to restrictions enforced during the COVID-19 pandemic. (CNS photo/Amanda Perobelli, Reuters)

Families in a low-income neighborhood on a hill overlooking Lima, Peru’s capital, have organized to stretch their budgets during the economic crunch, said Jael Lopez, 36, who coordinates Unbound’s program there.

Peruvians are allowed to leave their homes only to buy food or medicine. Because only about half of the country’s households have refrigerators, however, people in poorer neighborhoods must buy food more frequently, and crowded markets have become flashpoints for spreading the virus.

To limit exposure, some neighborhoods have chosen several people to shop for multiple families, Lopez said. Families also pool their supplies, with several people cooking food that is then delivered to the homes to keep contact minimal.

In Venezuela, malnutrition is on the rise as lockdown has left thousands of people without work. In April, 18 percent of the children weighed by a Caritas health program were severely malnourished, said Janeth Marquez, Caritas Venezuela director.

Venezuela has had relatively few coronavirus cases, because few international flights arrive and because gasoline shortages have limited people’s ability to travel within the country. But Marquez warned that that contagion could pick up as people go back to work.

That could be devastating in the country, where hospitals have been underfunded for years, are short of personnel and frequently suffer from power and water shortages.

Our Lady of Chiquinquira Parish in Caracas has been handing out packages of grains and rice to people who used to go to the parish food pantry. The church is closed to avoid contagion, but the pastor, Father Luis Salazar, broadcasts his Masses through Instagram live. That has helped him stay in touch with parishioners while other priests struggle to reach the faithful.

“We get about 2,000 people tuning in to Mass on Sundays,” said Father Salazar, who is well known in Venezuela for his Instagram videos about biblical teachings. “Doing those videos helped me a lot.”

Contributing to this story were David Agren in Mexico and Manuel Rueda in Colombia.

Featured image: Liliane Tavares de Moura, 44, a parishioner of Our Lady of Perpetual Help Catholic Church in Manaus, Brazil, delivers a protective mask to a resident in one of the city’s slums May 21, 2020, to minimize the spread of COVID-19. With the health crisis has come an economic crisis in the region of Latin America, where millions rely on each day’s income to meet that day’s needs. (CNS photo/Bruno Kelly, Reuters)