Family members and relatives burst into tears as a 45-year-old man died without admission and treatment in the corridor of Kurmitola General Hospital, a special facility for COVID-19 patients, in Bangladesh’s capital, Dhaka, on June 13.

Nipu Baidya, a Catholic from Most Holy Redeemer Church in Gopalganj district, had been suffering severe respiratory problems for the previous 10 days but failed to get admitted and treated in five hospitals.

Known to many locals as a good-hearted man, he was a diabetic and asthma patient for years and his condition had worsened since June 3.

A father of two and lab technician at a pharmacy, middle-class Baidya was denied services because he failed to show a COVID-19 certificate and didn’t have any financial or political clout.

His untimely death without treatment shocked those who knew him and sparked outrage on social media against the social divide and discrimination in Bangladesh in the time of the pandemic.

“Nipu dada [elder brother] would be alive if he had a lot of money and strong political connections. He has become a victim of our unfair social system and discriminatory health services,” Majhi told UCA News.

He expressed frustration that while rich people can charter planes and helicopters to travel to hospitals with ease and even book intensive care unit beds in hospitals, the poor and powerless are left to die.

“It is absolutely unacceptable to see a good man like him die without treatment. Without him and with no income, his wife and two children have been forced into a life of suffering,” he added.

The anger is palpable and legitimate in Bangladesh, where reports abound of the preferential admission and treatment of rich and powerful in government and private hospitals. 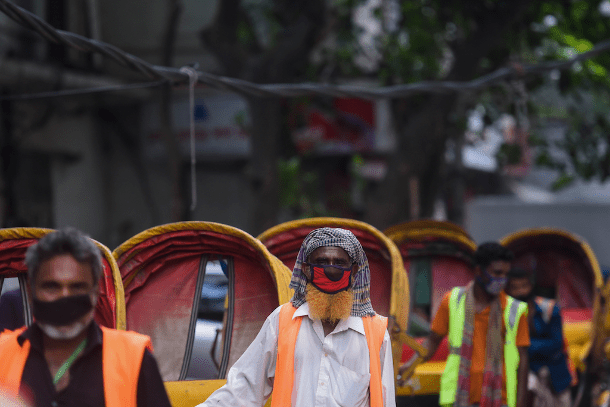 Rickshaw pullers wearing masks wait for customers in Dhaka on June 7 after Bangladesh’s government loosened its coronavirus lockdown. Poor people have difficulty in being treated for COVID-19 at hospitals. (Photo: AFP)

On June 7, Badruddin Ahmed Kamran, a ruling Awami League politician and former mayor of Sylhet city, was flown by an air-ambulance to the Combined Military Hospital in Dhaka for treatment of COVID-19.

Kamran, 69, died on June 15 but his family and relatives had no complaints as he was offered the best possible services in one of the country’s finest hospitals.

Some 100 days since recording its first three COVID-19 cases on March 8, Bangladesh is poised for a perfect coronavirus storm. Officially, it had reported 94,481 confirmed cases and 1,262 deaths as of June 16. Health experts believe the country has more cases as only 519,503 out of a population of more than 160 million had been tested as of June 15.

While most confirmed cases are from poor and middle-class groups, in many places hospitals are accused of treating patients unfairly.

In a study released June 15, the Bangladesh chapter of Berlin-based anti-graft watchdog Transparency International claimed that 23 percent of hospitals have been negligent with regard to patients who are relatively poor.

The alleged irregularities included refusing treatment to patients with COVID-19 symptoms, not attending to patients physically, leaving food for patients at doors, not cleaning wards of patients properly, dilly-dallying in testing samples, keeping male and female patients in the same ward and hesitating to remove dead bodies of COVID-19 patients.

Apart from social discrimination, a lack of resources and manpower as well as poor governance and monitoring are behind the current scenario in health services, according to Dr. Benedict Alo D’Rozario, president of Caritas Asia, the regional body of the Catholic charity.

“It is obvious that rich and influential people will avail services where there is a serious lack of resources. For the same reason, even rich people are unable to get services and are dying,” D’Rozario told UCA News.

He also slammed the recent government decision to stop COVID-19 aid for poor people as discriminatory.

“Poor migrant workers who failed to return to cities are suffering from loss of work and income, yet the government decided to cut much-needed aid for them,” he added. 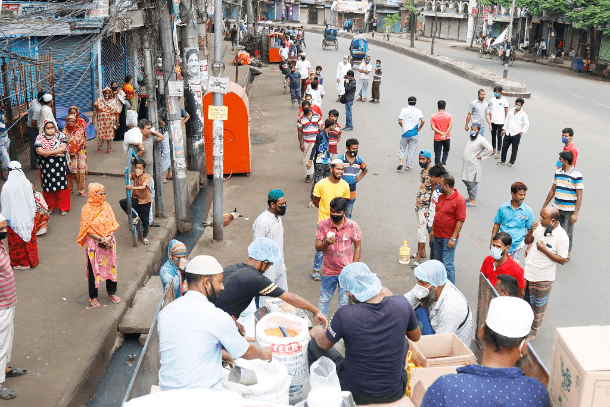 Moreover, there have been a series of reports in media over discriminatory behavior by families, relatives and communities toward COVID-19 patients and the dead.

On April 14, police rescued a 50-year-old woman who had been dumped in a forest in Tangail district by her husband and children after she developed COVID-19 symptoms.

On May 7, a villager from Jamalpur died from COVID-19 and no villagers came to dig a grave and bury him. He was buried with the help of a voluntary organization.

In May, a man died without food and treatment after his wife and children locked him inside a room after he developed some signs of COVID-19.

The same month, villagers in Sirajganj district blocked the funeral of a government officer, forcing his wife to take the body to her paternal village to perform his last rites.

Such social divides and discrimination have existed for years and are only emerging in extreme forms during the pandemic, says Abdul Jabbar, a professor of sociology at Khulna University in southern Bangladesh.

“Our social system has been always controlled by the rich and the powerful, and COVID-19 has exposed this social divide and discrimination even more. If this continues, an anarchic system will develop and it will seriously harm whatever social bonding we have so far,” Jabbar told UCA News.

“We are saddened and aggrieved that social discrimination has reached extreme levels during the pandemic. People are denied treatment at hospitals and families and communities are abandoning members to die. This is unacceptable in a civilized world,” Father Gomes told UCA News.

During the pandemic, the Catholic Church and charities like Caritas have lent a helping hand to thousands of people irrespective of creed, caste or ethnicity, the priest said.

“Whatever capacity we have, we must put humanity first and cast aside all forms of discrimination, especially when people are in distress,” the priest added.

Featured Image: A garment worker takes her lunch inside a tin shanty in Dhaka. Millions of people in Bangladesh are expected to slip into poverty due to the COVID-19 pandemic. (Photo: Stephan Uttom/UCA News)