In a region of Sao Paulo city where violent deaths are common and fatalities due to COVID-19 do not shock the population, Brazil’s Catholic Church has launched a campaign to try to convince those not providing essential services to maintain social distancing and remain at home.

The campaign, “Quero te ver de novo” (I Want to See You Again) in Brasilandia, one of Sao Paulo city’s poorest regions, seeks to disseminate the importance of social distancing in protecting the population from being contaminated with the coronavirus. Church officials, however, admit that the task is not an easy one.

“In this region social distancing is complicated, almost impossible. The houses are small and there are many family members living in each of them. Significant social distancing has not been practiced here,” said Sao Paulo Auxiliary Bishop Devair Araujo da Fonseca, who is in charge of the Brasilandia episcopal region of the archdiocese.

The church’s campaign also tries to dispel the popular notion that “one more or one less death won’t make a difference.”

“This is a population that has lived many years with extreme violence, high unemployment and lack of basic infrastructure. We needed a campaign that would say to them: Hold on, take care of yourself and others, because we want to see you alive and well (when the pandemic is over),” Jorge Vicente Barros Ferreira, one of the coordinators of the communications department at the Archdiocese of Sao Paulo, told Catholic News Service.

Located in the northern part of the city, Brasilandia is one of the most populous neighborhoods in Sao Paulo, with more than 260,000 inhabitants. The area, largely made up of slums and low-income tenements, has 36 parishes and 237 Catholic communities.

Since the first cases of COVID-19, the region has continually registered the highest numbers of cases and deaths caused by the virus in Sao Paulo city, the epicenter of the pandemic in Brazil. According to official data, until June 5 the borough had registered 247 deaths and thousands of confirmed cases. 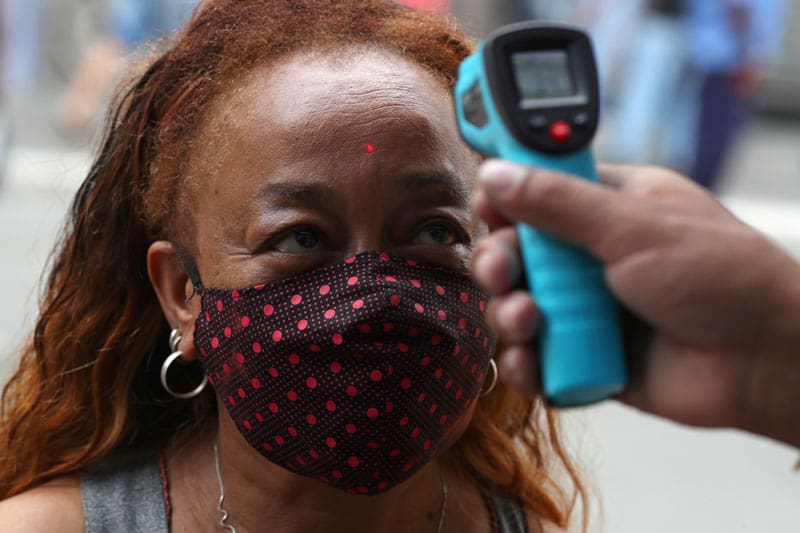 An employee checks the temperature of a woman before she enters a shop in Sao Paulo June 10, 2020, during the COVID-19 pandemic. (CNS photo/Amanda Perobelli, Reuters)

One of those deaths was the uncle of 69-year-old Rosa Maria da Costa Oliveira, a parishioner at St. Luiz Gonzaga in Brasilandia.

“The hospitals here were overflowing with patients. They didn’t have a bed for him here, so they moved him across the city, where he eventually died,” said the 69-year-old grandmother.

The death of the family member made Oliveira even angrier at those who disregard the rules of wearing masks and social distancing. From her apartment on the ninth floor, Oliveira said she sees mothers with young children and elderly walking along the streets on a daily basis without any concern for protecting themselves or others.

“I have gotten into heated arguments with friends over the order to stay home,” said the retiree, chuckling. She said she had left her apartment once in 86 days — to get her annual flu shot.

So, when the church began its campaign in May, Oliveira said she was one of the first to support it.

“I changed the cover photo on my Facebook page to the campaign’s motto on the very first day,” she said, adding that most of her fellow parishioners followed suit.

“I think it (campaign) captures what we all desire: to return to the face-to-face celebrations … The campaign asks us not to put ourselves at risk or to put anyone else at risk,” she said.

In addition to the social distancing awareness campaign, the church has also been busy in distributing hygiene and protection supplies as well as clothes to people in need. According to Bishop Fonseca, if there is a positive side to the pandemic, it is that people have shown themselves to be very generous.

“I was very surprised with the actions by some parishes and parishioners. Every tragedy is an opportunity to bring to the surface the best in people,” said Bishop Fonseca, who has been working in the region for the past five years. 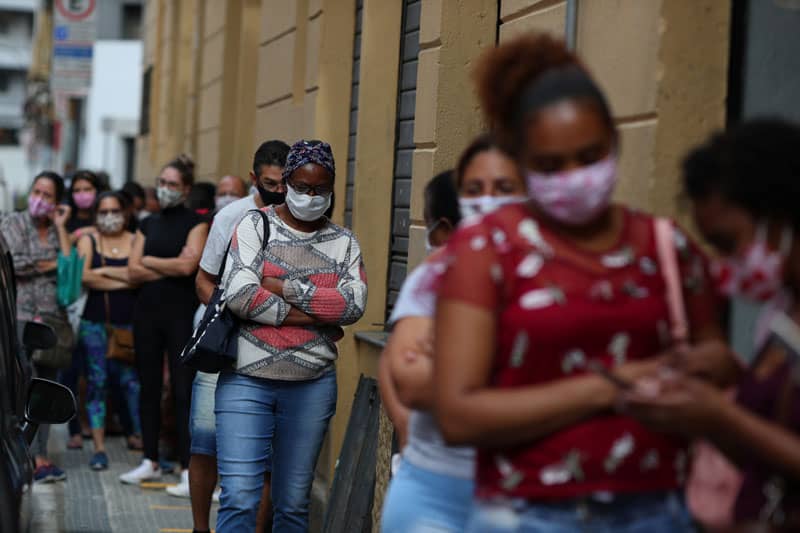 People wait in line to enter a shop in Sao Paulo June 10, 2020, during the COVID-19 pandemic. (CNS photo/Amanda Perobelli, Reuters)

“What was supposed to be a small project turned out to be a big mission for these women. They have produced approximately 30,000 masks,” he said.

“Our parishioners have not lost faith, they have found a reason to nourish hope. Faith does not make us lethargic,” said Bishop Fonseca.

He said although celebrations have been restricted to virtual events, the church is not closed.

“The doors of the parishes may be shut, but their work has not stopped. Church continues to take action,” he said.

He added that the campaign to keep people home will also help lead them back to church when the pandemic is finally over.

“The motto ‘We Want to See You Again’ means we want you to stay home now so you can be alive in the future, and it also means that when restriction measures start to ease, we want to see you in live celebrations and Masses,” he said, explaining there is concern that when churches finally open, parishioners will be too afraid to go back to attending Mass.

Oliveira, however, believes this fear is unfounded.

“When this is all over, I think our parishes will emerge better and stronger. We will give more value to face-to-face Masses, we will be more convinced of our faith,” she said.