SAO PAULO (CNS) — The Hutukara Yanomami Association and Brazil’s National Council for Human Rights petitioned the Organization of American States to issue a restraining order for the Brazilian government, so illegal miners and gold miners withdraw from indigenous land.

The entities said the invasion of miners is increasing the possibility of spreading COVID-19 among Yanomami communities.

“Without the Brazilian government taking effective measures to remove workers from illegal mining, it is a matter of time before the disease spreads throughout all regions of the Yanomami Indigenous Land,” said the document delivered to the OAS’ Inter-American Commission on Human Rights.

The surge of deaths of indigenous in the Amazon region due to COVID-19 may lead to the decimation of entire communities, say those fighting for indigenous rights.

“It will be a cultural as well as a physical genocide,” said Holy Cross Sister Michael Mary Nolan, an American who works as a lawyer for the Brazilian bishops’ Indigenous Missionary Council. 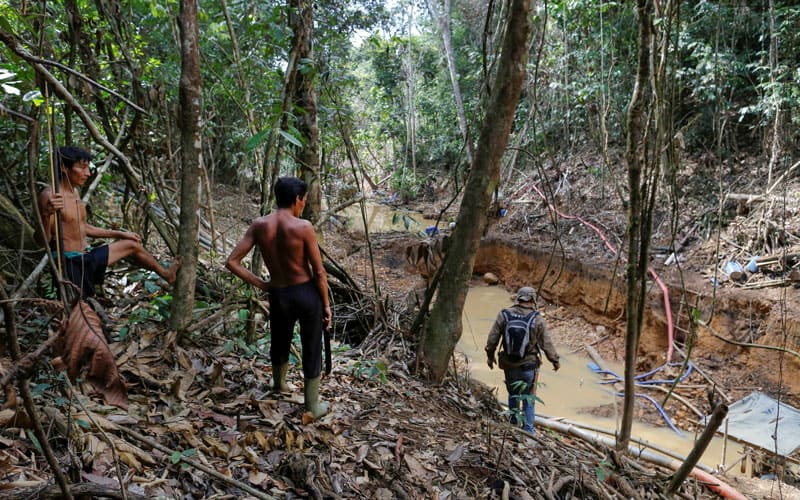 Yanomami are seen in a file photo following members of Brazil’s environmental agency during an operation against illegal gold mining on indigenous land in the heart of the Amazon rainforest. (CNS photo/Bruno Kelly, Reuters)

“The older members of the communities keep alive the traditions. With no written history, these traditions and stories will disappear with the death of these elders,” said Sister Nolan.

She said another concern noted in the petition is the apparent inattention by Brazilian authorities to the extremely important burial rituals conducted by these communities for their dead.

“The very first indigenous to die in Brazil was a 15-year-old Yanomami boy (April 9). But the family was never notified of the death and has yet to discover where the boy was laid to rest so they can give him a proper indigenous burial,” said Sister Nolan.

She said the missionary council has been in touch with officials to find out where the boy and other indigenous who died in area hospitals are buried so that when the pandemic eases, and it is safe, the community can rebury them.

During a mid-June videoconference to finalize the petition sent to the OAS, Dario Vitorio Kopenawa Yanomami said: “We have suffered a lot from the invasion of gold mining since the 1970s and 1980s. The miners killed us as if we were animals. They continue to contaminate our rivers with mercury, opening holes in our land, killing our animals and our environment.”

He said there are about 26,000 Yanomami in Brazil and another 14,000 in Venezuela, and approximately 20,000 gold miners on the Yanomami land.

Featured image: A file photo shows a Yanomami standing near an illegal gold mine on indigenous land in the heart of Brazil’s Amazon rainforest. (CNS photo/Bruno KellIn, Reuters)