Few places in the U.S. have been more vulnerable to the wrath of the coronavirus than the sovereign tribal territories of the country’s first dwellers.

Long before COVID-19 came into being, lack of running water and few places to buy groceries within American Indian tribal lands already made daily life difficult for those living on reservations, colonies and other tribal territories. Some say those conditions, in the midst of a pandemic, now have led to the highest per capita rates of COVID-19 within the continental U.S.

In recent days, Navajo Nation president Jonathan Nez has been calling attention to the more than 4,000 cases in the largest area of tribal territory in the United States, citing 2,304 cases of the virus per 100,000 people, compared to New York, considered the U.S. epicenter, and its rate of 1,806 cases per 100,000. Navajo Nation’s death toll, as of May 22, neared 150.

The situation in places such as Navajo Nation became so dire in mid-May that the humanitarian organization Doctors Without Borders sent a team in to help the community, known as the Dine, within New Mexico — the first time it has done so within the United States.

“There are many situations in which we do not intervene in the United States, but this has a particular risk profile,” Jean Stowell, head of the U.S. COVID-19 response team for Doctors Without Borders, told CBS News in mid-May.

Though $8 billion was allocated to American Indian communities in the CARES Act Congress passed March 27, the money did not arrive until late April, making it difficult in the meantime to provide conditions that would have brought running water and food to those living within the territories. By the time some of the money arrived, many had contracted the virus.

Conditions such as a higher than average rate of diabetes among American Indians, a chronic condition that becomes even more dangerous for those who acquire the virus, lack of running water to put into place the handwashing precaution to prevent the spread of the virus, plus the added challenge of having to travel long distances to buy food and coming into contact with communities where the virus was running rampant, set up a steep hill for many tribal communities.

By May 22, the Indian Health System had confirmed more than 6,500 cases of COVID-19 and confirmed 184 deaths at its facilities.

Concerned about the alarming situation, on May 13, three U.S. bishops issued a joint statement, saying they were “heartbroken” that indigenous people in the United States “continue to greatly suffer from the COVID-19 epidemic” and at “disproportionately high rates” compared to other U.S. communities.

Nationally, the Catholic Church, through organizations such as the Chicago-based Catholic Extension, which works in the nation’s mission dioceses in the poorest regions of the United States, has funded the salaries of church members as well as of facilities such as schools that have served places such as Navajo Nation. The U.S. bishops support these regions of the country through their annual Catholic Home Missions Appeal.

A May 15 report on Catholic Extension’s website says the organization supports 15 parishes and missions “spread across the vast Navajo Nation,” in “a population that has many challenges even in ‘good times.'” 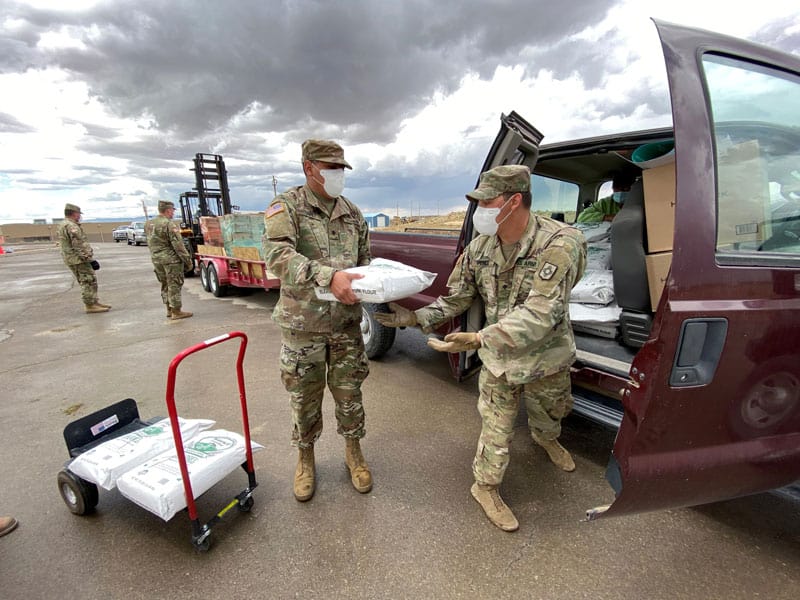 Members of the New Mexico Army National Guard in Standing Rock, N.M., put bags of flour into a truck as they assist with food distribution throughout the Navajo reservation May 11, 2020, amid the coronavirus pandemic. (CNS photo/Donovan Quintero, Reuters)

Even before the pandemic, a third of the population had no access to running water, the organization said, making it difficult to comply with the handwashing recommendation as a means to prevent the virus. Though with limited resources in the region, Catholic parishes have kept facilities open to the public during certain hours, so that people can access potable water and take it home during the pandemic, the organization said.

A group of women religious, the Daughters of Charity in Tuba City, Arizona, also supported by Catholic Extension for 20 years in the area, have been involved in food distribution to the hungry, and funding the electricity bills of the poor, Catholic Extension said.

The St. Anthony Indian School in Zuni, New Mexico, has been providing study packages for students that each week are distributed and returned via a drive-through system since many pupils lack access to the internet at home. Some access lessons by teleconferencing with students listening via a telephone system, which also is used to broadcast Masses.

And even at the parish level, some like Father Tai Nguyen, pastor of Our Lady of Perpetual Help Parish in Kearns, Utah, began sewing masks in early April to send to Navajo Nation.

The unfolding situation also called the attention of celebrity chef Jose Andres, who mobilized his charity World Central Kitchen’s Relief Team to go to New Mexico to make food packages for hungry families as well as those affected by COVID-19.

“We are especially mindful of the Navajo Nation where people are being infected with the coronavirus at some of the highest rates in the country,” said the statement signed by Bishop Shelton J. Fabre of Houma-Thibodaux, Louisiana, chairman of the U.S. Conference of Catholic Bishops’ Ad Hoc Committee Against Racism; Archbishop Paul S. Coakley of Oklahoma City, chairman of the USCCB’s Domestic Justice and Human Development; and Bishop James S. Wall of Gallup, New Mexico, chairman of the USCCB’s Subcommittee on Native American Affairs.

“We hold in prayer our brothers and sisters who are suffering and grieving in these communities, and we stand with them in calling for a robust response to the pandemic in their lands,” they said, adding that the current pandemic “is exacerbating health disparities and long-standing social inequalities facing native and indigenous communities.”

The bishops said that “adequate funding” has “long been a challenge” for the Indian Health Service, or IHS, a federal agency within the U.S. Department of Health and Human Services and the prelates pointed to reports that IHS has “shortages of medical personnel and hospital beds.” The agency provides comprehensive health care services to nearly 2 million Native Americans and native peoples in Alaska.

Though dealing with the virus, tribal communities also are fighting battles with state governments and federal agencies to keep others from entering their lands and exacerbating the situation. 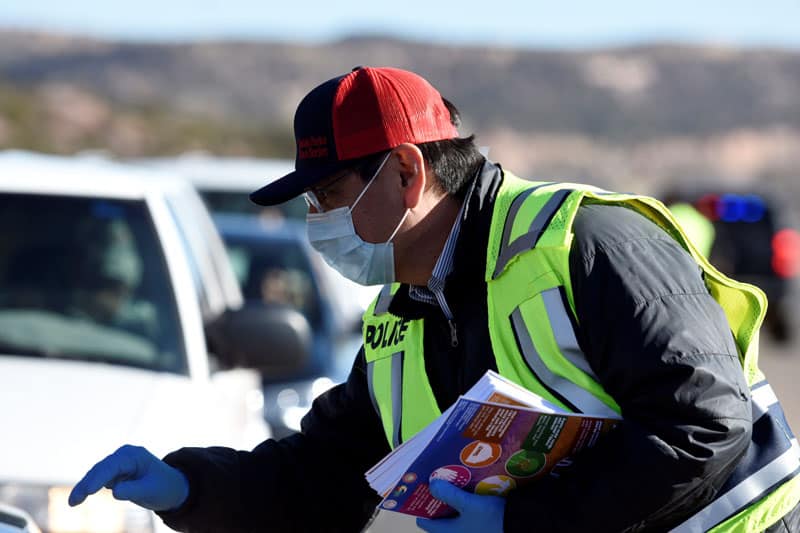 Jonathan Nez, Navajo Nation president, distributes educational material March 24, 2020, to drivers in Window Rock, Ariz., on how to prevent the spread of COVID-19, the disease caused by the coronavirus. (CNS photo/Donovan Quintero, Reuters)

In South Dakota, to prevent their weak health care systems from collapsing, the Cheyenne River Sioux Tribe and the Oglala Sioux Tribe set up checkpoints along federal and state highways that run through tribal lands, saying that they’re needed to prevent unnecessary visitors into tribal lands during the pandemic. But the South Dakota governor has asked the White House to step in and lift the checkpoints.

Harold Nez Frazier, chairman for Cheyenne River Sioux Tribe, in various interviews with media has said the tribe has to take such measures because it’s a vulnerable population, with members dealing with obesity and diabetes, as well a bare-bones health care facility. For similar reasons, tribal governments in Arizona and New Mexico, also have set up checkpoints.

“The nearest health facility is a three-hour drive (to) Rapid City, South Dakota, for critical care. And our health facility is basically just — we only have eight beds. There’s only one respiratory therapist,” he said in a May 10 interview with National Public Radio. “You know, there’s probably about over 10,000 residents here that live on the reservation. So, if we were to have a massive outbreak, you know, where are they going to go?”

The fear of overwhelming a facility is an all too-real situation in the rural settings that surround tribal lands.

On May 19, The Associated Press reported such a case near Navajo Nation in New Mexico, where a small rural hospital became overwhelmed after a series of events led to the transfer of 22 patients to their center. The patients then had to be transferred once again to another facility because the hospital didn’t have enough staff to deal with the outbreak.

Featured Image: Cars in Coyote Canyon, N.M., on the Navajo reservation, line up to receive food at a food distribution point before the start of a weekend-long curfew May 15, 2020, during the coronavirus pandemic. (CNS photo/David Wallace, The Republic, USA TODAY NETWORK via Reuters)