Argentine Priest Takes Permanent Oath as a Member of Maryknoll

Father Alejandro Marina, born in Buenos Aires, Argentina, took his permanent oath as a Maryknoll missionary priest on May 25, 2020. He is the first foreign-born priest to incardinate into the Maryknoll Society.

Father Marina was ordained in 1993 for the Diocese of San Isidro, Argentina. As diocesan director of missions, he was sent to serve as a missioner in Holguín, Cuba, for four years. That, he says, is where his call to mission strengthened. He has a degree in dogmatic theology and has specialized in the area of missiology.

With the approval of the bishop of San Isidro, Father Marina joined the Maryknoll Fathers and Brothers as a priest associate in 2012 and was assigned to work at the Maryknoll Missionary Center for Latin America, based in Cochabamba, Bolivia. His leadership skills led to his becoming director of that mission center from 2016 to 2019. He also taught anthropology at the Bolivian Catholic University. 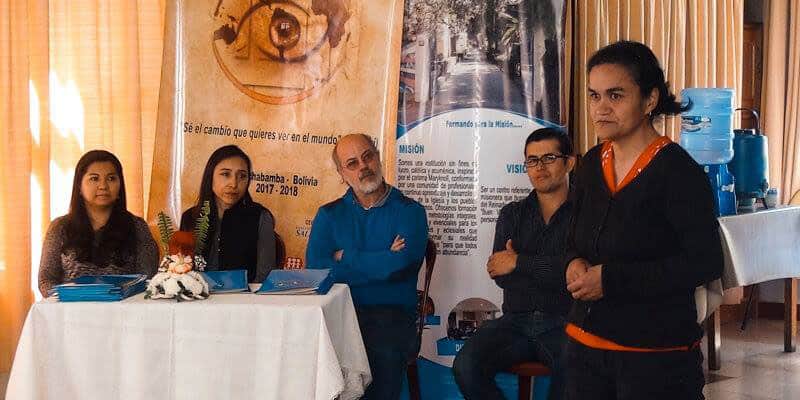 Maryknoll Father Alejandro Marina (in blue) during an event organized by the Maryknoll Missionary Center for Latin America (CMMAL). Marina was director of the missionary center from 2016 to 2019. (Courtesy of CMMAL/Bolivia)

“As you know, since 2012, I started an experience with the Maryknoll Fathers and Brothers in Cochabamba, Bolivia. After a few years … I made the request for incardination in the missionary society of the Maryknoll Fathers and Brothers,” wrote Father Marina on his Facebook page, inviting his family and friends to attend, online, the ceremony where he took his permanent oath.

Observing the social distancing restrictions during the COVID-19 pandemic, Maryknoll Father Russell Feldemeier celebrated the ceremony behind closed doors at the Maryknoll House in Chicago, Ill.