The counter-offensive in the successful battle against COVID-19 in Asia came in the form of digital technologies and large-scale testing, especially in countries such as Singapore, Taiwan and South Korea.

But one country struggled despite being commonly perceived as high-tech: Japan. A lack of valid equipment for reliable examinations, and a slow response in putting in place suitable techniques for tracing high-risk cases, were the primary causes. Yet the Land of the Rising Sun could count on an equally effective advantage: the ability of citizens to regulate themselves.

After the declaration of a state of emergency in early April, the Japanese were asked to gaishutsu jishuku, that is, to self-restrain. Through the loudspeakers in all the neighborhoods of Tokyo, a flat-note voice — identical to the one that warns of a natural disaster such as a tsunami — reminded the population every day to be patient and to make an effort not to go out. How did the 14 million inhabitants of the capital react?

In Shinjuku Station alone, normally congested by an average of over 3.5 million train passengers per day, the reduction in traffic reached peaks of 80 percent. During the Golden Week five-day holiday, many Japanese spontaneously decided to cancel their reservations, renouncing deposits and non-refundable airline tickets.

But one thing needs to be stressed. No enforcement had been imposed on citizens not to leave their houses, nor were they prevented from using public transport. No one had been threatened with high fines or with arrests as was happening in the People’s Republic of China, which jailed those who didn’t comply with the lockdown and installed cameras in front of the homes of those who were being quarantined there.

In short, the Japanese had deployed collective self-discipline to combat the spread of the virus that was just as effective as methods being used elsewhere. Of course, this cooperation did not spring from a vacuum. It is the result of a constant educational input that starts in schools. It is there that the Japanese learn that peaceful coexistence is also based on the renunciation of self-interest for the benefit of the public good. 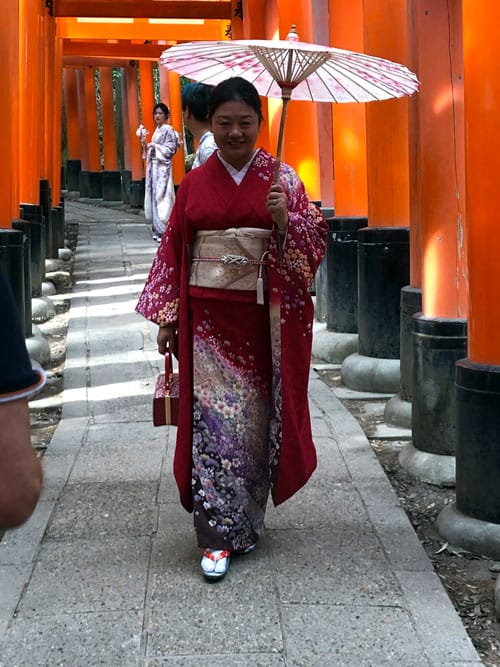 In 2019, before COVID-19 hit Japan, a Japanese woman stands outside the vermilion gates of Fushimi Inari-Taisha shrine in Kyoto. (Peter Saunders/Japan)

For example, one of the peculiarities of the Japanese education system is the obligation to clean schools, a task shared by all. It is not only a duty of the students but also of the teachers. Three times a year all students try their hand at chiiki seiso (neighborhood cleaning). It is an effective initiative to instill in young minds the concept that the waste left on the streets affects the common good for which everyone is responsible.

In many schools two or more students are selected to take care of the fuuki in, a sort of disciplinary committee. They have the task of checking that classmates respect some fundamental rules to maintain general decorum. They ensure that uniforms are properly worn, that no students slouch in the corridor, that no one is wearing bracelets or necklaces.

This may appear oppressive at first and yet here it is reduced to something very simple. It is called shakai fuuki (social discipline). We may like it or not but it is the answer to all those foreign tourists who, when they set foot in Japan, rub their eyes and wonder how it is possible to keep immaculate public stations and toilets, a reliable railway system (it also depends strongly on the cooperation of passengers) and in general a country with a negligible level of crime.

If it is true that Western culture is inclined to take for granted the full freedom of the individual without egalitarian hypocrisies, we realize, especially at this historical juncture, that to bring an entire population of individualists back to discipline, there is the need for rules that call into question those same principles we cared so much about in the first place: restrictions on personal freedom of movement, rigorous respect for social distancing in public places, and an obligation for everyone to wear masks.

The citizens of Japan, who during their formative years had already internalized the value of the collective effort for the common good, managed the quarantine by themselves without the slightest enforcement.

The first thought that pops into the head of the average Japanese is not so much “I’m worried about getting infected” but more like “I can’t put others in danger.” That’s why the Japanese didn’t rush to hospitals to safeguard themselves by getting an early coronavirus test, a practice that created lethal clusters in countries like Italy. Instead they patiently waited at home even before being formally instructed to do so.

As a result, Japan’s state of emergency was terminated on May 25, a week prior to the scheduled end date of May 31. The Japanese had accomplished by a simple act of free will and harmonious ethical choices what almost everywhere else had to achieve by strict implementation of necessary but freedom-suppressing rules. Sure, Japan’s constitution doesn’t permit the enforcement of a lockdown like in other countries, but during the whole state of emergency there wasn’t a single time that authorities regretted their lack of coercive power.

We are well aware of the decades-old criticism of the Japanese system that it tends to squash the most brilliant personalities who can’t express themselves in full due to the pressure of the group-based mentality. That is only true up to a point: look at the thousands of manga artists who lead non-conformist lives.

The Japanese can, however, sing to victory, not only when we discover that in their metropolises there is not the slightest graffiti to mark the urban decay but also in times of emergency when everyone is called to sacrifice himself for the good of the many. No one is saved alone. The Japanese knew it all along.

Featured Image: This photo of visitors at Asakusa Kannon Temple, a Buddhist temple in Tokyo, was taken in 2019 before the COVID-19 pandemic in Japan. (Peter Saunders/Japan)