Church groups join the relief effort after the most powerful cyclone in 20 years destroyed homes, livestock and crops

Catholic volunteers are providing food and shelter to hundreds of people in coastal eastern India, where Cyclone Amphan hit on May 20, killing 80 people and destroying thousands of homes.

Indian Prime Minister Narendra Modi plans to travel to West Bengal and Odisha to take stock of the situation.

The most powerful cyclone to hit Bangladesh and eastern India in more than 20 years tore down homes, carried cars down flooded streets and inundated farmland. Reports said it was the first such cyclone that Kolkata city had faced in about 300 years.

Archbishop Thomas D’Souza, based in the capital city of West Bengal state, has asked all parish priests and other officials to open all their facilities to homeless people, seek ways to feed them, and offer assistance to those in need.

Although Odisha state frequently witnesses cyclones and the last superstorm hit it in 1999, West Bengal and its capital Kolkata have escaped powerful cyclones.

Kolkata, formerly known as Calcutta, was once India’s capital under British colonial masters before they shifted their headquarters to New Delhi in 1911.

“It was the worst and most terrifying experience I ever had in my life,” said Father Franklin Menezes, social work director of the Archdiocese of Calcutta.

“I just shut the doors and windows of my residence and kept reciting the rosary as the wind battered the windows with a sound like a roaring lion,” Father Menezes told UCA News on May 21.

For Kolkata-based student Ashie Singh, it was a nightmare for at least one hour.

“Tornadoes have earlier hit rural parts of Bengal but this time it came as a double whammy along with coronavirus, and it will take years to make good the damage,” Singh said. 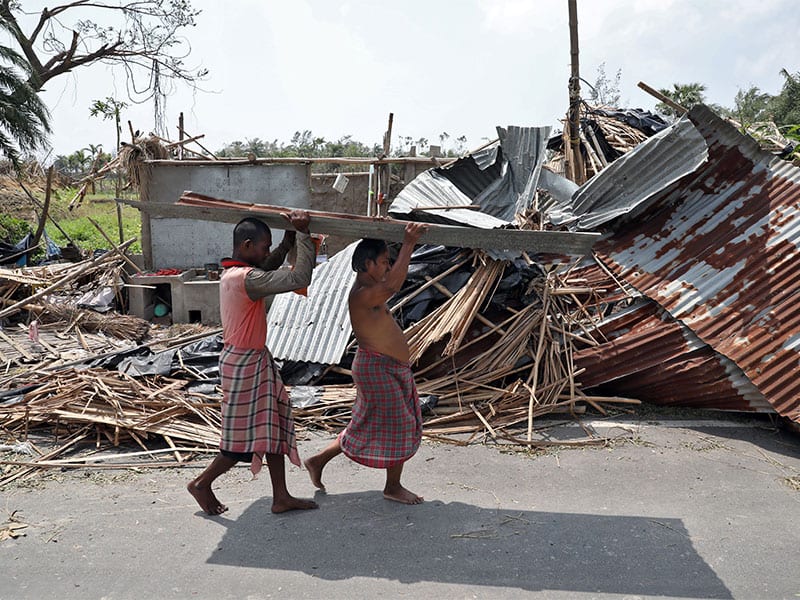 Residents carry tin sheets salvaged from the rubble of a damaged house in a village near Kolkata, India, May 22, 2020, in the aftermath of Cyclone Amphan. (CNS/Rupak De Chowdhuri, Reuters)

Sajjad Qarim, a resident of Mandarmani village, said the mandatory use of masks and social distancing to fight COVID-19 have had to be abandoned.

“Over 30 people are now staying in two rooms as several houses were destroyed. The devastation was serious as many houses are made of mud,” said Qarim.

In cyclone-hit Kakdwip township in South 24 Parganas district, residents staged a protest on May 21. They surrounded the civil administrator’s office demanding food packets and tarpaulins to set up makeshift houses.

“We have been left at God’s mercy, and there is no mercy around. What we have is only nature’s fury,” remarked a housewife, unable to conceal her tears, to a local television channel.

Most parts of Kolkata were hit by the storm, which uprooted thousands of trees and destroyed the green cover in the city, Father Menezes said.

“Public roads were flooded and even dead bodies were found floating in water as many died of electrocution,” the priest said.

The storm and floods destroyed embankments that protected coastal villages and fields from seawater. The saline water destroyed all crops, and farmers will not be able to cultivate their land for at least three or four years, the priest said.

Close to 1,600 villages are inundated in the districts of north and south 24 Parganas.

“Church people have not been successful in establishing any contact in those areas. Once we establish contact, we will be able to understand their plight,” Father Menezes added.

Archbishop D’Souza told UCA News on May 22 that the death toll could have been much worse had the state government not evacuated more than 500,000 people to safer places.

“Many churches and other institutions of the Catholic Church suffered damage. However, there is no loss of life from the community,” he said, adding that the “top priority is to arrange food for so many people who have lost everything.”

Several church facilities in coastal areas are accommodating people and providing them with food and basic requirements. 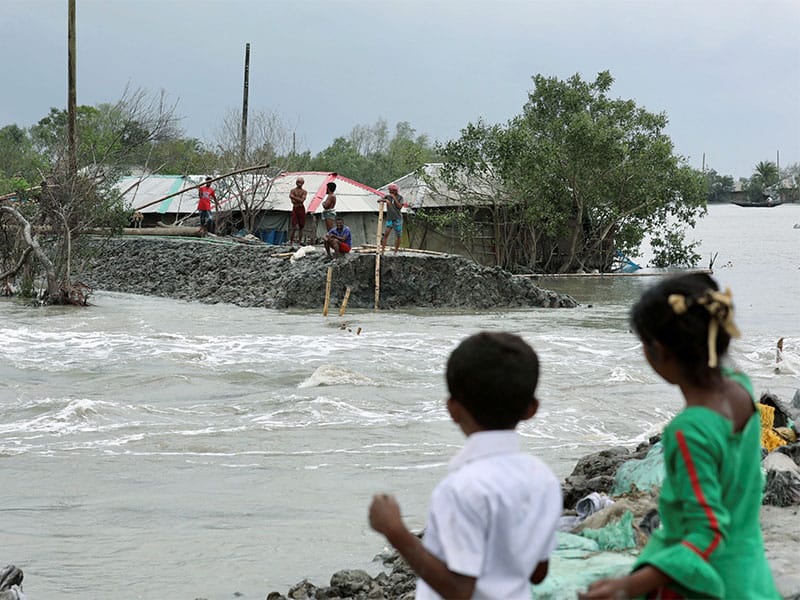 A coastal area is seen flooded after the embankment is destroyed following Cyclone Amphan’s landfall in Satkhira, Bangladesh, May 21, 2020. (CNS photo/Km Asad, Reuters)

“The wind and rain swept away thousands of acres of rice paddy ready for harvest, groundnuts and vegetables,” the priest told UCA News. It also destroyed the livestock of villagers.

An initial diocesan survey has found thousands of people “lost their livelihoods and hundreds of others lost their village mud houses.” He said they do not yet know the full extent of the destruction.

The Odisha government has made arrangements for people’s immediate needs such as food and shelter. “Therefore, we need to work with people for their rehabilitation by providing help to restart their lives through some income generation programs,” Father George said.

Featured Image: A man carries a tin sheet salvaged from the rubble of his damaged house in a village near Kolkata, India, May 22, 2020, in the aftermath of Cyclone Amphan. (CNS/Rupak De Chowdhuri, Reuters)