In Iquitos and Pucallpa, prices of oxygen, medicine
and safety gear have shot up because of scarcity

In Iquitos and Pucallpa, which were already battling a dengue fever outbreak when the pandemic struck, hospitals are filled with COVID-19 patients, while others with apparent symptoms are dying at home.

“There is no oxygen, there are no (hospital) beds, there is no safety gear for staff and there isn’t much staff, because many (health workers) have fallen ill and some have died,” including four doctors, Augustinian Father Miguel Fuertes, administrator of the Apostolic Vicariate of Iquitos, told Catholic News Service.

The health system in Iquitos, which because of a lack of test kits likely has far more than the 1,500 COVID-19 cases that have been confirmed officially, needs about 500 tanks of oxygen a day for patients, but the hospital’s oxygen plant is not working. Private companies can fill only a fraction of the number of tanks needed daily.

As patients’ desperate relatives try to obtain supplies, the price of a tank of oxygen–if one can be found—has skyrocketed from less than $30 to nearly $1,000, Father Fuertes said. Often, he added, “there simply aren’t any.” 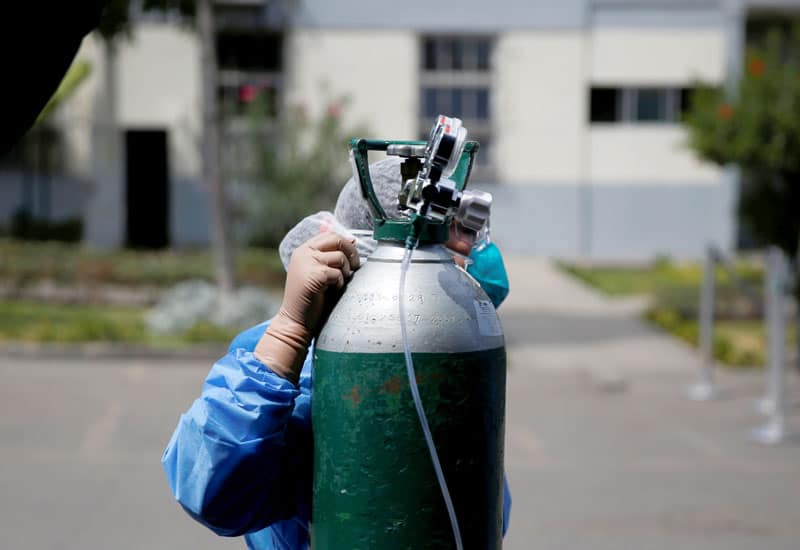 A nurse adjusts an oxygen tank next to a tent for COVID-19 patients in the parking lot of a hospital in Lima, Peru, April 16, 2020. (CNS photo/Sebastian Castaneda, Reuters)

On May 3, he and Father Raymond Portelli, a medical doctor, appealed online for the $120,000 needed to install an oxygen plant in Iquitos. By evening, people had donated more than three times that amount, and by the next day, the fund had reached nearly $500,000.

For Father Fuertes, the effort was doubly urgent, because a retired priest is among the sick.

Father Fuertes is arranging to install several small plants, although they will not make up the entire shortfall.

“The church cannot solve the lack of oxygen, but we can contribute to a solution,” he said.

Government officials have shipped some oxygen tanks to Iquitos from Lima, the capital, but they disappeared between the airport and the hospital.

“When that happens, there always seem to be more (for sale) in the street,” Father Fuertes said. “I don’t know if it’s speculation or theft. But just as there is immense solidarity, as shown in (the vicariate’s) campaign, there are also those who are profiting at the cost of people’s lives.”

In Pucallpa, Peru’s second-largest Amazonian city, “the number of cases is rising,” Bishop Martin Quijano told CNS. “People are dying in the hospital or at the hospital door.”

After listening to concerns of community leaders, Bishop Quijano said the vicariate decided to launch a solidarity campaign to raise funds for medical supplies that are in short supply. He is also considering installing an oxygen plant, because Pucallpa’s only suppliers are private companies.

Prices of oxygen, medicine and safety gear have shot up because of scarcity, putting them beyond the reach of many patients’ families. Vendors “are letting people die,” the bishop said.

“What can people do? People are disoriented. They go to the hospital, and there is no care,” Bishop Quijano said. “We have put together a group of people to see how we can help.”