When the sky is on fire
By Vicki Armour-Hileman
May 20, 2020
News
ShareTweet it!LinkedinEmailPrint

It was only 3 in the afternoon when the sky turned so dark that Claire Stewart, a Maryknoll lay missioner in Sao Paulo, thought she had lost track of time and night had fallen. Once she realized it was only mid-afternoon, she hurried home, assuming a sky that dark must mean a massive storm was brewing.

There was a storm of sorts, but not the kind she was expecting. Deep in the Amazon, a perfect storm of environmental issues came to the attention of the world through a series of fires in the rainforest that lasted from August through October. Smoke from the fires carried over a thousand miles from the Amazon to Sao Paulo, turning day into night and producing black rain.

Photos from the Amazon that reached the U.S. during those months showed a sky on fire, a sign of an ecological crisis.

Through their vantage point of living among vulnerable communities throughout the world, Maryknoll lay missioners like Stewart often have front-row seats to the environmental disasters that are evidence of a planet in ecological distress. 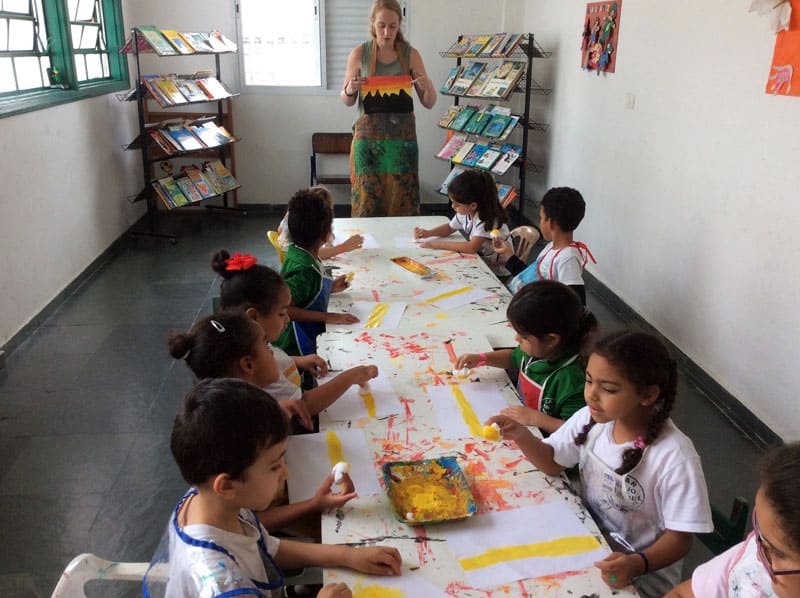 In the art classes she teaches to children from low-income families, Claire Stewart reuses items from São Paulo’s ubiquitous trash. She also teaches many other environmental lessons. (Photo courtesy of Maryknoll Lay Missioners/Brazil)

Missioners serve as witnesses to the effects of these events on people in the communities where they live, and several lay missioners work in ministries that accompany those who are most affected, teach environmentally sustainable practices and raise awareness in the United States.

Missioners in Brazil are particularly involved in a ministry of “caring for our common home,” as Pope Francis puts it in “Laudato Si’,” his encyclical on the environment.

In Joao Pessoa in northeastern Brazil, one of these lay missioners is Flavio Rocha da Silva, who promotes a spiritual awakening around environmental issues and advocates for a concrete response to destructive business and agricultural practices that harm the environment. Through his research, which he publishes in a variety of websites, blogs, and scientific magazines, he especially brings awareness of the connection between land issues and water.

Da Silva explains that most of the fires in the Amazon were started deliberately, part of a trend of increasing deforestation, which is one of many human practices that are contributing to climate change. One problem with deforestation, according to his research, is that “science has shown the great importance of forests for maintaining rain cycles — not only in the Amazon, but throughout the world.”

“It is as simple as this: No forest, no water,” he told Voices of Compassion, the magazine of Maryknoll Lay Missioners. He noted that water shortages are instrumental in causing mass population displacement, forcing “millions of people to migrate to big cities like Rio de Janeiro and Sao Paulo.”

Lay missioner Joanne Blaney, who works in Sao Paulo, concurs that the growth of the city is due in part to environmental factors. The city’s ever-growing population today exceeds 12 million. As she explains, “People left the rural areas because of droughts as well as lack of jobs and other economic opportunities,” with the result that 86 percent of Brazil’s population is now urban. 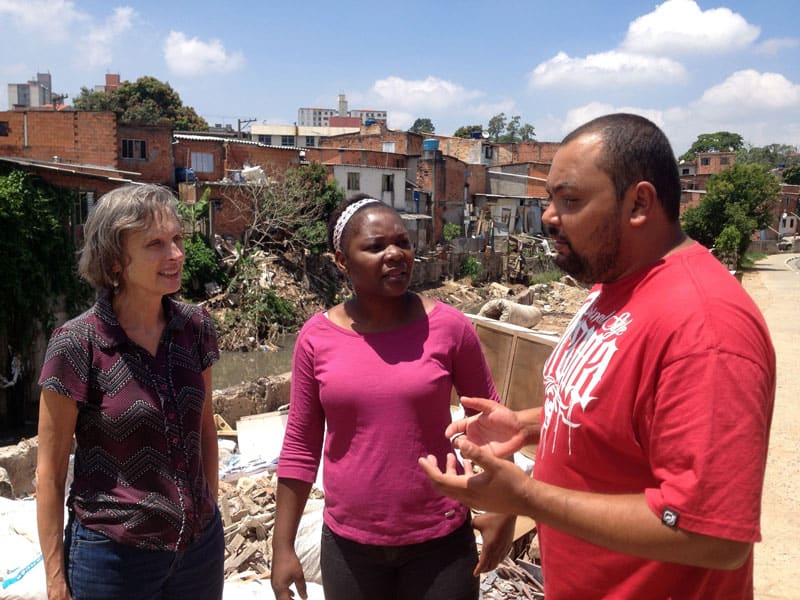 Joanne Blaney (left), with Maryknoll Sister Armeline Sidoine and José Silva, an educator and community leader, in the favela of Capão Redondo, which suffers from both drought and flooding and has high levels of urban violence and environmental degradation. (Photo courtesy of Maryknoll Lay Missioners/Brazil)

For most newcomers to Sao Paulo, however, dreams of financial success and freedom from environmental stresses turned out to be an illusion. Because the city’s population has grown faster than its infrastructure, 2 million of its people live in favelas — informal, resource-poor communities that lack many basic services such as trash collection, access to clean water, and sewage management.

The same environmental factors that lead to drought and subsequent migration are also creating increasingly torrential rains, along with other changing weather patterns. On Feb. 10, Sao Paulo was hit with what Blaney describes as “the worst flooding in 40 years, shutting down highways and side streets, stranding cars and trucks and buses.”

While these conditions are difficult for the general population, Blaney said they are worst for “the estimated 35,000 homeless people living on the streets in Sao Paulo.”

Glaucia, a local homeless woman, described her fear and hopelessness to Blaney in the aftermath of the rain.

“I was so afraid,” she said. “The little that I have was ruined. … Many of us are sick, and I lost my medications in the chaos.”

Having witnessed people navigating these complex issues, Blaney said she agrees with the conclusions of the Synod of Bishops for the Amazon, held last October at the Vatican. The synod’s final document states that the displacement of people due to a mix of economic and environmental factors “demands a joint pastoral response in the urban slums” and “missionary teams” prepared to accompany the people who live in them.

One of the most visible environmental issues in urban centers like Sao Paulo is the accumulation of trash, which clogs gutters and storm drains, increasing the possibility of flooding during heavy rains.

Stewart responds to this issue by seeing the potential for creativity and beauty in what others would consider garbage. In the art classes she teaches for children from low-income families, Claire uses recyclable items from the trash, including “toilet paper rolls, water bottles, lids, egg cartons, yogurt, recycled paper, as well as plastic and Styrofoam packaging from the market.” 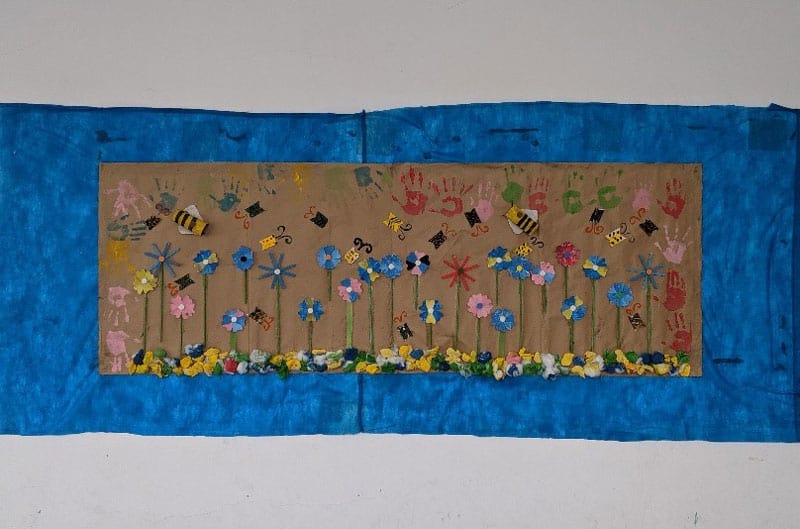 In addition, Stewart’s classes focus on “ways we can reduce our carbon footprint, the importance of plants, and ways to save the bees.” Her approach seems to be a success. “Within each of the spaces I have taught,” Claire reports, “I have seen a significant increase in the use of recycled items in activities with the children outside of my class.”

Stewart knows that her impact “is small compared to the 27,000 tons of trash that is produced by the city each day, but hopefully it is creating a sense of responsibility in how each of us affects the planet with the choices we make.”

Maryknoll Lay Missioners published the original version of this article. This version was edited and distributed by Catholic News Service

Featured image: A fire that was likely set illegally to clear a forest in Caparao’ National Park in Brazil’s state of Espirito Santo (Claire Stewart, courtesy of Maryknoll Lay Missioners/Brazil).

Vicki Armour-Hileman is the admissions manager of Maryknoll Lay Missioners. She is the author of Singing to the Dead (University of Georgia, 2002), a book about her experience as a lay missioner serving refugees in Thailand.