Prelates criticize U.S. and Mexican governments
for lacking ‘the most minimum sense of humanity’

MEXICO CITY (CNS) — Guatemala’s bishops have criticized continued deportations during the COVID-19 pandemic, saying the practice has “no sense of humanity” during a health crisis.

In a strongly worded statement, the bishops called on the United States and Mexico to stop deportations, which “strike us in the context of national precariousness in terms of health services and strategies to contain the pandemic.”

They also condemned a lack of solidarity and stigmatization at home toward those being returned.

“How is it possible that all the United States is throwing out all of these citizens, who have worked honorably in favor of the U.S. economy, even though their status wasn’t considered ‘legal,'” the bishops said in the April 15 statement.

“Are they no longer useful to U.S. society, particularly if they have contracted coronavirus? If the governments of the United States and Mexico have always presented themselves as champions of the defense of human rights, why do they now demonstrate the opposite?” the statement continued.

“The example of both governments to the world is one of not having the most minimum sense of humanity.”

Deportations of migrants to Central America has continued during the COVID-19 crisis, even though the countries to which the migrants are being sent have otherwise closed their borders and imposed quarantines. 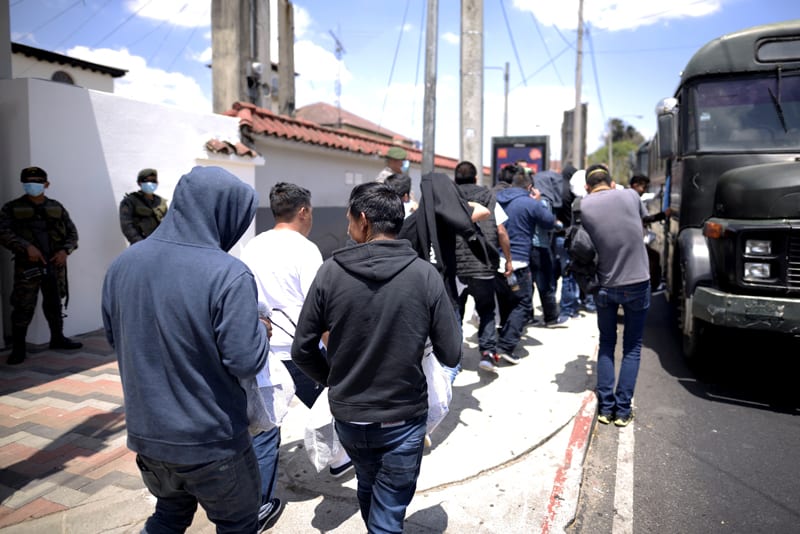 Guatemalans deported from the U.S. board a bus outside La Aurora International Airport in Guatemala City March 19, 2020. Guatemala’s bishops have criticized continued deportations during the COVID-19 pandemic, saying the practice has “no sense of humanity” during a health crisis. (CNS photo/Fabricio Alonso, Reuters)

Guatemala closed its borders March 17. Some of the migrants being returned from the United States previously passed through the Scalabrinian shelter in Guatemala City, but the facility suspended service for returnees, saying it was unable to provide proper medical attention in case of a coronavirus outbreak.

Health Minister Hugo Monroy said April 14 that half of the country’s approximately 200 COVID-19 cases came to the country with deportees — including 75% of people on a flight in late March. Monroy later retracted his comments.

The bishops’ conference, meanwhile, called on the country to better accommodate returning migrants, nothing that some communities had prohibited people returning from other countries due to health concerns.

“When they send remittances, they’re congratulated and praised. Now that they return deported without a dollar in their pocket, they’re discriminated against and rejected. Is this the Christian spirit? Is this national solidarity?” the statement asked.

The statement also recognized the hardship suffered by the poor in the Central American country, where sheltering in place often means potential hunger as well as a loss of income.

“It is of grave concern the situation of millions of Guatemalans, who live day-to-day in informal jobs and now don’t receive an income,” the bishops said.

The bishops praised government efforts to help those sheltering but warned of “the same old management,” in which social programs are used for political purposes and “favoritism” is commonplace.

Featured image: A bus driver outside Guatemala City directs people boarding a bus March 19, 2020, after they were deported from the U.S. (CNS photo/Fabricio Alonso, Reuters)