Getting food to those in need during El Salvador quarantine
By Peter Altman
Apr 14, 2020
News
ShareTweet it!LinkedinEmailPrint

Amid COVID-19 pandemic, lay missioner reaches out
to impoverished communities with food deliveries

Despite a national quarantine in El Salvador, Maryknoll Lay Missioner Ann Greig has managed to pick up three tons of rice, beans and soy from a foundation in the capital city of San Salvador called El Nuevos Horizontes Para Los Pobres (New Horizons for the Poor) to distribute to families in need.

Greig co-founded the Health Through Nutrition Soy Project in 1994. The project strives to improve the health of Salvadorans who have limited means, especially malnourished children and pregnant women. Based in San Ramón, a district of San Salvador, it serves some 250 individuals from 50 families with fresh soymilk and other items such as banana soy bread, beans and rice, pasta and soy pancakes.

The soy program regularly receives donations from Nuevos Horizontes, and the foundation reached out to her right after the March 21 announcement of the national quarantine due to the global COVID-19 pandemic to tell her that they had recently received a shipment of food.

Greig realized that this was an opportunity for her to get food into the hands of people in nearby communities who struggle to survive and are now unable to leave their homes to earn money to feed their families. “I kept hearing people in the community ask, ‘What are we going to do?’” she says. “So I asked myself, how can we get food to people who are unable to work?”

Loading up her pickup truck with as much food as she could, Greig made three trips across San Salvador in early April to deliver it. She had two men to help her. For physical distancing, one of them rode in the bed of her pickup, while the other sat in the backseat. All three of them wore masks.

“Initially I was afraid because I had heard how strict they were about enforcing the quarantine, but I knew that something had to be done to get food to the people,” Greig says. “We were stopped at roadblocks three times by the police and military, but there was no problem once I told them that I was delivering humanitarian aid.” 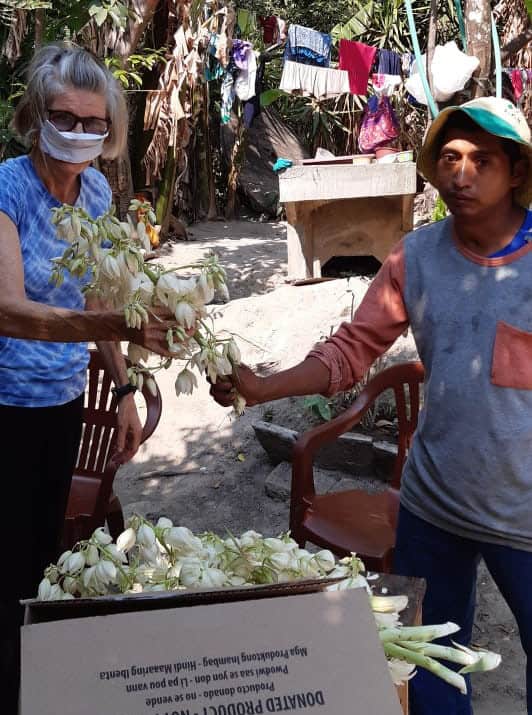 Greig brought the bulk of the food to two very poor rural communities up on the San Salvador Volcano: Las Valencias, which has 100 families, and Las Nubes, which has 25 families. She has a relationship with these two high-needs communities through her base community, Pueblo de Dios en Camino (People of God on the Journey).

“People were visibly relieved when my truck pulled into the communities with the food,” Greig says. “They thanked me and thanked me and thanked me. I told them ‘Remember, whenever you’re able to do something like this, it is because of a chain of people: donors who provide the money for the food, the soy program, Pueblo de Dios and people in the local community who pick up and distribute it.’”

The missioner, who is originally from Rolla, Mo., adds, “I have said many times that being a Maryknoll lay missioner is a privilege. In responding to the emergency situation here with the distribution of food for families without employment, I have to say a big thank you for God’s love and for all the hands that participated in this act of solidarity.”

The people from the two communities worked as a team to unload the food from Greig’s truck, while practicing social distancing.

Now Greig is working on figuring out how to get food to other beneficiaries of her soy program. “Some of our beneficiaries live in gang-controlled territories, so we can’t deliver to them.”

Based on Greig’s 38 years in mission, there’s no doubt that she’ll figure it out.

A version of this story was originally published on the Maryknoll Lay Missioners’ website.

Featured Image: Unloading the rice, beans and manna at the first distribution point at the Palacios’ family in the community of Las Valencias. (Ann Greig/El Salvador)