Responding to Hunger in Africa

Household pets in America eat better than the average South Sudanese. That, says Maryknoll Father John Barth, who serves in the East African nation, is in normal times. Today a chronic food shortage has become a crisis as drought and famine have struck various countries across the African continent.

“The lucky ones here in South Sudan are eating one meal a day,” says Father Barth, who is assistant pastor of St. Teresa Parish in Isohe village, in the Torit Diocese in the southeastern part of the country.

Along the east coast of Africa and into the southern part of the continent, well over a dozen countries face food crises brought on by a variety of environmental, political and economic circumstances. Millions of people are going hungry, are malnourished or starving as drought for two years running, driven in part by the El Niño weather pattern, has led to food shortages and subsequent spikes in food prices.

In two areas in South Sudan and Kenya, where drought has been exacerbated by political and ethnic conflict, the Maryknoll Fathers and Brothers are responding in efforts led by Father Barth and Father Lance Nadeau. Both men seek to pair direct food relief with long-term efforts to avoid future crises among people they serve.

For Father Barth that means personally obtaining and distributing food supplies and overseeing projects to improve water resources in and around his parish community. Last year Maryknoll purchased a new tractor for the parish to increase local food production. 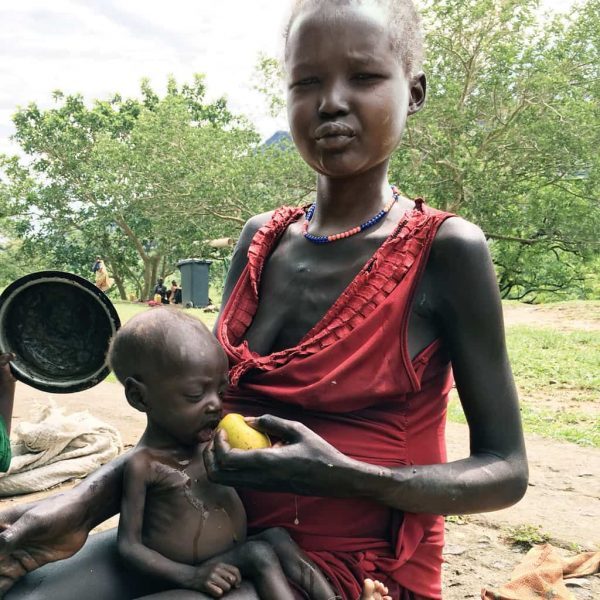 “I cross the Uganda border every few weeks to buy emergency food relief—maize, beans, salt, cooking oil—for students at our parish and for distribution to the neediest in our parish,” Father Barth says.

Passing through Uganda immigrations, the Maryknoll priest takes note of a whiteboard on the wall behind the immigration officer that tracks the number of South Sudanese who entered Uganda at that small border crossing. The total in April was more than 1,100, and that is one of the smaller crossings around the country.

“They still keep fleeing their country because there is less and less food, or the 500 percent inflation makes what little food is available just too expensive,” he says.

The United Nations has declared famine in two areas of the country, and says 5.5 million people will be on the verge of starvation by July if they don’t get food, according to a report by IRIN, a news and analysis agency originally established by the U.N. to cover humanitarian crises.

More than 270,000 South Sudanese who have fled their country are now in the Bidi Bidi refugee camp in Arua, Uganda, Father Barth says, and their number is growing as people flee not only drought and famine but the violence of South Sudan’s four-year civil war.

“It is their only hope for food and security,” Father Barth says. “Many of these tired, hungry people travel on foot for days to reach Bidi Bidi Camp and the others built by the U.N. with the permission of the Uganda government and strung out along the border with South Sudan.”

The food he brings back from Uganda helps feed the community of St. Teresa Parish. Until the World Food Programme took over in March, Maryknoll was also feeding patients in their mission hospital there, among them infants suffering from malnutrition, Father Barth says.

“Not far from my office their crying is a constant sound all day long as the nurses attach them to IV drips,” the missioner from Buffalo, N.Y., says. “If not for U.N. food from the World Food Programme, their fate would certainly be sealed.”

Maryknoll’s own emergency food relief also helps feed students in the two schools in the parish, Father Barth says. The students are happy when they receive beans for supper, instead of the usual asida, a starchy paste made from corn or sorghum, he says. Asida is “not too nutritious but it fills the belly.”

Like his colleague in South Sudan, Maryknoll Father Lance Nadeau works to help feed people in the Turkana area, across the border in Kenya, where the same drought has escalated conflict between rival groups of ethnic pastoralists fighting over scarce resources. In this area, the local Turkana people have clashed with neighboring Dassanech people over water and grazing land.

In February, Kenya’s government declared the drought and food crisis in some regions, such as Turkana in the north, to be a national disaster.

Through Father Nadeau’s oversight, the Maryknoll Society provides food relief and a food bank at its Todonyang mission near the shore of Lake Turkana close to Kenya’s borders with both Ethiopia and South Sudan.

At Our Lady Queen of Peace Integrated Centre, Maryknoll helps feed and educate more than 160 boys and girls from the Turkana and Dassanech ethnic groups from the surrounding Todonyang area.

Working with the Missionary Society of St. Paul the Apostle, Father Nadeau and Maryknoll seek not only to provide for the students and their futures, but to lay the foundations for peaceful and collaborative coexistence between the two ethnic groups.

“We need funds to buy more food and also to reach out to more people who hardly have anything to eat,” Father Nadeau says, adding, “and prayers to strengthen those in dire need of support.”

To support Maryknoll’s efforts to feed those affected by the famine in Africa, go to Maryknoll Emergency Relief Fund for East Africa.

Featured Image: A woman in South Sudan holds a child while waiting to be registered for food distribution in parts of the war-torn country. (CNS/S. Modola, Reuters)