A Maryknoll priest and a lay missioner serve the elderly together in Cambodia.

|| Story and photos by Sean Sprague

San Sophanna sits on the floor, cross-legged weaving a mat out of old rags collected from a recycling center. It takes all day for the 70-year-old Cambodian woman to make the simple floor mat, which will be sold for $1. She is in a good place now, but suffered terribly during the genocidal rule of the communist Khmer Rouge.

“I grew up during a golden age for Cambodia, the 1960s, when it was a peaceful Kingdom,” Sophanna says. “We were not rich but the living was easy.”

In the 1970s the fanatical Khmer Rouge enslaved the Cambodian people and slaughtered well over a million people, possibly as many as 2 million, in the Southeast Asian country. Although the regime was defeated in 1979 by Vietnamese forces and Cambodia gradually recovered, and is now becoming a booming Asian economy, many impoverished people are still struggling to catch up.

The elderly, in particular, bear the scars of those difficult years. Khmer Rouge soldiers killed Sophanna’s husband and two of her three children. She never found her third child. She now lives and works in the sewing workshop with another elderly woman, Bun Sokhen, 65. Without families, both women have only each other for company and say they are not unhappy. They are both beneficiaries of a Maryknoll project that provides seniors with health assistance, hot meals and even help with keeping a roof over their heads in the Anlong Kngan slum where they live, just outside of Phnom Penh, Cambodia’s capital. 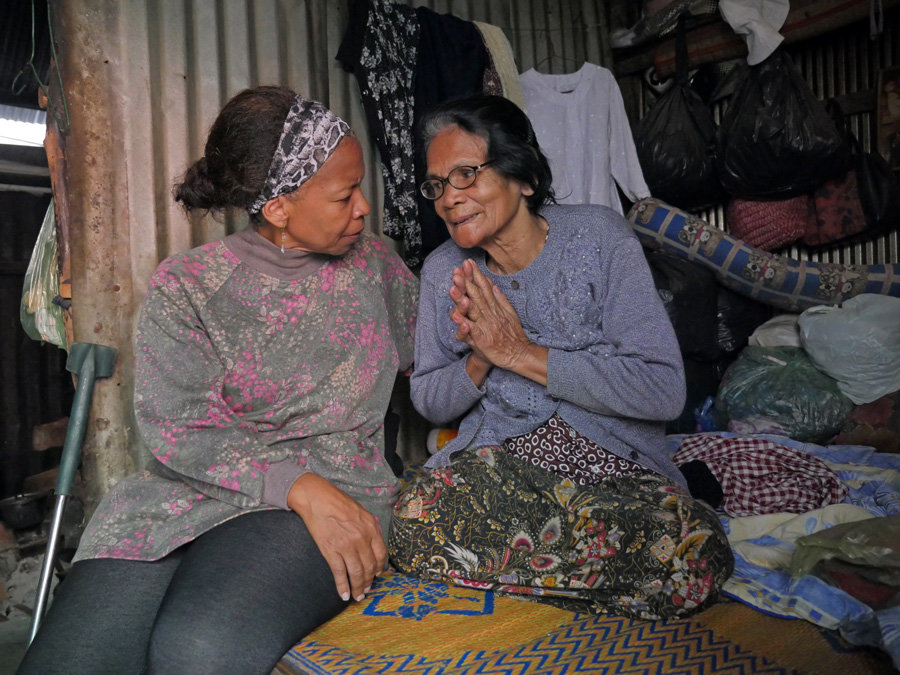 Maryknoll Father Robert Wynne also lives on that dusty plain where people were forcibly resettled in 2001. A fire of suspicious origin burned them out of their inner-city slum in a part of town that was ripe for high-rise development. Almost 13,000 poor people were evicted and relocated to Anlong Kngan, a former rice paddy that had no running water, electricity or roads. Abandoned, they were left to put up shacks and fend for themselves.

Today the infrastructure of Anlong Kngan has improved considerably, and the area has water, electricity, schools, asphalt roads and a health center, although most of the residents remain poor and their homes ramshackle, some perched precariously over open and malodorous sewers. It is here that Father Wynne oversees Maryknoll’s multi-faceted project.

“The main emphasis at first was helping people with HIV/AIDS,” Father Wynne says. “Now, thanks to the use of affordable anti-retroviral drugs, AIDS is less of an emergency; although we keep up our HIV awareness program.” He says the project has always helped local children go to school by providing uniforms, books and an after-school tutoring program where they also get nutritious food five times a week, but now it has begun to focus on the needs of the community’s elderly.

“More recently we started our program to help the elderly, with 41 people currently getting assistance,” the missioner says. “We seek out single adults living alone without any support from their family. 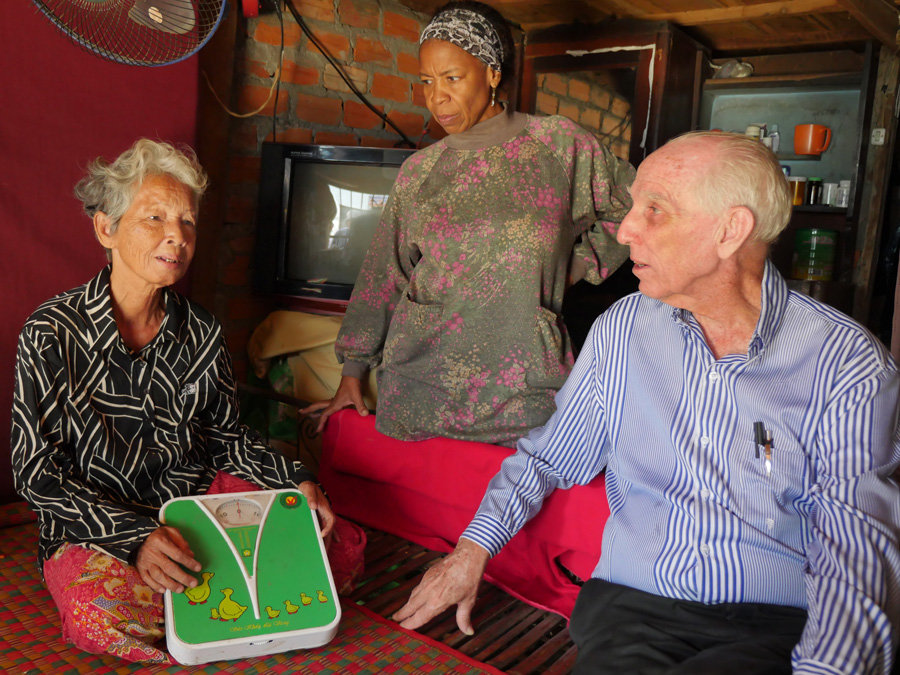 Noun Rosef (l.), 71, tells Lay Missioner Dee Dungy and Father Robert Wynne how she earns $2 a day to help support herself by weighing people outside her home.

At 78, Father Wynne, who is still fit and healthy, clearly identifies with the senior Cambodians he ministers to now. Raised in Worcester, Mass., he served in mission in Hawaii for 29 years before coming to Cambodia in 2006. The tall missioner with a wide grin is a beloved figure in the huge shantytown.

Twice a week he rides 12 miles on the back of a motorcycle to Phnom Penh, where on Wednesdays he attends a meeting of all Maryknoll missioners working in Cambodia. Early the next morning, before heading back to Anlong Kngan, he celebrates Mass with the Missionaries of Charity. On weekends, he helps provide services for the foreign English speaking Catholic community working in Cambodia, a largely Buddhist country. Father Wynne’s pastoral and sacramental work includes occasionally celebrating Mass with a small Vietnamese Catholic community in Anlong Kngan.

But his main mission is the corporal works of mercy to the needy in the sprawling settlement. He is helped by a paid staff of Cambodians, some of whom he has put through school, including college, and by Maryknoll Lay Missioner Dee Dungy, from Fort Lauderdale, Fla., who was responsible for getting the elderly project started.

“Our beneficiaries are aged from 50 to 99,” Dungy says. “We provide them with cataract surgery and eyeglasses if needed and encourage them to come to exercise classes to keep fit. We provide a workshop where they can make the mats and do other handicrafts to raise a modest income.”

Dungy also takes participants in the program on outings to the beach and to visit museums, including the Killing Fields memorial, which inevitably brings back painful memories of the atrocities committed during the Khmer Rouge reign of terror.

“We bridge the gap between the youth and elderly, who explain to the youngsters what it was like during the horrors of the Khmer Rouge era,” she says.

Dungy, who has been a lay missioner since 2005, also works to counter human trafficking, another facet of the Maryknoll project, and meets with groups to alert people to the dangers of seeking work abroad and how best to protect themselves if they do go.

On a typical morning, Dungy and Father Wynne walk through the narrow twisty streets of Anlong Kngan to visit the elderly. The walkways have been upgraded to concrete in recent years by other nonprofit organizations, but the houses are dark, tiny and suffocatingly hot when the sun shines down on the corrugated metal roofs.

Oun Sophat, 76, is deaf, wheel-chair bound and a widower, who lost his wife a year ago. He is an evangelical Christian and obviously appreciates the blessing and hug Father Wynne gives him. Sophat cannot speak, but his beaming smile speaks a thousand words. 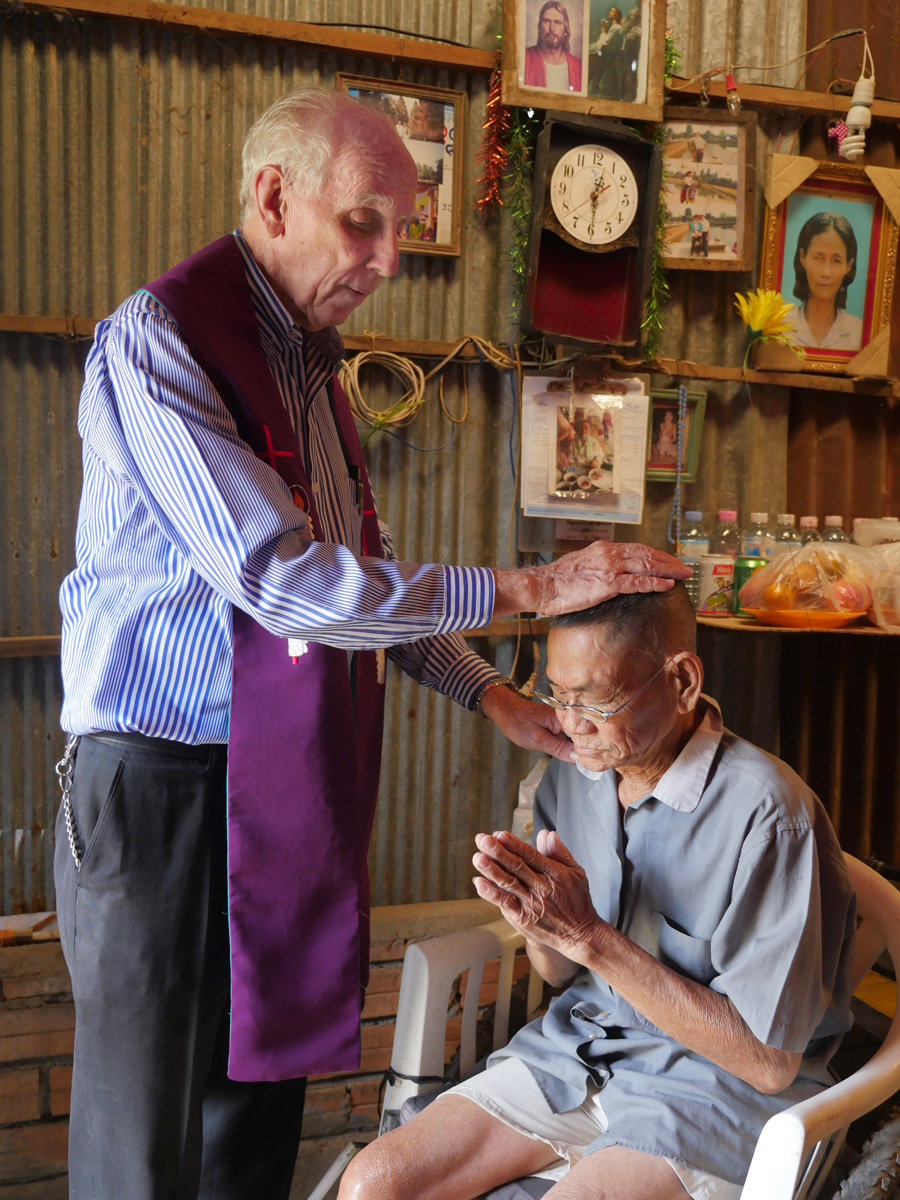 On his morning rounds in Anlong Kngan, Father Wynne gives a blessing to Oun Sophat, 76, a widower who is deaf and wheelchair bound and grateful for the visit.

Noun Rosef, 71, lives in an immaculately clean one-room house with pictures of herself on the walls from when she was young and married. Her prize possession is a scale for weighing people.

“I sit outside for a few hours next to my scale and passers-by who want to know their weight pay a few cents for my service,” she says. “On a really good day I can earn as much as $2. It’s not  much, but the work isn’t hard.”

Kong Hak, a 64-year-old woman with a hunched back, lives in a shaky bamboo shack, about six-feet square, that hangs over an open, fetid sewer drain. Her home is protected from the rains by a sheet of corrugated metal that Maryknoll provided.

Dungy says that when she met Hak, all the woman had to eat was rice and salt. Now she is kept alive by the meals she receives through the Maryknoll project, along with some help from neighbors. To visit her, the missioners have to crawl through a low entrance into her home and squat on the slatted floor—in danger of falling through to the foul waters beneath.

“I never married and my life has always been hard,” Hak says. “My parents and three of my siblings were killed by the Khmer Rouge. It’s all I can do, just to survive, and I am helped greatly by Maryknoll.”

Featured Image: Father Robert Wynne chats with Soun Sambat about the new house Maryknoll is helping build for her and her 10-year-old grandson.