Maryknoll priest from West Philadelphia has accompanied the people of Korea his whole priestly life.

“There were thousands of refugees at the time. People were starving; there was extreme poverty… The condition of hospitals was frightful,” he recalls.

The first assignment the 26-year-old priest had was to minister to refugees and orphans from the Korean War at the Maryknoll-run Korea Sacred Heart Orphanage in Cheongju. Though Maryknoll missioners were trying to fulfill the children’s needs, Father Hammond knew that they could not replace the love of a parent.

“We gave a lot of relief but saw a lot of suffering,” he says. “When you are young, seeing that imprints in your whole life.”

Since then, Father Hammond, now 83, has cared for all Korean people and developed a loving relationship with them. “As a missionary, it is essential to devote our whole lives—especially minds and hearts and even our physical abilities—to the people we came to serve,” he says.

For 30 years, the missioner from West Philadelphia worked as a pastor in the Cheongju Diocese in South Korea, while serving as diocesan vicar general for 20 years. Now the priest, who has been the Maryknoll Society’s regional superior for Korea since 1989, serves tuberculosis patients in North Korea, through Eugene Bell, a nonprofit that provides humanitarian and medical aid. 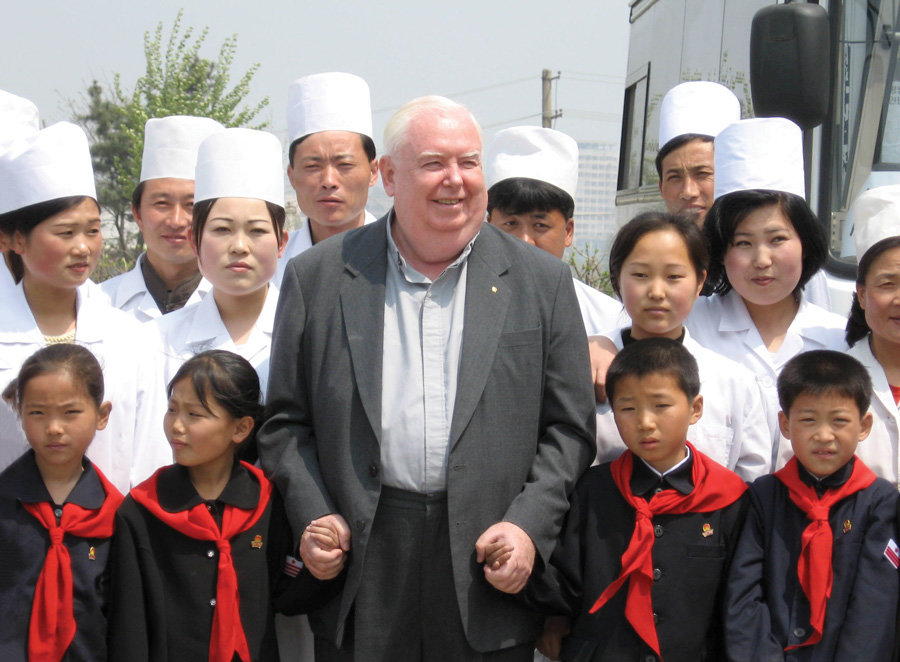 Father Hammond’s hope was to emulate the Maryknoll missioners who served in the northern city of Pyongyang until 1941, but for him to fully minister to the North Korean people, peace and reunification need to arrive in the divided peninsula. The Korean War, which ended in 1953, killed more than 5 million soldiers and civilians and divided the Koreas. Since the war, no Catholic priest or religious sister has lived in the North.

Father Hammond considers his visits to North Korea a pilgrimage, because, he says, the land is sacred ground due to the number of martyrs, including Maryknoll Bishop Patrick Byrne, Maryknoll Sister Agneta Chang, Korean Bishop Hong Yong-ho and many Christians who died for their faith. Father Hammond explains that the focus of his visits is not to evangelize directly, which the communist government would not allow, but to show compassion and build bridges with people who may not know what a priest is.

The Maryknollers who had been assigned by the Vatican to mission in the northernmost part of Korea in the 1920s relocated after World War II to the South, where they had a good relationship with the local clergy. Over the years, the economy of South Korea has flourished, the church was strengthened and parishes that were previously run by Maryknoll priests have been turned over to the country’s vibrant dioceses.

“We are used to working hamkke, which means ‘with.’ We work together with the local churches,” he says, adding that many Korean priests are engaging in missionary work not only in Asia but also throughout the world. Father Hammond also has been asked by the archbishop of Seoul to train young Korean seminarians.

Father Hammond’s own love for mission was first nurtured by the Sisters of Mercy at Waldron Academy in Pennsylvania. Later, reading about the heroic actions of early missioners in the book Men of Maryknoll persuaded him to join the missionary society when he was 14.

“My prayer every day, in all honesty, is that my heart will be like a Korean’s” – Father Hammond

Growing up in an Irish immigrant family in West Philadelphia, Father Hammond says that for him and his two sisters life revolved around his parish, St. Callistus Church. His father wanted his son to become a doctor, to which the teenager responded that as part of the Maryknoll Fathers and Brothers he would be “a soul doctor.”

Father Hammond was ordained a Maryknoll priest in 1960 and sent to Korea, which has become his adopted home. Throughout his years as pastor, he kept an open rectory door policy and tried to minimize administrative work so he could visit as many parishioners as possible.

“My prayer every day, in all honesty, is that my heart will be like a Korean’s,” says Father Hammond, whose Korean name is Ham Je-Do.

From the Korean people, he has learned to be patient, warm and sensitive to the little things, like remembering feast days, taking time to be with friends, and not being abrupt when talking to others.

Father Hammond has stressed the need to strive, as a Church and as individuals, for peace in the Korean peninsula through his work with the Korean bishops’ committee for the reconciliation between the people of the North and South and as the North Korean consultant to the Apostolic Nunciature of the Holy See in South Korea.

Yet, he knows that the obstacles to reunification might keep him from seeing his dream of a unified, peaceful and prosperous Korea. “Frankly speaking, I feel like I’m like Moses; I’d never see the Promised Land,” he says. “I thought I could have a closer contact with the people (of North Korea) … but someone else will.”

In the meantime, he continues to tend to those who are weary, tired and sick, especially those affected by tuberculosis in North Korea. This aid is essential because multi-drug-resistant tuberculosis (MDR-TB) is the biggest killer in the country, he says.

“All you can do is to share your love and concern for people when they are at their weakest moment, when they have a disease like MDR-TB,” he says. 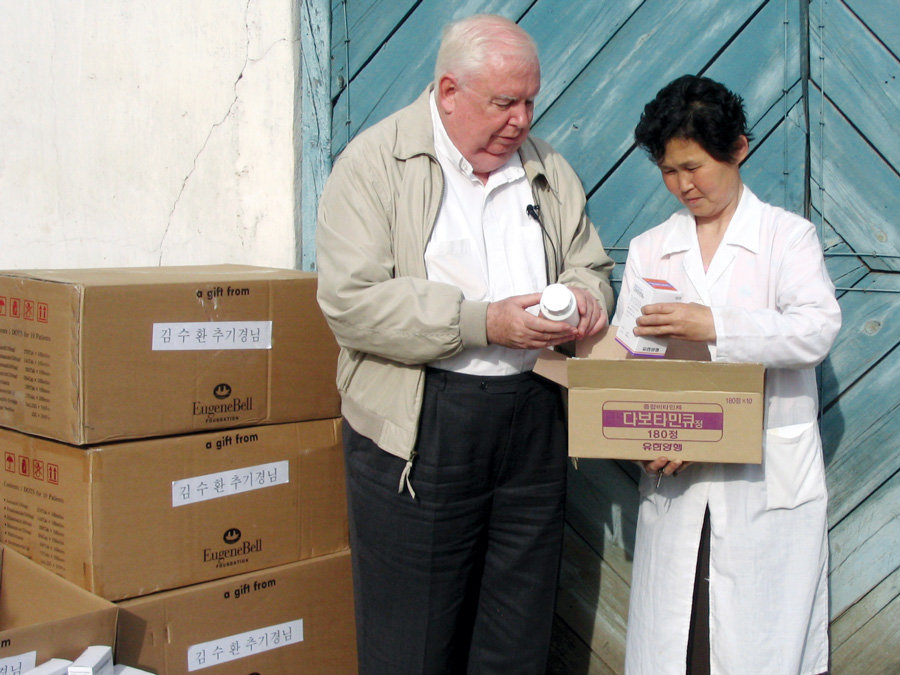 Father Hammond and nurse check tuberculosis medicine to be distributed.

Over the past 20 years, Eugene Bell has treated about 250,000 patients. The medical aid delegation is allowed to make two three-week visits per year, to bring medicines to North Korea. This 12-person delegation—which comprises doctors, nurses and several priests, including missioners from the Paris Foreign Mission Society and Guadalupe Missionaries—tests each new patient to confirm the diagnosis. “We have a lot to accomplish in a very short time,” Father Hammond says.

Eugene Bell has cured more than 70 percent of its patients, he says, compared with a worldwide cure rate of only 48 percent. Yet, only about 10 percent of the sick in North Korea can be treated by the delegation because of the amount of financial support required for the medicines and equipment, says Father Hammond. He wishes more could be done to relieve people of their pain and suffering.

“The most fearful thing in this world is apathy. We have a responsibility to love the North Korean people unconditionally,” Father Hammond said in a Eugene Bell video. “The children who are hospitalized (with tuberculosis) really need help. Their medical condition is very serious.”

And Father Hammond told The Catholic Korean Catholic Pastoral Information Magazine, one of the most beautiful and emotionally overwhelming moments of a trip is when a patient perseveres in his treatment and is cured.

“They’d say quietly, ‘Thank you for giving me hope, for giving me life,’ ” the missioner says. He adds that although he has never met a Catholic directly during his humanitarian visits, he experiences God’s presence in North Korea.

Despite the difficulties of going around the North Korean countryside at his age, Father Hammond is not showing signs of slowing down. As he prepares for another trip to care for tuberculosis patients, he says he wants to continue ministering to the people of Korea for as long as he lives. “There is no retirement in a relationship based on love,” he adds.

“My love for the North Korean refugees is what has kept me (going) as a missioner,” he says. “The affirmation of the Korean people, to be with those suffering in both North and South Korea (are sources of strength).”

Featured Image: Father Hammond at a treatment center in North Korea with children who are waiting for X-rays to see if they have tuberculosis. (Photos courtesy of G. Hammond)

Read more
In August, Father Hammond received the Gaudium et Spes Award, the highest honor bestowed by the Knights of Columbus, for his service to the sick in North Korea. To learn more about this, go to MaryknollSociety.org.