It could well be called Maryknoll volleyball diplomacy.

The trip was the idea of 16-year-old Catherine, a member of the school’s Maryknoll Affiliates. She organized the trip, with the help of her parents, Daniel and Tricia. It included teammate Ava and her mother, Nancy. The students took volleyballs, nets, game shirts, and love and enthusiasm with them on the trip, which took place the last week of June. In Cuba they met fellow volleyball enthusiasts from an informal community group called Barrio Habana Community Project, led by the husband and wife team of Pavel Garcia Valdez and Sandra Sotolongo Iglesias.

“We went to Cuba to show teens there our way of life and to give them a better understanding of American people, as well as to see how we could help them,” Catherine said. “We came home with new friends and the realization of how very nice and friendly they are.” 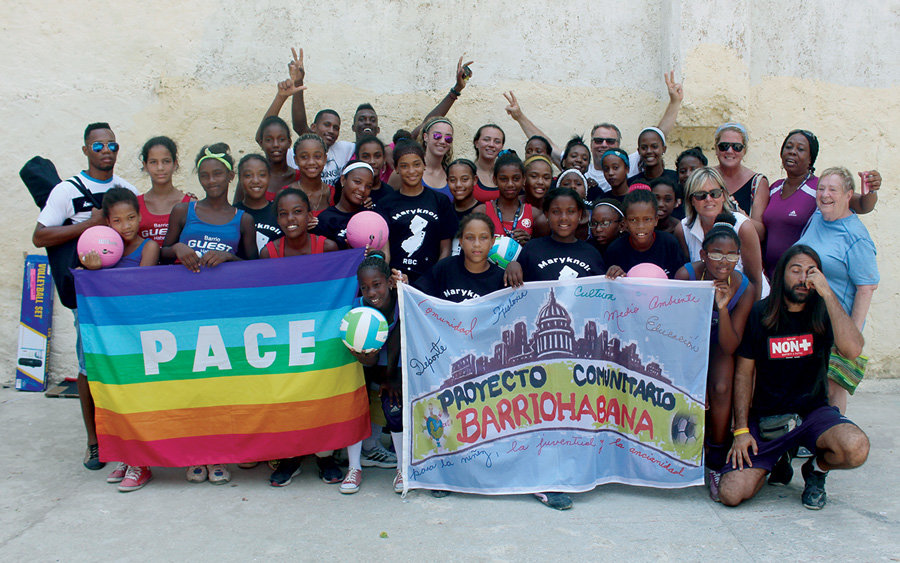 Catherine’s aim is to establish an annual competition between Cuban girl volleyball players and the Catholic high school team. She hopes to continue the program for five years, with the goal of bringing a team of Cuban girls to the United States to play at the end of that time. Her dream is to have the whole girls volleyball team from Red Bank Catholic go to Cuba next year. While the mission to Cuba was not an official school trip, it was sanctioned by Red Bank Catholic, and had plenty of support at the school, where students raised several hundred dollars to buy volleyball equipment for the Cuban girls.

Catherine, a junior, and member of the school’s varsity volleyball team, and Ava, a senior and captain of the team, traded the polished floors and air-conditioned court at Red Bank Catholic for the cracked concrete with sun-faded lines of an outdoor court. The fenced-in court was adjacent to a square in old Havana that also held a school, a church, and several apartment buildings in various stages of disrepair.

Among the gifts the girls carried were 15 T-shirts with the Maryknoll logo, a tribute to the mission consciousness the school fosters among its students through its Maryknoll Affiliate chapter. The Americans also brought red and blue game shirts, so the Cubans, adept at the game that is one of the five most popular sports in the country, could look official on the court. The Americans quickly learned that their Cuban counterparts were more than proficient at the sport and highly competitive in a friendly and congenial way.

Being just two, the Red Bank Catholic girls weren’t enough to form a team to compete with their Cuba friends, yet they played together in a variety of fashions and got to knew each other as athletes and fellow teenagers.

“If you can help people in one way, like sharing a sport, then you can connect on another level,” Catherine says. “All of the girls were very warm and open, and were curious about our lives. They made an effort to communicate, which made us feel right at home with them.”

Kelly Booth, who is a religion instructor, campus minister and moderator of the school’s Maryknoll Affiliates program, said, “These two students exemplified what I have taught and frequently tell the students: Be a Casey by doing as much as you can, as long as you can, while you can.”

The school’s nickname is the Caseys after the late Monsignor Joseph T. Casey, a military chaplain and retired rear admiral in the United States Navy who served as curate at St. James Parish in Red Bank. Monsignor Casey believed in youth involvement in the community and in organized programs to foster learning and fitness for young people.

In 2007, Red Bank Catholic was the first high school in the nation to form a Maryknoll Affiliate program, under moderator Mary Logan and a group of seniors that included Booth.

Catherine chose Cuba for the mission because of the opening of relations between the two countries and wanted to use her sport of volleyball to introduce American girls to their counterparts.

Muriel J. Smith is a freelance writer from Highlands, New Jersey, who accompanied Catherine and Ava on their mission trip.