Paying respects to a slain Cambodian hero, a Maryknoll lay missioner experiences the family of God.

In the past, I have taught a number of classes on Catholic Social Teaching at Catholic University of America and other places, and I always struggled to explain the notion of solidarity, feeling that I had only a tenuous grip on its meaning.

However, I think I learned for the first time what it means when I went with a group of friends to the funeral procession of Kem Ley. One of Cambodia’s most prominent political analysts and the head of a grassroots advocacy group, Kem Ley was an outspoken critic of the government here. Just a few days before his assassination, Kem Ley spoke on Radio Free Asia about the recent Global Witness report that documents how Prime Minister Hun Sen and his family have amassed a $200 million dollar fortune and put the country into an “economic stranglehold.” He was the father of four, with one on the way. A seminarian told me that in Kem Ley’s spare time, he used to come to the small Catholic seminary in Phnom Penh to give talks.

On Sunday morning, July 10th, he was gunned down at the convenience store of a gas station where he drank coffee and met with friends most mornings. I heard about the murder first from a Quebec missioner who sent me a bloody photo of the shooting, along with the press release about his murder. The missioner said he was there.
He had driven up to get gas when the murder happened, but not knowing who the victim was, assumed the place was being robbed and hightailed it out of there.

A Khmer friend sent me the same press release. She was shocked and disturbed, saying Kem Ley was the last hope for the Cambodian people.

News about his death spread rapidly around the world. The United States called for a “thorough and impartial” investigation into his murder. One man came forward and confessed to the murder, saying Kem Ley owed him $3,000 in repayment of a loan. However, this seems highly unlikely, since by all accounts, this man is a notorious gambler and never had a dollar to his name. 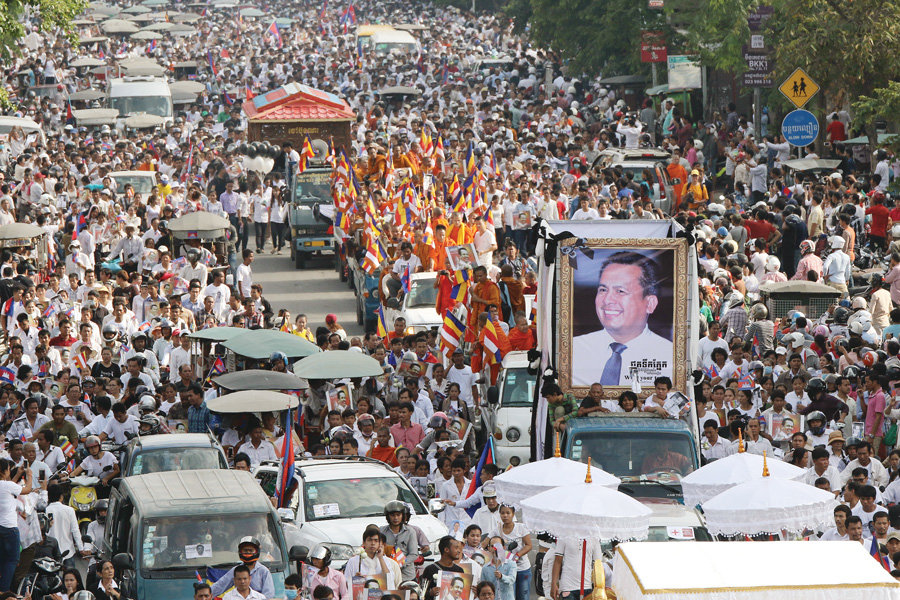 Many Cambodians were deeply disturbed at the news of Kem Ley’s death. One friend of mine told me she couldn’t sleep because of her sadness and fear over what the future holds.

Kem Ley was a champion for freedom of speech in a place not known for freedom of speech. Indeed, the same week of Kem Ley’s funeral, I read in the paper that the court in Cambodia rejected the appeal of a university student who was sentenced to one and a half years in prison for asking on his Facebook page if anyone would join him in a nonviolent revolution and for calling the king “stupid.”

The week after Kem Ley’s death, I attended a conference on the environment at St. Paul’s Institute, the one Catholic college in the country. A priest friend of mine asked the Buddhist monk presiding at the conference to take a moment of silence for Kem Ley and his family before the conference began. The monk complied. Later that day my friend received a call from the police.

Several Christian friends of mine decided to meet up to join the final motorized funeral procession in which Kem Ley’s body was being taken from the capital to his hometown. We wanted to pay our respects to this courageous man. When I arrived, I was shocked to see how many people were lining the road waiting for the procession to arrive. When it did arrive, it went on indefinitely.It seemed as if the whole country had come out to join it.

I was also struck by the fact that except for my friends and me and two members of the press taking pictures, there did not seem to be a single other foreigner there. This might have been due in part to the fact that the U.S. Embassy had put out one of its periodic warnings to stay away from large gatherings of people out of fear that violence might erupt.

Since I had a motorcycle, I merged into the procession. As I drove along snapping pictures, so many people came up to me to say, “Thank you” and “God bless you.” It was clear they were glad I was there. People in trucks or on the roadsides handed out water bottles to the passing participants. At one point, a car stopped abruptly 10 feet ahead of me, holding up the whole march. A man jumped out, waved to me, and offered me a water bottle. I was touched, but said “No, thank you,” taken a little off guard.

Then, it started to dawn on me what our presence there meant for the people. In the sea of Cambodians, we were perhaps the only foreign faces. The people seemed to be uplifted by our presence. I believe it was a sign to them that they are not alone, that people from other countries care about their struggle and will stand by them and support them, that these foreigners also share their admiration and respect for their “national hero,” Kem Ley.
It was then that the abstract notion of solidarity made sense to me. The struggle of others is not just their struggle, their hopes and dreams are not just their hopes and dreams, but mine as well. We are all one family.