For a Maryknoll Brother, serving the outcast is most important.

Maryknoll Brother Loren Beaudry believes Jesus is the best example for a Brother. During the more than 30 years he has been serving in Tanzania and throughout Africa, he has tried to model his actions after Jesus’. “Jesus says, ‘Whatever little you do to your neighbor, you do unto me,’” says Brother Beaudry, who grew up in Albertville, Minn. “To be a Brother is to grow in compassion for all people, especially the poor and outcast of society.”

Brother Beaudry, 62, has put this call into action while serving in Kenya, Namibia and now in Mwanza, Tanzania. Living in Mabatini, one of the poorest settlements of Mwanza, he visits individuals with mental illnesses, teaches young people with learning disabilities, spends time with senior citizens and the youth in his parish, and helps to inspire new vocations to Brotherhood.

For him, a way to share God’s love and compassion is visiting the Bukumbi Rehabilitation Village for the Mentally Ill, which houses about 20 patients, including children and adults. He works to promote a basic principle: Every person deserves respect, regardless of whatever condition they may have.

In his first weeks at the center, Brother Beaudry noticed that two adult patients, who are deaf and mute, were nicknamed “deaf and dumb boy” and “deaf and dumb girl” because people did not know their names. He encouraged the patients to give them new names, and now they are known as Maria and Joseph.

At first, Joseph “used to sit there like he did not care about anything; he did not smile,” Brother Beaudry says, but now, he reports, Joseph shows initiative, even finding a new patient who had wandered off and bringing him back to their weekly bingo game.

In addition to dedicating time to the patients, Brother Beaudry started a project to prevent malnutrition at Bukumbi. Kariba Deogratias Ngerega, a nurse and psychiatrist, says that prior to this project, the only food available to her patients was ugali (a dough dish made with cornmeal and sometimes cassava flour) and beans provided by the Ministry of Health. Now, residents raise chickens, rabbits and goats, and have started a small garden.

Better nutrition benefits the patients’ mental state, Ngerega says. “When you come here, (the patients) come to greet you. It means that now they are aware of their environment,” she says. 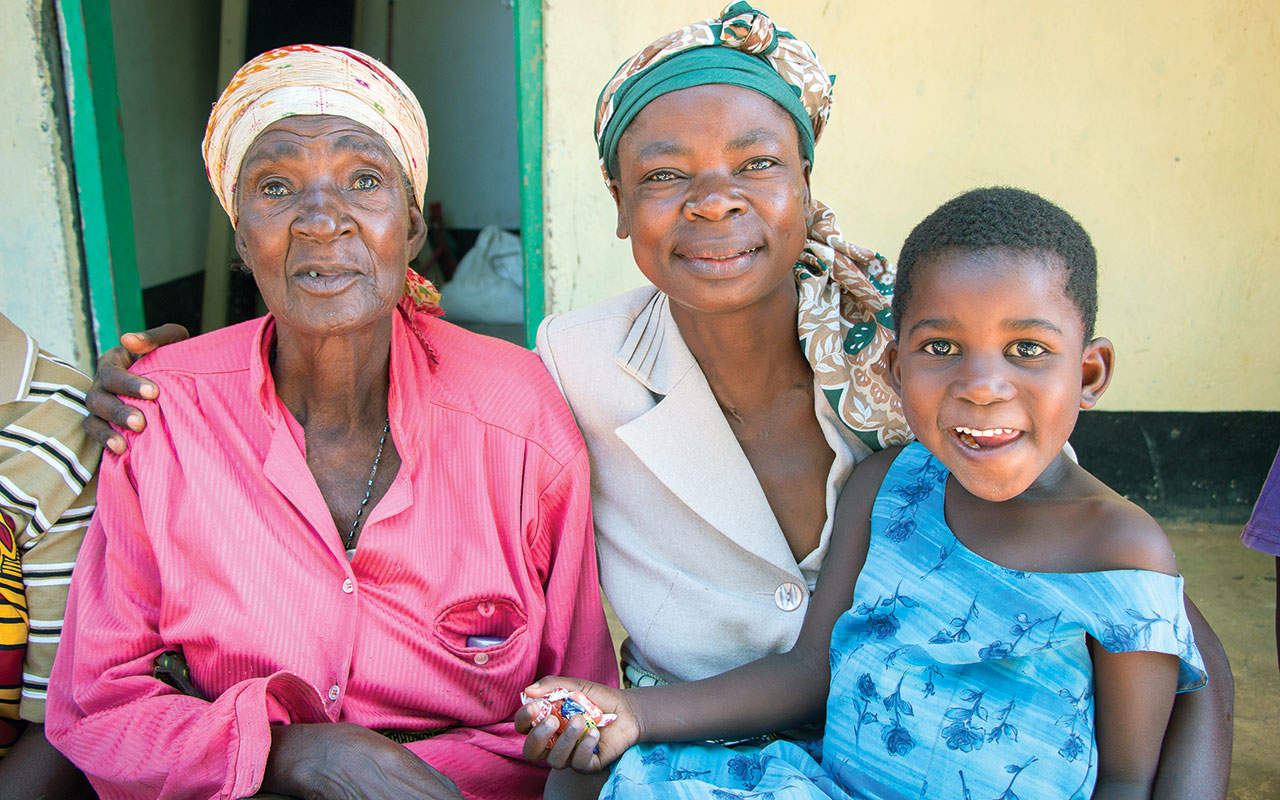 If they did not have a center to get treated, she adds, many of the residents would be out on the streets. “Most patients in the center are stigmatized, so they cannot go home,” she says. “They say this is their home.”

Brother Beaudry also volunteers at Tunaweza (We are able), an activity center where young adults with learning disabilities are taught skills to become self-reliant, including how to wash dishes and clothes, cook, and build relationships. At Tunaweza, students also are taught Swahili, sign language and other skills, including sewing, gardening, batik making and paper manufacturing.

Brother Beaudry goes to Tunaweza twice a week to teach writing, reading and math to 17 young adults. He also donated materials and hired two teachers who support the students’ journey to independence.

The missioner from Minnesota says this center greatly benefits the young adults, who often have not been sent to school and rely on their caregivers. “A girl I sponsor, Consolata, lives with her grandmother,” he says. “When the grandmother dies, what is going to happen? So, she is learning basic skills to survive, and maybe the training can help her earn a living on the side.”

When he is not serving at the Bukumbi center or Tunaweza, Brother Beaudry accompanies two Brothers of the Sacred Heart from the Mwanza Archdiocese and 15 young men interested in becoming Brothers of the Sacred Heart. He has helped them to paint their house, build chicken coops and a pigpen, relocate their firewood stove and install solar panels. He also talks to the young men about what living as a religious Brother is like.

“Jesus says, ‘Whatever little you do to your neighbor, you do unto me’”

Brother Beaudry’s own vocation began in St. Albert’s Catholic School in the Archdiocese of Saint Paul and Minneapolis, where School Sisters of Notre Dame talked about the poor in Africa. He dreamed of going to Africa and helping the poor. Yet, as he grew older, he focused on working in construction and as a spot welder.

When he was 23, he bought a house on a 4.25-acre property in Big Lake, Minn., and thought he was happy. But learning about people who devoted their lives to those who are most in need, including a priest working with homeless teenagers in New York and Mother Teresa in Calcutta, stirred his childhood desire to help others. “I started to search what the Lord was calling me to do,” he says.

During this search, one of his brothers mentioned that a Maryknoll priest from Minnesota had visited his parish to talk about his mission in Tanzania. This prompted Brother Beaudry to look into the work of the mission society.

“I always felt at home in Maryknoll and I always liked their mission goal, to not only serve the poor but ask the question why they are poor, trying to get to the root of the problems,” Brother Beaudry says.

He joined Maryknoll in 1982, and was assigned to Kenya, where he learned Swahili and did pastoral work. Later, after earning a degree in community and human services from Empire State College in the United States, he returned to Kenya and in the city of Mombasa founded  “The Grandsons of Abraham,” a rescue shelter to get children and teenagers off the streets and back into their homes and schools. In 2003, Brother Beaudry moved to northern Namibia, where he continued to work with youth. 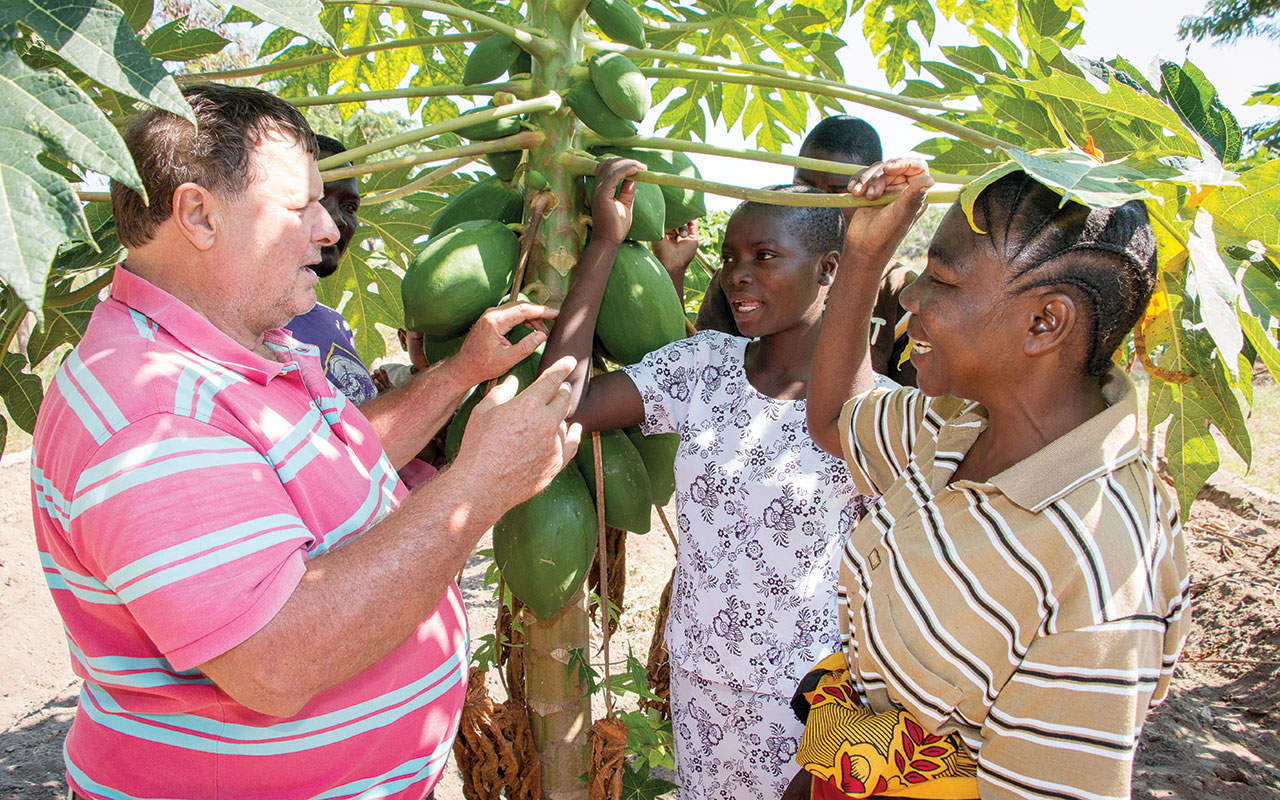 Brother Beaudry explains the benefits of newly planted papaya trees in the garden at the Bukumbi center that is part of a project to supplement the patients’ nutrition.

“When a priest comes, he gets involved in the parish, the sacramental part. As a Brother you need to see where you fit in,” he says. Ministries to the youth and the elderly always are needed, he adds.

Since 2010, he has served in Tanzania, where he ministers at Transfiguration Church, a vibrant parish in Mabatini founded by the Maryknoll Fathers and Brothers. He and parishioner Marygoreth Gervase are walezi or advisers to the youth group. Brother Loren also organizes activities for the parish’s senior citizens including bingo, excursions and seminars.

Natalia Kadio, who works at Transfiguration parish, says she admires Brother Beaudry’s dedication to the youth, the elderly and those with learning disabilities. “He really has a compassionate heart,” she says. “He has a heart for helping people who are completely desperate.”

Keeping in mind Jesus’ call to serve the outcast, Brother Beaudry has made his latest endeavor to help alleviate the growing problem of homelessness in Mwanza City, the second-largest city in Tanzania.

He explains that when he goes to the city, he sees more and more children, elderly and people who are sick begging for money.

Often poverty, inability to pay school fees, family conflicts, death of parents, or the desire to make money in big cities to send back home pushes children to the streets, he adds. According to a non-profit organization that works in the area, there were about 1,500 children and youth living and working on the streets of Mwanza in 2013.

Brother Beaudry hopes to bring together the local government, Christian churches, Muslim mosques and Mwanza’s businesses to discuss how to help the homeless population. It might take some trial and error, he says, but together they can address the root causes of this problem and find long-lasting solutions.

Communities coming together to help the poor would be putting the Gospel into action, he says.

Featured Image: Brother Beaudry hugs Thomas Luchagula at the Bukumbi rehabilitation center, as Metusela Jacobo looks on. The missioner has volunteered at the center for over five years.

Nile Sprague, a freelance photographer based in California, also did reporting for this story.