For most Westerners, a “cricket” is an insect known for its nocturnal chirping. In Cambodia, the insect—deep fried in garlic and chillies, rich in protein and fiber—is a popular snack food or side dish eaten with a cold beer. Leap Chantheoun, a 40-year-old mother of three, raises edible crickets for a living. That’s why she is called “cricket lady.” In a good month she and her husband, Keo Mony, can earn as much as $1,000. But it was a long and difficult road for Chantheoun, who is HIV-positive.

“I’m not sure when I first got infected, but it must have been many years ago,” she says. “I probably got HIV from my first husband. I became very depressed and ashamed. We had two children, but we divorced. I left the children with their grandmother and moved to Phnom Penh to work in a garment factory. The pay was just $2 a day, and I barely made ends meet. I got weaker and did not know what to do.” Then, she says, in 2010 she heard about the Maryknoll Seedling of Hope Program, a multifaceted program for people affected by HIV/AIDS, and was able to start antiretroviral (ARV) drug treatment.

“Soon, I got much better and healthier,” she says. “Maryknoll also helped me with a small grant to start a business.  At first I opened a small shop in my house and started selling different kinds of things that people need everyday. I also received a house from Habitat for Humanity through their partnership with Seedling of Hope to provide housing to people living with HIV/AIDS.”

When asked how she got started with the crickets, she says, “My uncle was already raising crickets, and that inspired me. Then I started raising crickets inside my house. I was successful and later I added an additional room.” 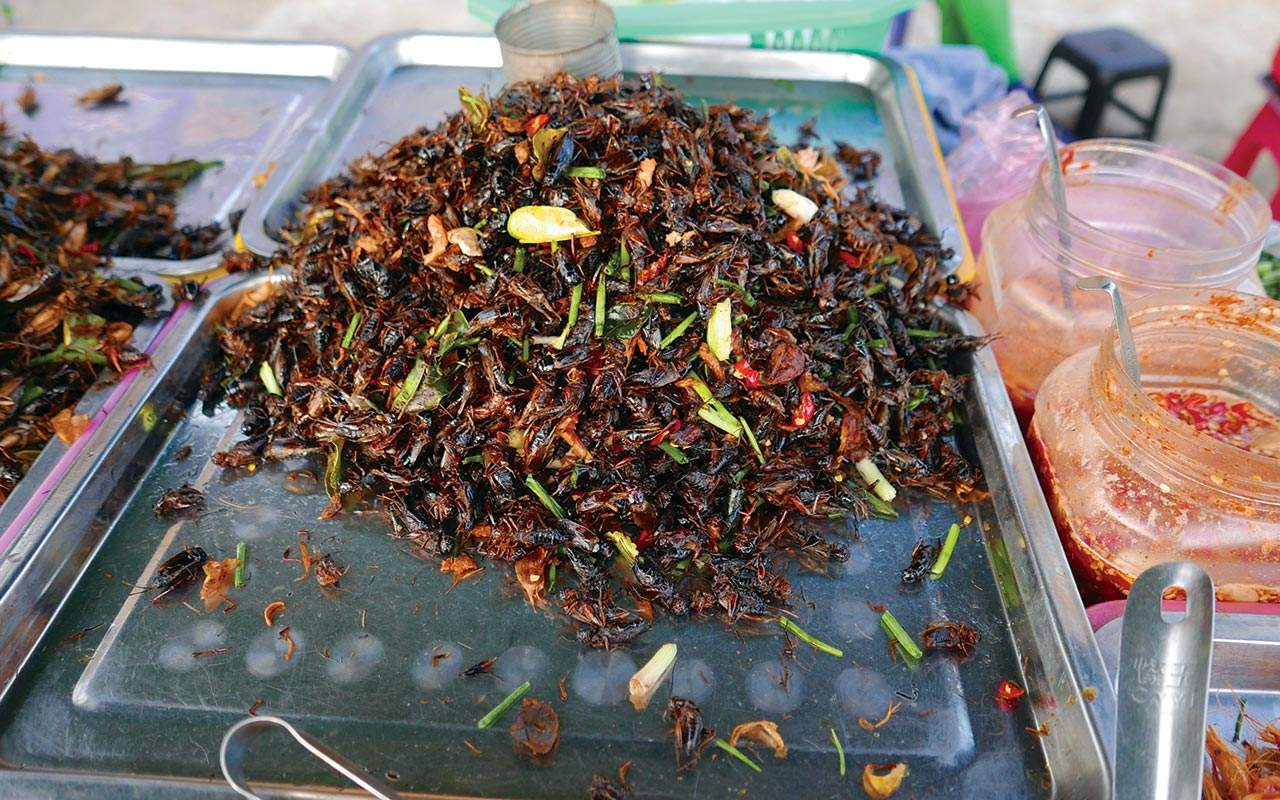 Harvested and boiled, crickets become a popular snack or side dish in Cambodia.

During a recent visit, we saw the insects reared in several wooden crates, each housing the crickets at different stages—from eggs to adult chirpers. Keo Mony sprayed water in a fine mist and kept feeding the developing insects with a steady supply of leaves. The crickets are mature in 30 days, after which they are “harvested” and boiled, ready for the market.

The couple have a healthy baby girl, who is HIV-negative, like her father. This is one of the many successes of HIV prevention: stopping perinatal transmission.  With information and education provided by the staff of Seedling of Hope, sero-discordant couples (couples where one partner is HIV-positive) are aware of how they can prevent HIV through safer sex behaviors. Should they desire a pregnancy, the risks of transmission to the child of up to 45 percent are brought down to less than 5 percent through the use of ARVs during pregnancy and delivery. Furthermore, because Chantheoun has been taking ARVs for many years, the levels of HIV in her blood are almost undetectable, and this further lowers the risks of transmission.

There are other ways to further reduce HIV transmission to the baby, through guidelines provided by the World Health Organization and the Health Ministry, such as safe delivery practices and recommended infant feeding practices, usually with a bottle of formula rather than breastfeeding. 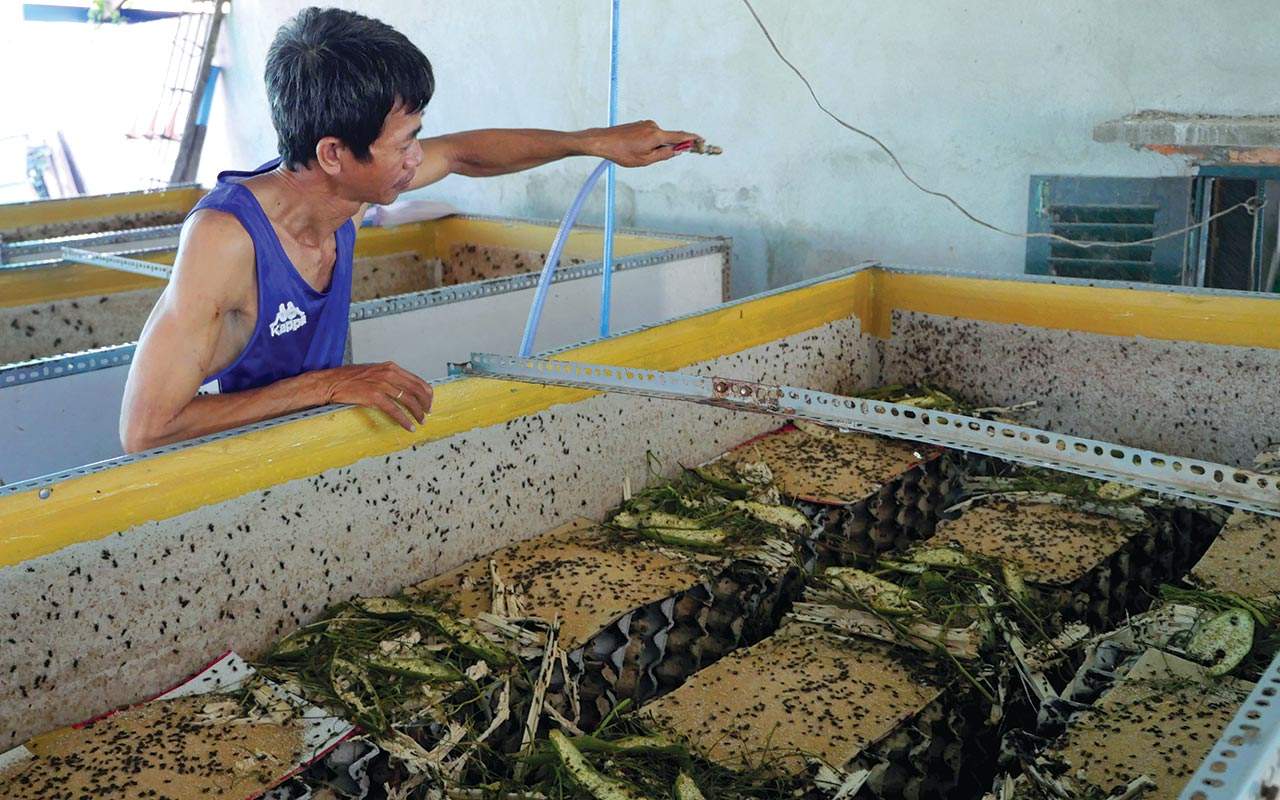 Keo Mony waters crickets as they grow at different stages in wooden crates.

Having visited Cambodia several times over the last 25 years, this writer remembers how bad things were before ARVs were readily available. Seedling of Hope had a hospice for the destitute dying from AIDS. It was filled with emaciated people, many of whom were fading fast, to the horror of their loved ones sitting tearfully at the bedside. They left orphans, with or without HIV, leading to huge societal problems. Maryknoll stepped in with various programs to help. About 15 years ago, generic ARV drugs became affordable and more accessible. People who had been dying of a deadly, incurable disease suddenly started to survive and lead normal lives. The shame and stigma of AIDS began to disappear and the whole vocabulary changed. No longer were they “suffering victims dying of AIDS,” but rather “people living with HIV/AIDS.”

Along with widespread use of ARV drugs, education and information about the disease became commonplace in Cambodia, as elsewhere, and people started to practice safer sex or abstinence, thus reducing transmission rates overall. In

20 years the percent of the population with HIV/AIDS has fallen fivefold, from almost 2.7 percent, to 0.5 percent. The Seedling of Hope hospice that opened in 2000 was thankfully closed in 2010 for lack of clients!

People in their prime are not dying of AIDS anymore, but living normal, productive lives, like “cricket lady.” She is one of more than 2,000 people living with AIDS who have been helped by Seedling of Hope over the past 20 years. Not only is she a successful businesswoman, thanks to Seedling’s livelihood grant, but she is also a healthy, attractive woman married to a man who from the start had not been deterred by her HIV status. They remain a healthy, happy and loving family, with a vision of hope for the future. And there will always be a demand for deep fried crickets in Cambodia!