Emelita “Emily” Valdez is building communities in Myanmar in more ways than one. As a member of the Philippine Catholic Lay Mission (PCLM), she is not only organizing basic ecclesial communities (BECs) where people meet to share their faith but also helping them develop skills and projects to work together to support themselves and their families.

Having worked in her native Philippines for a chemical company, where she trained clients to produce household products and market them, Valdez combines her business acumen and religious roots in her ministry in Shwe Pyi Thar, an industrial area in Yangon, Myanmar’s largest city.

“Everything relies on the Word of God. Prayer and Bible sharing and income-generating projects go hand in hand,” she says, referring to her holistic approach to leadership training and faith formation in the small Christian communities she is helping to get started in Shwe Pyi Thar.

In St. Gemma Galgani parish, for instance, with the support of Dominican Father George Phe Mang, the pastor, Valdez has established a BEC whose members meet regularly for prayer as well as income-generating activities such as soap and candle making. 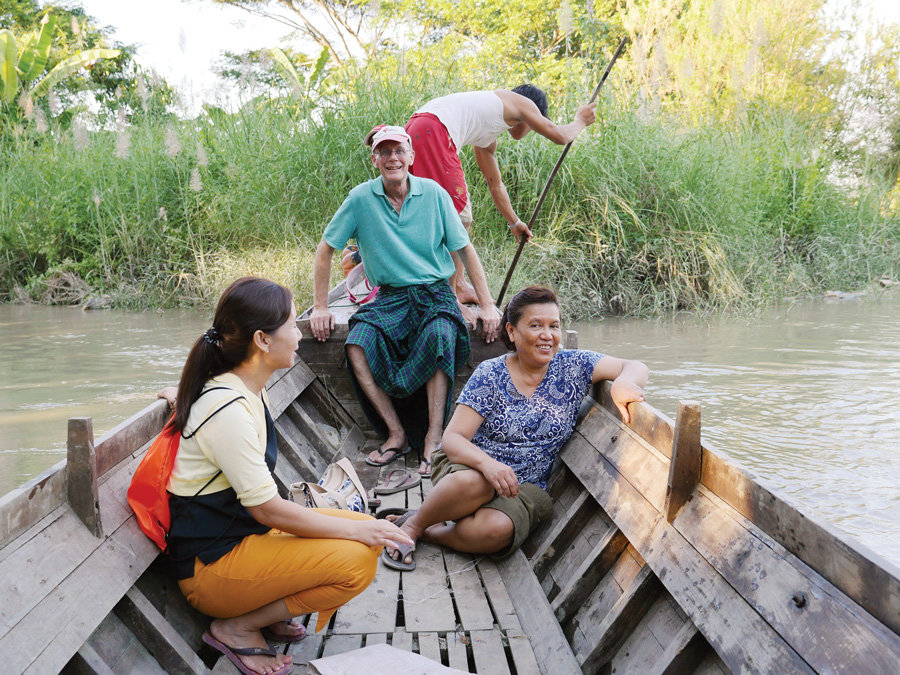 Father James Kofski (in green shirt, above), Valdez (r.) and her assistant Angela
return to Yangon from a visit to Khun Thar Yar village; (at right) children from remote
villages who live at a boarding house that Valdez assists attend local schools. 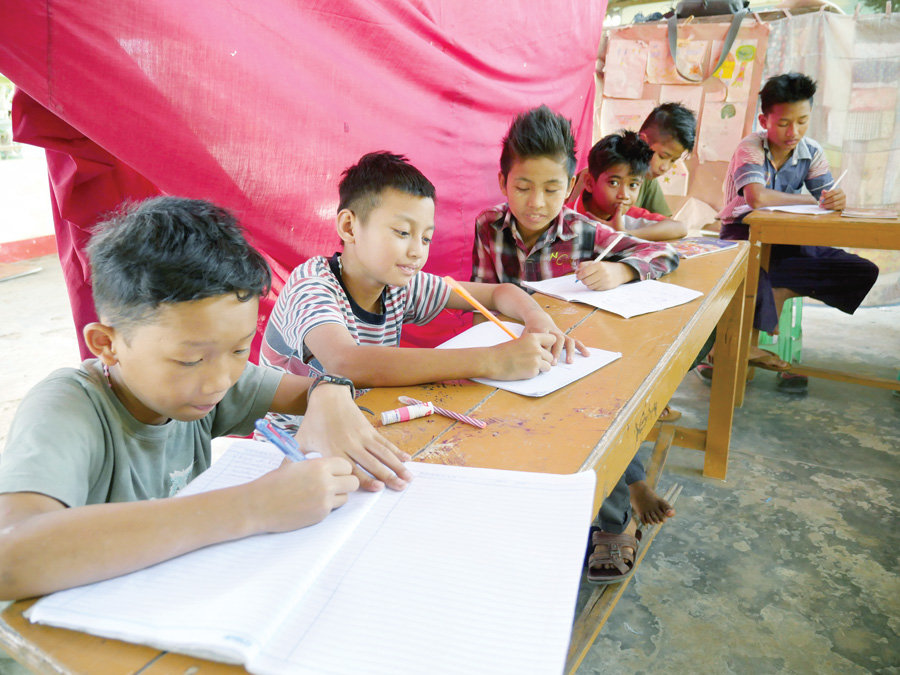 Children from remote
villages who live at a boarding house that Valdez assists attend local schools.

In the village of Khun Thar Yar, on the outskirts of Shwe Pyi Thar, she started a BEC that has become a magnet for interreligious activity. “We visit house to house, and we pray and sing together,” she says of the BEC that started with 11 Catholic members. “In a Buddhist-majority environment, this can be a powerful witness to our faith.” She reports that many of the Buddhist villagers who began sharing a meal and meeting with their Catholic neighbors now participate in prayer and Bible sharing with them. And with her help, Catholics and Buddhists are also working together to provide lunch twice a month to 150 children in this village that has a primary school but no medical clinic.

To help alleviate poverty in Khun Thar Yar, where the people depend mainly on seasonal crops for their livelihood, Valdez started a store owned by the BEC members, with shared responsibility and shared profit. The store offers staples such as rice, cooking oil, candles, petrol and fertilizer at lower prices than commercial stores. Both Catholic and Buddhist villagers may purchase items on credit, and repay their debt a month later at low interest.

The BEC has also brought intangible benefits, says Edward Aung Win Sein, community prayer leader in Khun Thar Yar. He feels it is a privilege for members to gather for Bible sharing and open discussion of local problems.

“We gain self-confidence and self-esteem as we discuss village problems with our Buddhist leaders and neighbors,” says the 54-year-old father of eight. “We feel a community spirit, and we are able to help solve each other’s problems in solidarity.” 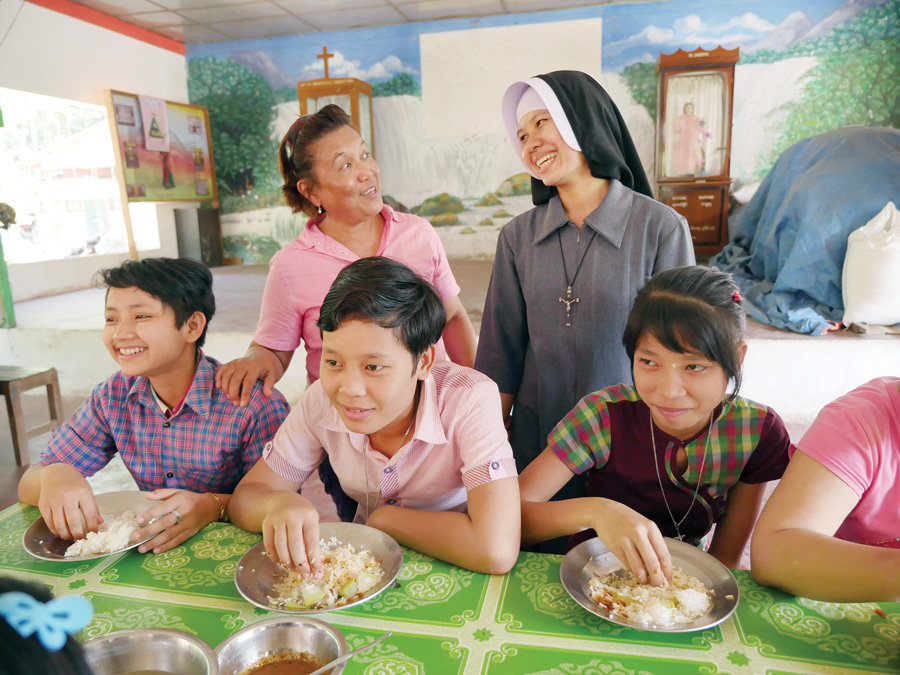 Valdez confers with Sister Mi Mi, a Sister of St. Francis Xavier who runs a boarding
house that Maryknoll supports for children from villages to live and go to school.

Valdez is gratified. Her own interest in social issues and interreligious fellowship developed early.

“I come from a long line of Evangelicals, including pastors who were socially involved,” she says. “My father was a Catholic, and my mother and four siblings—all girls—became Catholic, too. I grew up in an environment where Protestants and Catholics worked and prayed together.”

As a student at Western Mindanao State University in Zamboanga City, she says, “I became increasingly engaged with the catechism and social transformation. I was so active in social and political issues that I was put under surveillance.”

During the military dictatorship of Ferdinand Marcos in the 1980s, Valdez conducted seminars in her homeland on developing social awareness, organizing farmers’ cooperatives and documenting human rights abuses. “When I was giving my seminars, I was picked up by the military three or four times and held for a day or so before being released,” she recalls.

She later worked in municipal planning and development in Zamboanga del Sur but continued giving leadership seminars and organizing basic ecclesial communities. At the urging of the late Bishop Federico O. Escaler, she left her government job and joined the PCLM, a lay mission organization that was founded in the Philippines by the Maryknoll Fathers and Brothers to foster the growth of small Christian communities in the Philippines and beyond. On a scholarship from the East Asian Pastoral Institute at the University of Manila, she earned a master’s degree in pastoral studies.

Later she decided to leave pastoral work to experience the business world, where she enjoyed success. “But I felt empty and unhappy with my life; something was missing,” she says. “I thought again of renewing my commitment to PCLM, and I felt strongly the desire for mission abroad. I told the PCLM I would be interested if there were a vacancy abroad.” A month later she was in Myanmar.

Valdez says she is sustained in her mission by daily prayer. When she was discerning whether to go overseas with the PCLM, she began praying: “Lord, guide me. I cannot do anything without you. I am your instrument.”

“This is still my prayer,” she says.