A Maryknoll priest draws on his farmland upbringing to fight global hunger.

For most of his mission career, Maryknoll Father Kenneth Thesing has grappled with the specter of hunger. Assigned to East Africa as a young priest in 1972, the missioner has seen firsthand the ravages of drought and famine in a part of the world known for shortages of food and water.

Father Thesing grew up on a farm in Winona, Minn., and his family still cultivates the soil and raises livestock in the Midwest. Over his lifetime he has witnessed the transformation of U.S. agriculture in the 20th century from family farms to huge agribusinesses. Yet, as a missioner he has walked the savanna of Tanzania with subsistence farmers who could barely eek out enough to feed their families.

Today, as an adviser to the United Nation’s Food and Agriculture Organization in Rome, Father Thesing, 74, draws on his understanding of those two extremes—the industrial agriculture model of farming and the plight of the rural poor in developing countries—in working to reduce hunger and malnutrition around the world.

“Hunger is a function of poverty,” says Father Thesing, who works with the International Congregations of Religious to provide input into FAO policies and help implement them on the local level. “People are hungry for the most part because they are poor. It is not for a lack of food production.”

The world produces more than enough food to feed the planet’s 7.3 billion people, he says. “Enough food is produced to feed 10 billion people,” he says. Sadly, he adds, as much as 40 percent of the food produced globally rots before it can get to hungry mouths. 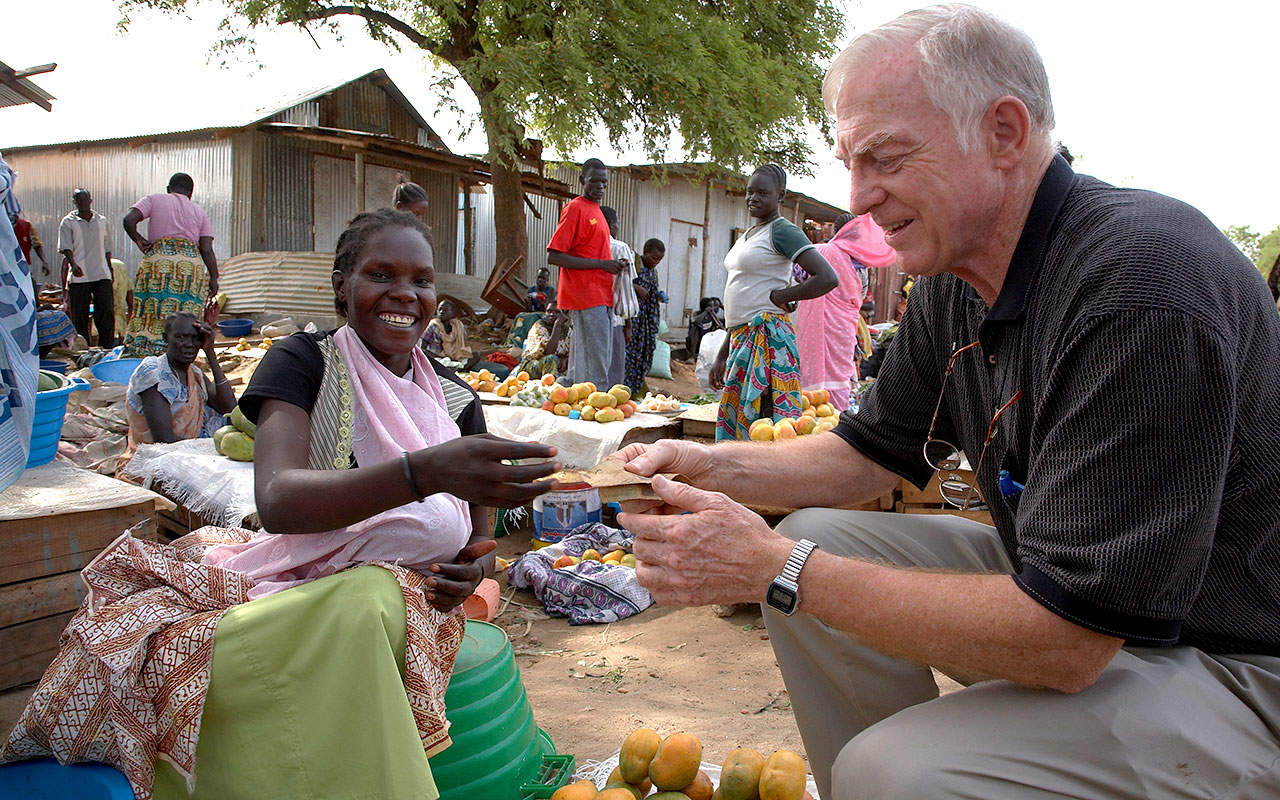 Maryknoll Father Kenneth Thesing purchases food in a market in Juba, the capital of South Sudan, where he worked with the Jesuit Refugee Service for three years.

Key to eliminating hunger, says Father Thesing, is sustainable and resilient food systems—with an emphasis on the plural: more than one system. In the world of food production one size does not fit all, he says.

“We only think of the agriculture industrial system because that’s what we know, but 70 percent of the food that’s consumed in the world is produced by small-scale farmers,” says Father Thesing, who as a young missioner in Tanzania ran an agriculture program for the Shinyanga Diocese. He says the preferred term in agriculture these days is food producers and that includes farmers, fisher folk, forestry dwellers and people who raise livestock.

Ironically, the very people who are small-scale farmers are also among the most vulnerable to hunger, the missioner says. They’re dependent on the vicissitudes of weather and markets and are often cash poor.

“This is the basic question: What is the model of agriculture that is going to serve on into the future?” asks Father Thesing. For many people, that question boils down to one of two choices: industrial agriculture or agroecology.

Agroecology is akin to organic agriculture, Father Thesing says. It’s an integrated system similar to what he grew up with on his father’s farm in Minnesota.

“We had cows and pigs and chickens, so we had our own manure and we had alfalfa that we plowed down,” he says. “We had an integrated system, animal and crops, natural manures for fertilizers as well as supplementing it with fertilizer.”

All that has changed from the 1950s and 1960s. “Now my brother, for example, has nothing but artificial fertilizers because there are no animals left on the farm,” Father Thesing says. “That’s a result of our food system and the development of our agricultural system.” 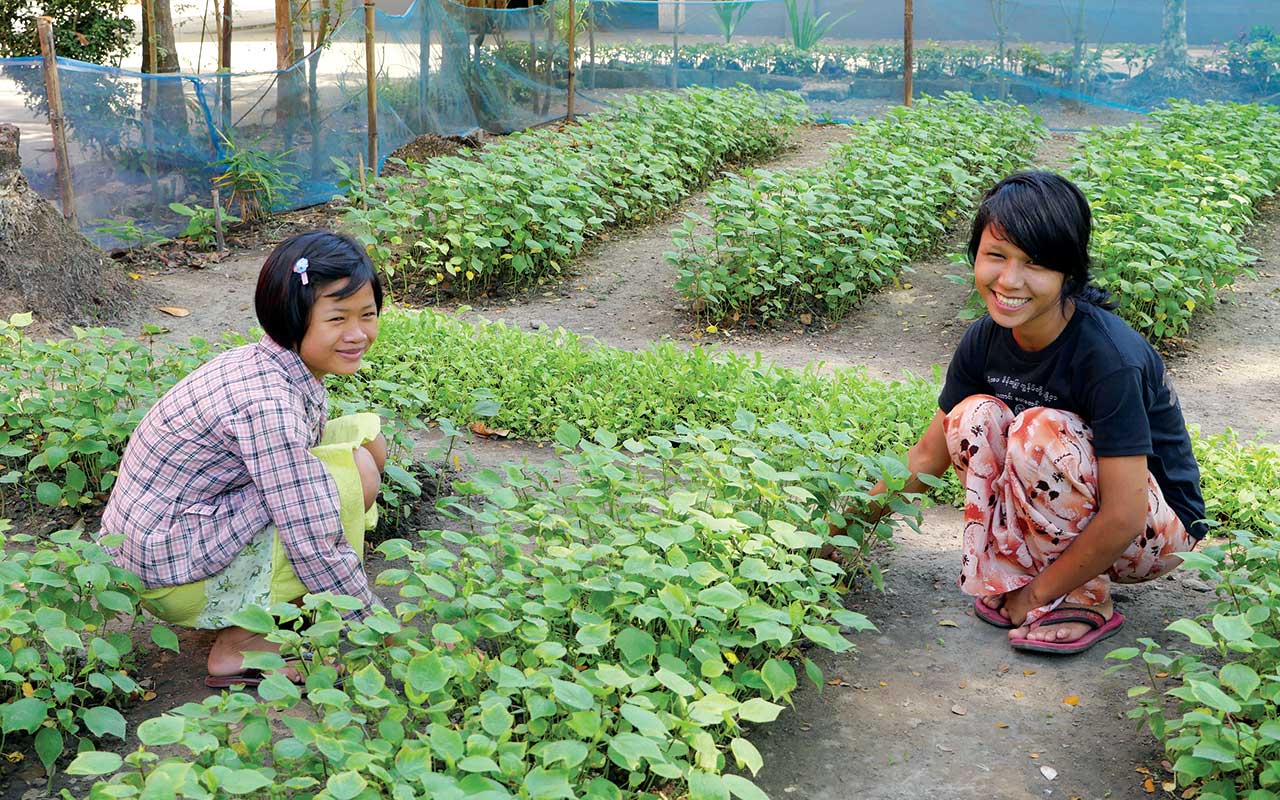 Industrialized countries tend to talk about agribusiness and use terms like industrial agriculture, Father Thesing says. This is the dominant model in the United States and Canada and other major food exporting countries. It involves large-scale farming and monoculture planting using hybrid and genetically modified seeds and chemical fertilizers, herbicides and pesticides.

Almost by definition, he says, agribusiness and industrial agriculture are controlled by international agriculture corporations. At the very least, he says, it’s “a high financial input model,” which means, it’s expensive, requiring large cash outlays annually for the seed, fertilizer, herbicides and pesticides.

For many observers, that agribusiness model—vast expanses of crops growing in countries with rich fertile plains like the United States—is the future, a world in which the bread basket nations feed the world’s hungry. That system has made the family farm virtually anachronistic in much of this country, yet for good or bad is feeding our nation, the missioner says.

Whether that system can feed the world, though, is very much disputed, especially after the world food crisis of 2007–2008 and Russia’s temporary ban on wheat exports in 2010 following a drought that devastated its grain production that year. Russia’s ban on wheat exports sent shockwaves through countries dependent on such exports, Father Thesing notes.

These kinds of issues are playing now into this question of food security, he says. For some countries, the wheat ban raised a frightening issue, he says: “If we’ve reached the stage where major players will do something like this, what’s to protect us?” 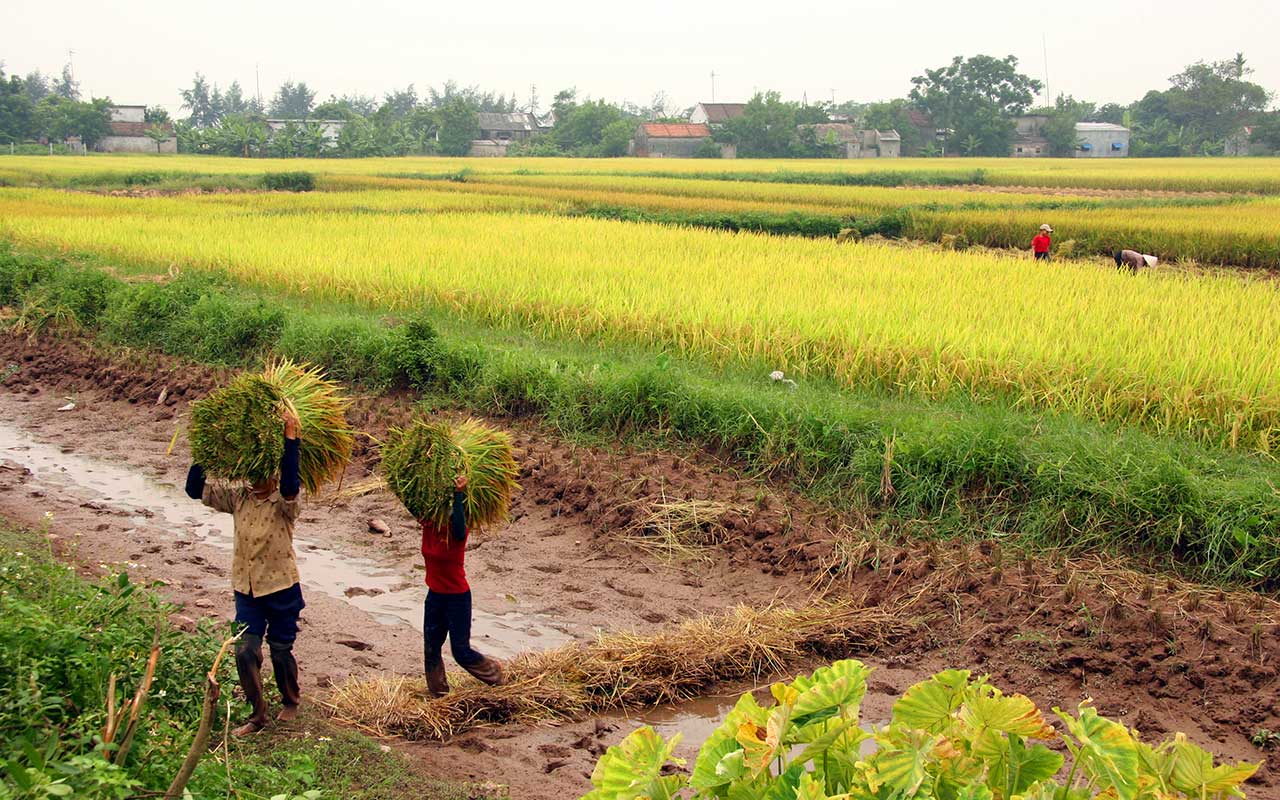 Women harvest rice in a field outside Hanoi, the capital of Vietnam.

The food crisis helped give impetus to the agroecology movement, which emphasizes local control of food production as well as use of natural local inputs and resources. The FAO does not favor agroecology over agribusiness or vice versa, says Father Thesing, but supports both systems. In 2014 FAO sponsored a symposium on agroecology and last year held one on agriculture biotechnologies.

“In FAO the most important principle is food security, which means adequate food of good nutritional quality, culturally sensitive to what people like in different areas and cultures around the world,” Father Thesing says. Another priority, he says, is people having control over their food supply, which is essential for food security.

With that in mind, the Maryknoller has become an advocate for the U.N.’s Zero Hunger Challenge, an initiative launched in 2012 by U.N. Secretary General Ban Ki-moon that seeks to establish access to food as a human right and to build sustainable food and agriculture systems. The goal of the challenge, which is part of the U.N.’s Sustainable Development Goals, seeks “measurable progress in ending hunger and malnutrition and creating inclusive, sustainable and resilient food systems by 2030,” according to the U.N.

Most countries in the world can produce enough food to feed their populations, Father Thesing says, and while only about 1 percent of the U.S. population makes a living from agriculture, worldwide as many as 3.5 billion people are engaged in agriculture. That’s almost half the world’s population.

With his feet figuratively planted in both the industrialized agriculture of the developed world and the traditional farming of the underdeveloped world, Father Thesing understandably see the issues of food and food security from both sides. He sees the benefits of both, and the dangers of both. He worries, for example, about a few massive multinational corporations, such as the Monsanto Company, controlling the world’s supply of seeds, and, on the other hand, he has seen local farmers destroy good land in a few decades by poor management, clearing and overgrazing, leaving once productive soil depleted.

“So you’ve got these two polls,” Father Thesing says. “The answer of the industrialized world and agribusiness is we can somehow produce our way out of hunger. The other says, ‘No, we need to have much more control in the hands of the people who are actually working the land so that they have a sense of dignity in producing the food for their families and more for others.’ ”

Hunger is deeply related to the issues of land and labor, and to the need for people to come together for global solutions, he says. It is the poor who are hungry, he adds emphatically.

“For us as Christians, as Catholics, it is a moral question,” he says, “and an ethical question because we start by saying each person has the dignity of being created equally by God.”