If the values of the students in Father James Kofski’s English language classes are typical, the future of Myanmar looks bright.

“They invariably tell me they are studying English to find a good job, to earn enough money to provide for their family, to do something for their country and to care for their parents when they are old,” the Maryknoll missioner says.

Father Kofski, who for the past seven years has been doing pastoral ministry and teaching in Yangon, works with his students individually on their speaking and writing skills. Ordained in 1991, the native of Minneapolis, Minnesota, honed his professional skills in journalism for 10 years before entering the Maryknoll Fathers and Brothers.

The La Salle English Centre, where Father Kofski teaches, challenges its students to develop critical thinking—an essential skill in Myanmar’s newly emerging democracy—as they wrestle with material varying from “Hamlet” to “A Christmas Carol” and even to the ill-fated flight of Icarus in Greek mythology. 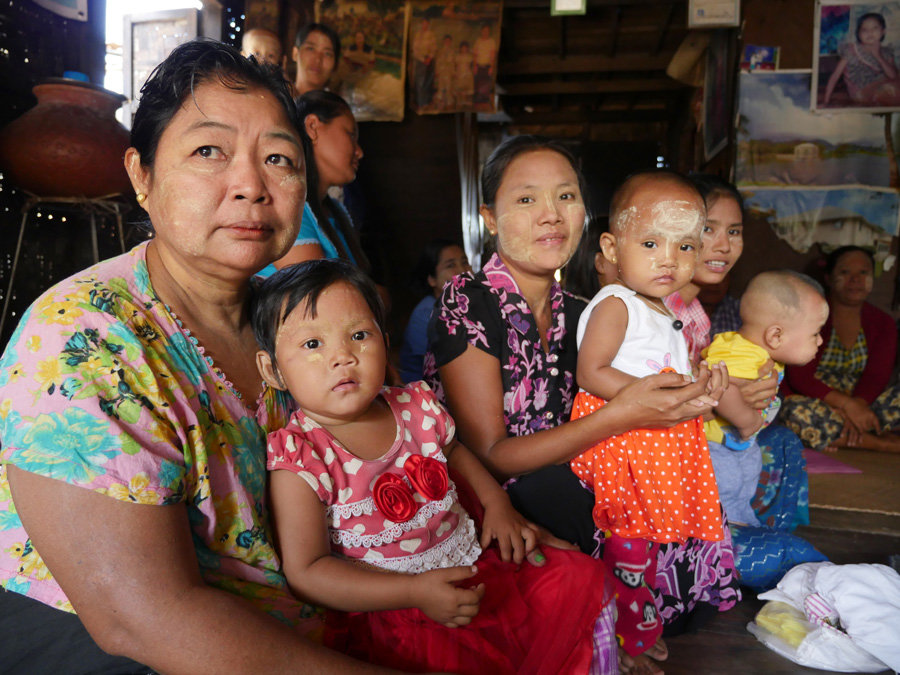 Mothers with infants and toddlers crowd into a house in Hlaing Tharyar shantytown of Yangon for health check-ups as part of a Maryknoll-sponsored program.

Father Kofsi sees his role as a teacher in Myanmar as integral to his vocation as a Maryknoll missioner. “We can’t always evangelize directly,” he says. “But we also preach when we share our gifts with others and help them discover their own.”

La Salle student Thi Han Aung, 18, says he moved to Yangon from southern Shan State to improve his English. “It is a special privilege for me to have one-on-one discussions with a native speaker,” he says.

Another student, 23-year-old Julia Bawk Myaw, says Myanmar is opening up to the outside world after decades of isolation and new opportunities are emerging. “We can’t carry on communication with foreign companies if we don’t learn English,” says Bawk Myaw of Kachin State. “Opportunities lie ahead for young people with foreign investments coming in, such as in telecommunication, but we need to be professionals.”

Increasingly informed by the Internet and the foreign media, students in Myanmar, formerly Burma, are growing up in a society slowly emerging from the closed military dictatorship imposed in 1962 by General Ne Win.

Voters in general elections in November 2015 overwhelmingly elected the opposition National League for Democracy, led by Nobel Peace Prize winner Aung San Suu Kyi. The party garnered more than 80 percent of the vote and obtained a supermajority in the national parliament. Aung San Suu Kyi, who is barred from holding the presidency, ostensibly because her late husband and her two children are British citizens, is the country’s de-facto leader and holds the posts of foreign minister and state counselor, a position similar to prime minister. 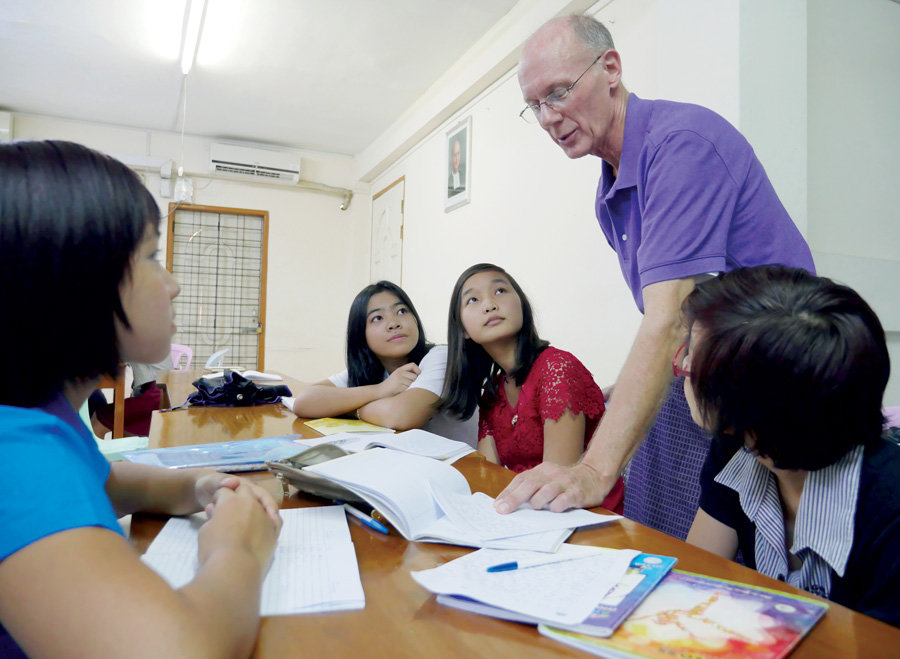 Father Kofski checks work of students at the La Salle English Center in Yangon, where he seeks to challenge young people to develop critical thinking skills.

“The need for quality education, health care and economic opportunity will remain a challenge despite the changes in Myanmar,” says Father Kofski, 70, who besides teaching there is administrator for various projects funded by the Maryknoll Fathers and Brothers, ranging from education, nutrition and leadership training to assistance for people with HIV/AIDS.

Father Kofski also assists Father Marcian Thet Kyaw, pastor of Yangon’s Epiphany Church. Father Marcian says missionaries to Myanmar are not only a help to the local Church but can help build a missionary spirit among the laypeople.

The Catholic Church in Myanmar has about a half million congregants, making up barely 1 percent of the country’s 51 million people, 89 percent of whom are Buddhist. In November 2014 the Church marked the 500th anniversary of Christianity in the country, and in February 2015 Archbishop Charles Bo of Yangon became the country’s first cardinal.

“There are many tasks to be carried out in Myanmar and missionaries can contribute,” Cardinal Bo says. “Foreign missionaries such as Maryknollers can play a role in empowering the missionary spirit among laypeople so that they carry on the work of proclaiming the Good News to their neighbors.”

The prelate noted the importance of the work missionaries such as Father Kofski do in helping to upgrade the quality of education and provide needed health care for people.

Maryknoll missioners have been working with the people of Myanmar since the early 1990s, starting with helping Burmese refugees in Thailand fleeing political violence. In 2006, Maryknoll missioners from all branches of the movement—priests, Sisters, Brothers, lay missioners and short-term volunteers—began sending people into Myanmar, although they were forced to regularly go in and out of the country on visas issued only for a month or two at a time. Father Kofski began living and serving in Myanmar in 2009 as the government became more open to foreign residents. Currently, Maryknoll Sister Mary Grenough is also assigned to Myanmar and works in AIDS/HIV ministry. 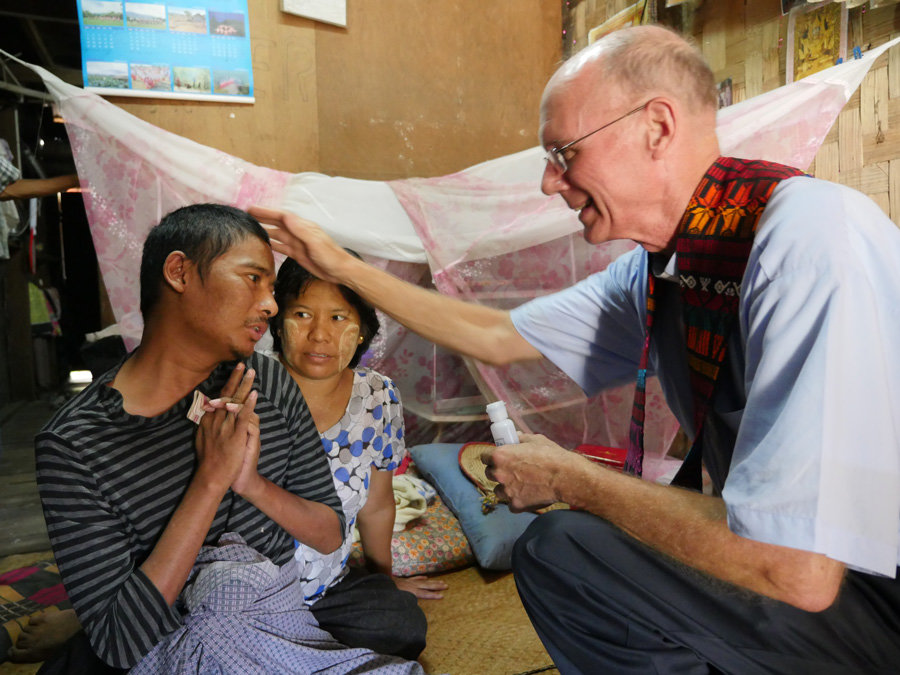 Father Kofski blesses a 34 year-old man who is suffering from advanced AIDS and is cared for by his sister in a crowded shantytown area of Hlaing Tharyar in Yangon.

Father Kofski says that while the number of Catholics in Myanmar is small, he finds the people’s public display of faith impressive, such as popular pilgrimages, Lenten observances and reaching out to the poor.

“Ten thousand pilgrims from all regions and religions of the country flock to Nyaungleben (about four hours from Yangon) every February to honor Our Lady of Lourdes,” Father Kofski says. “While religious leaders everywhere encourage interreligious dialogue, these people do it naturally—praying side by side in a dialogue of life.”

Growing up in a middle-class household in Minnesota, Father Kofski credits his parents for his faith foundation. He graduated from the University of Minnesota with a degree in journalism and worked for The Associated Press wire service after serving with the Peace Corps for two years as an elementary school teacher in the Philippines.

That experience and a continuing desire to serve those in need in the developing world led him to enter the Maryknoll seminary in 1984 at the age of 38. He was ordained in 1991 and served in Egypt for five years and another five years in Jerusalem.

“Learning new cultures and carrying on interreligious dialogue in a poor Muslim country is a tremendous experience,” Father Kofski says. “It is really rewarding, especially to be invited for evening meals during Ramadan.”

Father Kofski’s students in Myanmar are hopeful about the future of their country with the return of democracy after 50 years of military rule, but they are realistic about the problems the country still faces. 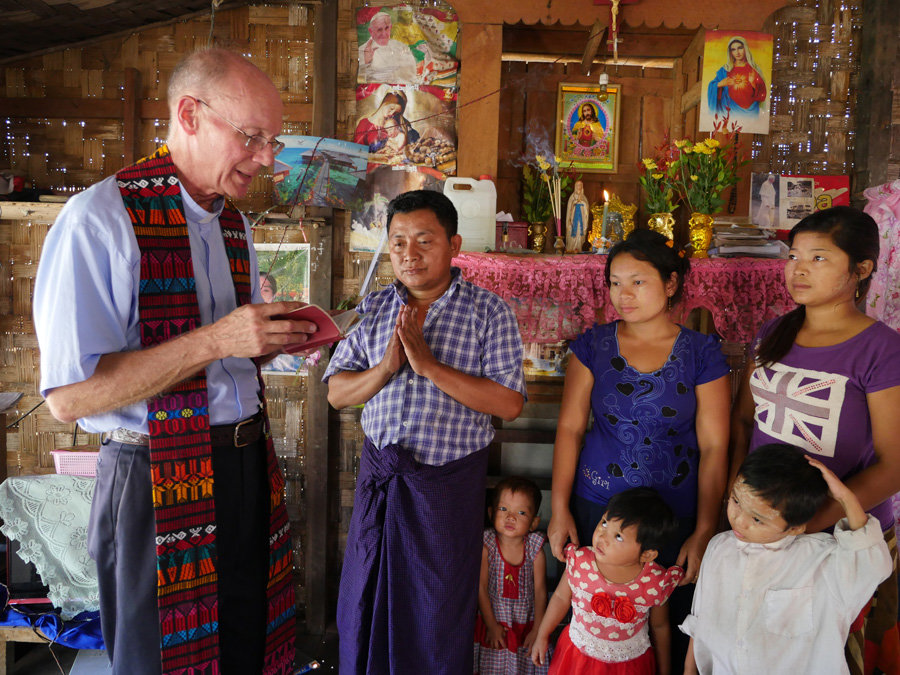 Father James Kofski blesses a Catholic household in the Hlaing Tharyar shantytown of Yangon, where families such as this one relocated after Cyclone Nargis.

“Discrimination and human rights violations still persist in ethnic areas, so I have a lot of concern about it despite changes in the country,” says Bawk Myaw. In Bawk Myaw’s native Kachin State more than 100,000 Kachin civilians have been displaced since renewed fighting between the military and Kachin rebels in 2011 following the breakdown of a ceasefire agreement.

And Thi Han Aung says that even as opportunities emerge in the new openness of Myanmar, new problems arise as well, such as increased drug use among the country’s young people.

“We can easily get drugs in the cities, so it is a hindrance for our futures,” Thi Han Aung says.

Still, Father Kofski has faith in Myanmar and its people, from the younger generation’s continued focus on the family to the older generation’s praying side by side regardless of faith tradition. With a new majority party poised to better articulate people’s desires, the time seems ripe for change.

John Zaw is chief correspondent in Myanmar for the Union of Catholic Asian News (UCAN), a Maryknoll-supported ministry that provides news, features and multimedia content on social, political and religious developments of interest to the Catholic Church in Asia.