Maryknoll Brother recounts his missionary life as he prays for vocations

Maryknoll Brother Andrew Marsolek is thrilled to invite me to his small room at the Maryknoll Society’s headquarters to show me some of his most prized possessions: fishing rods, antlers hanging on the wall of deer he hunted in his youth and hundreds of photographs that narrate his missionary life. They include a photo he took in 1970 when Bishop James Edward Walsh—one of four priests who pioneered Maryknoll’s first mission in China in 1918—returned to the United States after spending 12 years in a prison under the communist government of Mao Zedong.

“I am 79 going on 80. In my mind I feel like 30, but I have respect for my age, you know,” says Brother Andy, as he is called. He is delighted this is the first time a profile of his missionary life will be written for Maryknoll magazine, and he wants to share his legacy in the hope that young Catholics may discover what the vocation of a religious Brother is and go out to the world to serve as Maryknoll missioners.

The Maryknoll Society is experiencing a difficult time with regard to vocations to Brotherhood, Marsolek says. He is one of 40 Maryknoll Brothers, whose average age is 78 years.

Vocations to Brotherhood have also declined nationally. According to a report by the Center for Applied Research in the Apostolate, published two years ago, the number of religious Brothers in the United States decreased from 12,271 in 1965 to 4,318 in 2014.

Hopeful there will be a resurgence of such vocations, Brother Andy continues to live his calling, which focuses on prayer and work. “The most important moment of every day for me is to attend Mass,” says Brother Andy, who took his final oath as a Maryknoll Brother in 1969, committing himself to lifetime celibacy and obedience to the Society. 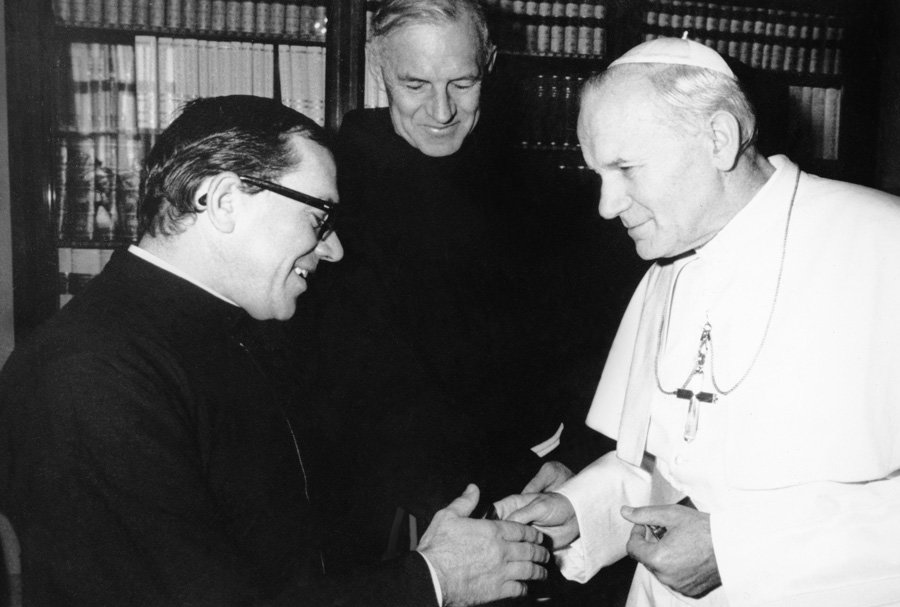 During a visit to Rome, Brother Andy is delighted to meet Pope John Paul II. (Courtesy of A. Marsolek)

Although he is officially retired, Brother Andy remains active as a missioner, mainly visiting the sick. Every Monday, he walks the halls of Phelps Memorial Hospital in Sleepy Hollow, N.Y., to pray with and bring the Eucharist to patients there. Every first Friday, he visits three homebound families.

He drives a small hybrid sedan that he got after years of saving the small monthly stipend he receives from the Maryknoll Society. “I’ve driven many old cars for many years, you know,” he says with a smile, “so now, I like this.”

Brother Marsolek also occupies his missionary days helping with pastoral work at St. Augustine’s Church in Ossining, N.Y.; contributing photographs to Maryknoll News, a newsletter for Society members; and taking photographs of events at Maryknoll. He is an active member of the American Legion and the Knights of Columbus. “Oh, and I go to the gym three times a week,” he says.

Andrew Marsolek, who was born on Oct. 27, 1936, in Independence, Wis., describes himself as a “third-generation Polish American, a boy who grew up without the presence of his father, a young man who served in the U.S. Navy and then dedicated his life in service as a Maryknoll Brother.”

He praises his brother Everett, 12 years his senior, as his father figure. “He enlisted in the Navy, so when I grew up, I also joined the Navy. He was a fisherman and I also became one,” says Brother Andy, whose parents separated when he was 6 years old. His mother had to work hard, says Andy, to support him and send him to Catholic school.

The Sisters of St. Joseph who taught at Saints Peter and Paul School, he says, encouraged his early interest in becoming a Brother, but when a friend shared the common misconception that Brothers only cleaned floors and did other household chores, the future Brother put his vocation on the back burner.

Picture taking became his avocation, beginning in high school, when he took the photos for his class’ yearbook. The skill proved useful when he served in the Navy, and when he joined Maryknoll. He worked in the Society’s photo lab and—after taking courses at the National Institute of Photography and the School of Visual Arts—he became one of the photographers for Maryknoll’s magazines.

Shortly after entering Maryknoll in 1960, he decided to reunite with his father. “My father and I forgave whatever happened; everything was repaired,” he says.

After he studied Spanish in Bolivia, Brother Andy began his mission assignment in 1973 in Mexico, in San Juan de Aragon, a poor area near the airport in Mexico City. There, he did pastoral work, was involved with the Christian Family Movement and coordinated the construction of a chapel in a nearby district that lacked pastoral services.

The friendships he forged, places he visited and blessings he received from the people during his 30 years of mission in Mexico are extensive. He proudly highlights that one of the altar boys from his parish, Gilberto Rodriguez Tapia, became a diocesan priest, and his brother Miguel became a doctor. Brother Andy fondly remembers a special outing to Acapulco that he organized and helped fund for poor families who had never had a vacation trip.

“When I was discerning my vocation as a missionary Brother, it was meaningful for me to know the story of Brother Andy,” says fellow Maryknoll Brother Wayne Fitzpatrick. “The Gospel values he learned in Wisconsin became significant as he approached mission. He became a brother to the people of Mexico.”

On Brother Andy’s 40th anniversary as a Maryknoll Brother, Moises Sandoval, founding editor of Revista Maryknoll, wrote about his friend: “He is a missioner of great energy and enthusiasm. His simplicity of character, genuineness and humility endear him to everyone. He never aspired for a high position in religious life. His only desire was and is to be a brother to everyone… Always gregarious and cheerful, he seems full of wonder at the good he sees in life and in people. The most common word in his vocabulary is ‘Wow!’.”