As the Maryknoll Lay Missioners’ longest serving missioner, Elizabeth Mach has had a powerful impact on tens of thousands of lives by answering God’s call to service.

Celebrating her 40th anniversary as a missioner this year, the Pine City, Minnesota, native began her mission career in 1976 in Tanzania, where after several assignments elsewhere she is back working today.

“I went for three years, and I am still there!” says Mach, who joined the Maryknoll Lay Missioners (MKLM) as a 23-year-old college graduate with a nursing degree from the College of St. Catherine (now St. Catherine University) in St. Paul. “God makes plans while we think we are making our life’s plans, and sometimes they are very different pathways,” she said.

In her four decades as a Maryknoll missioner, Mach, who goes by “Liz,” has worked in village clinics, taught in health centers and been a nurse in hospitals, while always maintaining her emphasis on service to the poorest and most marginalized. She has delivered babies in mud huts and in refugee camps and seen firsthand the devastating effects of obstetric fistula (a hole in the birth canal) and female genital mutilation (FGM) on a woman’s health. She understands the lack of control most of these women have over their reproductive lives and how that affects other health issues. She has made it her life’s work to advocate for those who face gender-based violence. 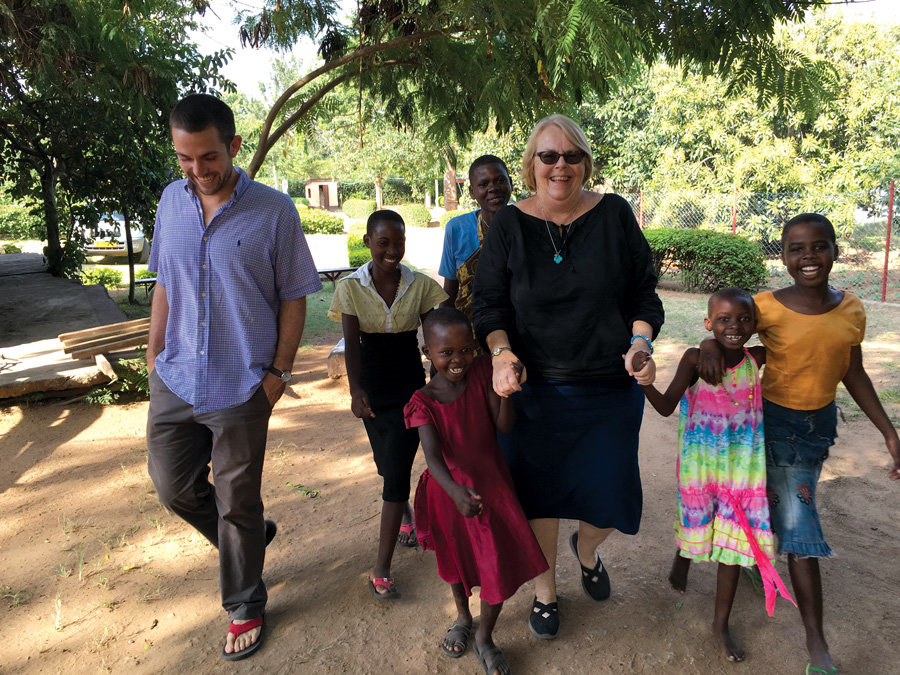 “I am privileged to see the faces of these young women we are protecting and the opportunities that they have to better their lives,” Mach says. “A smile says it all!”

After her first six years in Tanzania, Mach returned to the United States in 1982 and served in leadership and administrative roles for MKLM for a decade, during which time she also earned her master’s degree in public health from the University of Minnesota.

She returned to Africa in 1992 to work in Sudan, then in the midst of civil war between the fundamentalist Islamic government in the north and the Christians and animists in the south section, which eventually became the independent South Sudan.  Her three years in Sudan, where she was often forced to take refuge in bomb shelters during attacks by government aircraft, came to an end when the vehicle she was riding in was ambushed and she was seriously wounded.

“The shooting was such a near-death experience for me,” Mach said, “my faith really grew.” Knowing she could have died, Mach felt that God spared her for something greater. “That’s the basis of my faith right now,” she said after the attack, adding, “I’ve got a lot more to do.”

Since then, Mach has worked at the Maryknoll-founded Kowak Health Center in the Diocese of Musoma, and at the Bugando Hospital in the Diocese of Mwanza as a nurse and patient advocate. For the last several years, she has served in the Diocese of Musoma, working closely with Bishop Michael George Mabuga Msonganzila, helping coordinate health, education, communication and social services for the diocese. This work enables Mach to impact the diocesan outreach to the poor and vulnerable and to victims of human rights violations. Her advocacy and work for justice in the areas of health and education fit well with her passion for promoting the rights of women and girls. 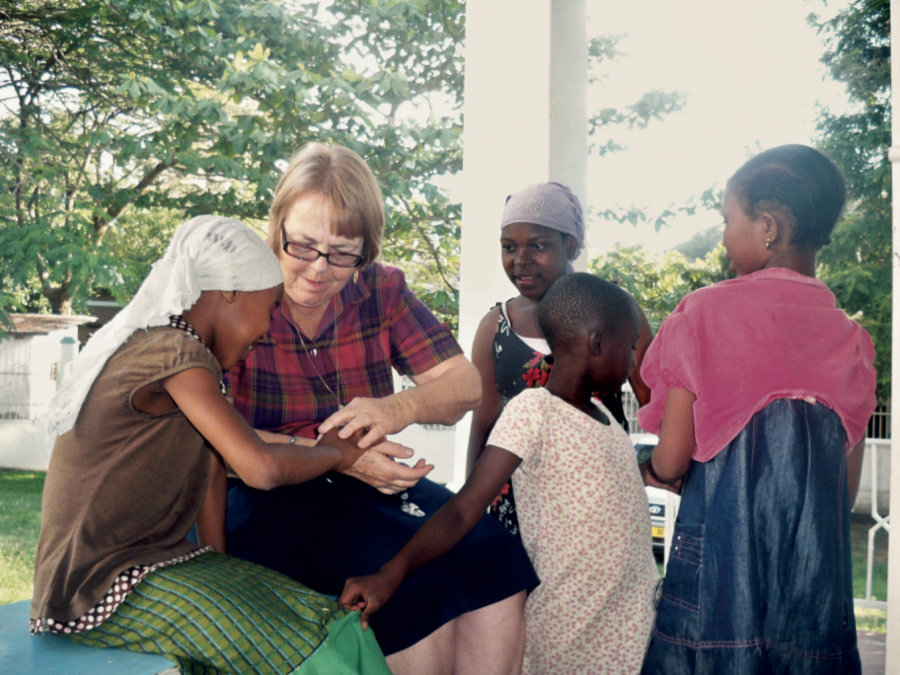 Mach engages with the Tanzanian people in her ministry to those most in need.

One of her highest priorities is helping women get access to treatment for obstetric fistula and working with young women who are running from genital mutilation, referred to locally as female circumcision or “cutting.” It is typically done on young women, usually by their relatives, as a preparation for marriage, mostly during November and December, the so-called “cutting season.”

“People will say that a woman cannot be married in her ethnic tradition if she is not circumcised,” says Mach.

In 2008, the Musoma Diocese began a program to protect girls during these months. The initial rescue camp at that time housed 53 girls, but by 2015 the diocese was protecting 650 girls with armed security.

Unfortunately, the number of families practicing FGM in the Mara region where Musoma is located is increasing, Mach says. At the same time she is seeing a growing awareness among young Tanzanians of the issues around FGM and arranged marriages involving girls as young as 14.

“We are recently seeing with youth an understanding and desire to marry whomever they choose,” she says. “This is why it is so important to have men and boys as part of our programs, as they help make the change. It really is about education for all. Once people understand the consequences of FGM and what it does negatively to a girl or woman’s life throughout her reproductive years, they are willing to make the changes needed.”

Tanzania still has one of the highest child marriage rates in the world, with four out of 10 girls marrying before the age of 18. Fifteen percent of the women and girls in Tanzania are forced to endure female genital mutilation, with this rate being 44 percent in the Mara region. 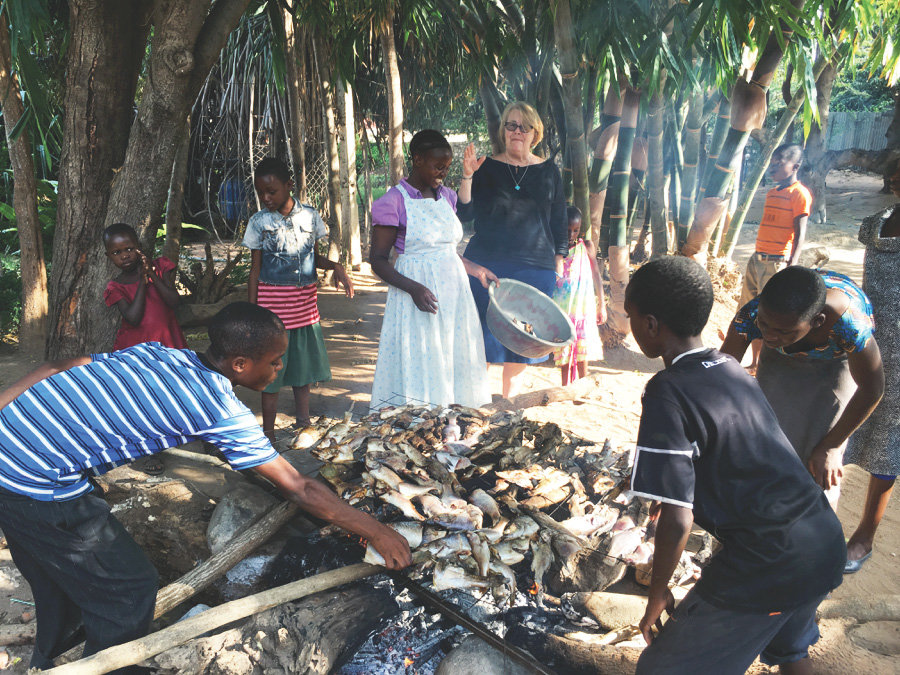 Mach engages with the Tanzanian people in her ministry.

For the past five years, Mach has overseen Jipe Moyo! (which means Give Heart!), a shelter offered through the Musoma Diocese and the Immaculate Heart Sisters, who staff the program, for girls running from any kind of gender-based violence including FGM, child marriages, domestic abuse and sex trafficking. Jipe Moyo! offers some 50 girls a year-round safe haven. Victims are welcomed to stay as long as needed. Mach is working to expand the shelter’s space to take in additional girls.

“We try to enroll the girls into schools, to get them into vocational school, or primary or secondary school, knowing that education is what is going to make the difference,” Mach says. “If we can get them educated, then we have a chance for them to have something to look forward to.”

Educating the local communities to raise awareness is an important aspect of the diocese’s effort, since police, family members, catechists and members of local religious congregations are often the individuals to identify situations of gender-based violence and bring girls who have been abused to Jipe Moyo!.

Mach helps coordinate and hold seminars on harmful traditional customs and is working to develop a legal counseling program and a remedial year for girls wanting to enter high school.

“Most of these children we will try to reintegrate, but we have some children here who were in child marriages or in some form of an abusive situation and we cannot return them to their homes,” Mach says. “They have to stay with us.”

A version of this article appeared in Voices of Compassion, which is a publication of the Maryknoll Lay Missioners.