Maryknoll Sisters sign a legal agreement to conserve a portion of their property, preserving its woods and wetlands.

In this centennial year of their founding, the Maryknoll Sisters are leaving an ecological gift for future generations. Through a legal agreement, or easement, the Sisters are preserving in perpetuity 42 acres of wetland and woodland area on their 67-acre center in New York.

“We are giving this land extra protection forever so that no major development will ever be allowed on it,” says Sister Doreen Longres, who co-directs the Maryknoll Sisters Environmental Office with Sister Janet Miller. The two Maryknoll Sisters have been working on the conservation easement since 2007. They and their congregation will join with friends, neighbors and local dignitaries on June 3 to celebrate the official designation of the conserved area.

Caring for the earth has long been a priority for the Maryknoll Sisters. “We have seen the devastating effects of exploiting the land on the people we serve throughout the world,” Longres says. The Sisters take to heart the words of Pope Benedict XVI: “The degradation of the environment is a pressing moral problem that threatens peace and human life itself. We cannot remain indifferent to what is happening around us, for the deterioration of any one part of the planet affects us all.”

Ministering to peoples of ancient traditions and cultures, the Sisters have become deeply aware of the reverence those people hold for God’s creation and the responsibility all of us share to care for it. At their assembly in 2002 the Sisters declared, “We are impelled to live in a way that testifies to the integrity and sacredness of all creation.” They have reaffirmed that statement by striving to put it into practice throughout the world.

In Darién, Panama, for instance, Maryknoll Sisters Melinda Roper and Jocelyn Fenix witnessed the growing destruction of nature’s ecological system when big companies began buying up the land for teak plantations, chopping down everything and contaminating the soil and water with chemicals. The Sisters started a pastoral center to teach farmers to renew the land by using compost and organic farming methods.

Recognizing the effects of land abuse worldwide, Maryknoll Sister Frances Kobets became an agriculturalist. Her current work in Zimbabwe has evolved into Orphans’ Education and Agriculture Support (OSEAS), a charitable organization assisting more than 1,200 or-phans through education, health and nutrition. A key element of OSEAS is practical agriculture. This program provides seed, fertilizer, methodology and encouragement for the children to grow vegetables for their own consumption and to provide a bit of money to help with school needs.

In Luzon, the Philippines, Maryknoll Sisters created a sanctuary to offer people a spiritual focus on caring for creation. 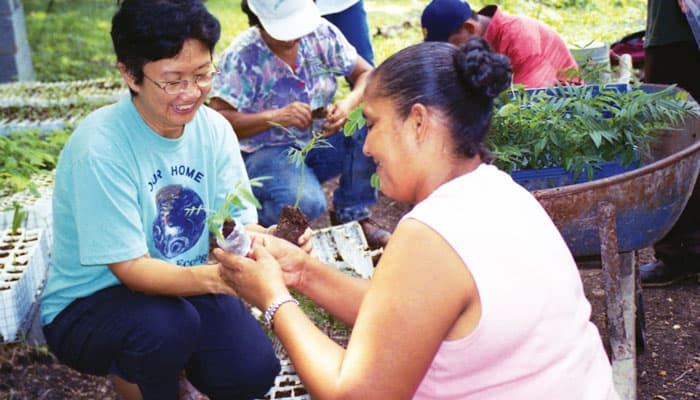 Back at home, Maryknoll Sisters have been seeking ways to help save the environment. Establishing a special-projects desk, which became the Environmental Office, was a first step. “The goal of our office is to enter into environmentally friendly practices here as we do overseas,” says Longres, who began working in the office in 2003 after serving for 21 years in Peru, where she learned reverence for the land from the Aymara people. Miller, who served in Tanzania and Panama and taught agriculture in Zimbabwe, joined Longres in the Maryknoll Sisters’ Environmental Office in 2005.

Working with other religious communities, the Maryknoll Sisters have established their own land ethic. “We believe we must look at our place in the span of creation and see the interconnectedness,” says Longres. “We are called to consider the good of the land not as an object but as an entity that hosts various aspects of life.”

The Maryknoll Sisters partnered with the Westchester Land Trust, a local organization dedicated to preserving open space now and for the future. Together they identified the 42 acres of wetlands and woodland on the Sisters’ property as worthy of preservation. Wetlands are ecologically significant areas for water storage to prevent flooding and provide groundwater recharge, habitat for threatened and endangered plant and animal species, natural filtration to purify water, and they are aesthetically pleasing.

Working with the Westchester Land Trust has been very helpful, says Longres. The group will ensure the integrity of the easement, the creation of which Longres regards as “a testimony to the Maryknoll Sisters’ commitment to live more responsibly and protect the earth.”

“I hope it will encourage others to do whatever they are able,” she says.

Miller stresses the historical significance of preserving a portion of the Sisters’ center. “It is our home,” she says, “the place that nourishes us, the place of healing and reconnecting when we return from overseas mission.” Pointing out that caring for the land was important to Mother Mary Joseph Rogers, founder of the Maryknoll Sisters, Miller adds, “I am grateful this land will be here for future generations.”